Last evening I had the opportunity to watch a wonderfully written, directed and acted French film called Le Fabuleux destin d'Amélie Poulain. When asked if I wanted to see this movie, released as Amélie here in the United States, I was not familiar with it; however, I did recognise the cover image of the main character Amélie Poulain, beautifully portrayed by Audrey Tautou. We follow the mousy-demeanoured character Amélie from the very beginning of her life in order to observe her unusual childhood that will serve to shape this young lady in a way you discover as the present-day bulk of the film progresses.

Aside from being a very clever and cute story about life, love and the lessons learnt as a result of dealing with both, this film somehow captures the essence of enjoying the small things in life and appreciating doing something nice, immaterial in size or grandeur, for a complete stranger. So if you are up for a beautifully cinematographed, cute and subtly humorous picture and do not mind subtitles (ou parlez le français), check this one out.
5 Comments https://mtsutro.org?p=233
No, no, this is not going to be a political conversation by any means. I just want to know what in the hell the President is doing in this picture: 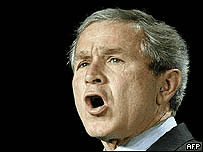 Looks to me like he is either really having an adept, powerful moment in speech or is preparing to receive a good rogering to the mouth, if you know what I mean.
6 Comments https://mtsutro.org?p=234
I have a confession to make: I have a new favourite television show. Now, as you may or may not know, I rarely watch television. I have caught a bit more however since I have been seeing The Boy. If you get Showtime, I encourage you to watch Penn & Teller: Bullshit! It is so funny and true at the same time, pointing out and invalidating things that should be commonly known to be bullshit.

No matter how popular a form of bullshit is - and regardless of what deep pockets or beloved figures support it - Penn & Teller are pit bulls for the truth, poised to tear down these myths in the most jaw-dropping fashion possible with their trademark wit and off-center comic sensibilities.

Beware faux miracle workers, yogis, dervishes, televangelists, zealots and cult leaders. Penn & Teller have you in their cross-hairs with a new series that strives to spark controversy, headlines and water cooler fisticuffs!

I did miss the first four episodes, but the two I have seen so far (addressing second hand smoke, baby bullshit, penis and breast enlargement products and aphrodisiacs) have been extremely entertaining. If you have Showtime, be sure to check it out. The next episode, whose trailer looks uproariously funny, will address Feng Shui and bottled water.
0 Comments https://mtsutro.org?p=235
Several conversations have recently started in the Forum regarding personal freedoms and rights. This is a frequent topic of discussion amongst many groups in the United States specifically with our legislators passing through bills that significantly grant sweeping authority to government agencies in the name of national, no wait, let me use a key buzzword, homeland security.

I will get back to that in a minute. What I wanted to do here was show that despite the backwards steps the United States is taking in terms of personal freedom of expression and other non-universal immunities from subjugation, other countries in the world are still fighting for the most basic of rights United States and other progressive countries' citizens enjoy.

In two recent examples in the news, it is illustrated how easy it is to slip back into less reformist times. In the case of these stories, antiquated laws and views are actively blocking the people of Malaysia and Iran from enjoying certain civil liberties many other parts of the world presently embrace.

In Malaysia, it is standard practice for their country's Film Censorship Board to review all films prior to public release. The Film Censorship Board is a division of Malaysia's Ministry of Home Affairs whose self-proclaimed mission is to "ensure peace and harmony in the nation." Films, videos and television programmes are scrutinised, then edited or banned to meet their standards for language, violence, sex and religious content.

Recently films such as The Hours (lesbian kissing), Daredevil (anti-religious role model), The Prince of Egypt (blasphemy), Zoolander (featured the Malaysian President as target to assassination) and Shindler's List (Zionist propaganda) along with television's Friends, Ally McBeal and Kylie Minogue's Live in Sydney have been edited or banned completely from theatres, broadcast television and video distribution. Pertaining specifically to the editing of same-sex kissing in The Hours, the leader of the Film Censorship Board said their actions were made to protect "the interests of the country and people from bad influences and negative elements shown in films." Even as opposition to these practices is getting a larger voice with the help of the outspoken Lim Kit Siang, Malaysian Parliamentary Opposition Leader and officer with the Democratic Action Party, they are still far away from being able to enjoy such a simple thing as an unedited film. Now, while one could argue the United States has similar regulations (see FCC Rules on Obscene Content and MPAA Ratings), the access to content is still generally available, even if an edited version is released as the primary product (Showgirls, for example, was released nationally as the watered down "R" rated version of the originally NC-17 rated original, widely available for purchase).

Meanwhile in Iran, sixty-eight (68) people were arrested for using a dating website to chat with and meet people. The operators of this site were also detained. The Basij militia, who enforce Iran's strict morality laws, have been regularly known to conduct raids on parties and social gatherings where both men and women attended together, but this was the first known instance of an operation against people who utilised the internet to meet. According to BBC News, General Ahmad Rouzbehani told Iran's official Islamic Republic News Agency, "Some people were using an internet site to allow girls and boys to talk and arrange meetings in a place in north Tehran where they had illegal relations." The arrests came after some tips were supplied to the authorities who made the move to curb these "unlawful actions."

While these acts of oppression may seem severe in contrast to what is going on in the United States, it must not make us too complacent as to not take action against our own forms of oppression such as racism, sexism and post-11 September governmentally sanctioned reduction of civil rights. As a prime example, in addition to the new offensive Patriot Act II, there has been word that the Transportation Safety Administration was going to begin tests on a new system, the Computer Assisted Passenger Pre-screening System II (CAPPS II), that rates a potential airline passenger's estimated security risk using data-mined information including personal financial and transactional information. This system would allow the government to unilaterally monitor, collect and use this information in any manner it saw fit and creates yet another dangerous precedent toward United States authoritarianism. You can read more about this system and its inherent dangers in this article.
0 Comments https://mtsutro.org?p=237
←12