I saw an advert on Comedy Central last night advertising a new video that you can purchase. As I sat there watching, my friend and I kept expecting Call of the Wild: Sex in the Animal Kingdom to be some sort of joke. It was on Comedy Central and we were watching Saturday Night Live, but to our horror, this was no joke. The advert continued and sounded just like a Girls Gone Wild spot, with a twist.

What is on this video you ask? I could let the official website do all the talking, but I think you know already what this video is about. Be sure to check out the "Did You Know?" page on the site.
0 Comments https://mtsutro.org?p=202
A snippet from a cute conversation with my friend Jeremy from a few nights ago:

Jeremy: lol... how are your injuries?

David: I am sore today because I went to my first chiropractic visit to help restore shoulder functionality. Took a bunch of x-rays and did some stretching and other diagnostic exercises. He helped me before when I injured my back, so I am excited I have him helping me again.
David: My gash is nearly healed... so quickly, I do not understand why.

Jeremy: when I was in grade school
Jeremy: we all used to attach sporks to our hands
Jeremy: and run around clawing each other at lunchtime

0 Comments https://mtsutro.org?p=203
I had planned to make this update a while ago, but I really did not have very much new information to add. At least now I have a bit more, so here it goes. If you do not know what the hell I am talking about, read the original story first.

First, I want to thank everyone again who has been so supportive. I went out for the first time really this past weekend and had myself a blast, but more about that later. I am hoping that I will be able to return to some semblance of a normal routine soon.

This past Saturday afternoon I went down to the wrecker yard where my car had been towed in order to see the damage in the light of day and without the it-just-happened glaze that I realise more and more I had been looking through immediately subsequent to the accident and, most importantly, to fetch my personal belongings (like a good selection from my CD collection). It was so much worse than I remembered. The entire driver-side of the engine compartment was pushed in a good two feet, destroying many of the essential components such as the entire belt system, radiator, compressor, alternator and so much more. A major detail I had failed to notice on the night in question was the fact my entire windshield was cracked, fissures covering the entire surface of the glass. As I went inside to retrieve my belongings, I noted several other items such as my CD player being recessed in the dashboard a good two inches, the driver door's inability to shut anymore and various cracking and damage to the dashboard and centre console. During my collection process, I found two things that had gone missing some time ago: my small carrying knife and a flat comb. They must have been wedged securely under the seat, but the force of the impact (my speed was likely between 35 and 40 miles per hour) jarred these objects free. The wrecker yard's rules specifically stipulate no installed items (electronics, tires, etc.) can be removed until the insurance company has made final arrangements to have the vehicle turned over to them, so I left my pedal covers, hubcaps and CD system (if it even still works) intact. Oh and my copy of Linkin Park's Reanimation disc is still stuck in the player. Depending on how things go, either my insurance company will be purchasing me a new one or I will somehow figure a way to get it out of my CD player.

Later the same day, my best friend Chris with whom I went to high school picked me up and we went out to find some trouble. As we were discussing a destination, I said we should go by and visit the tree I had struck to inspect the damage. After hitting my post office box downtown, we made our way to the scene. A good section of the tree was now stripped of bark; that portion was swelling. The wrecker company did an excellent job at removing most of the debris, but we did manage to find a few little pieces of my car. After this we headed downtown to Room Three Nine for a Stella Artois and then over to Southern for "Lesbo-a-go-go," which lacks men, but not entertainment value.

The next afternoon a newer friend of mine, whose relationship of ten years appears to be coming to an unfortunate conclusion, told me of plans to head downtown to pick-up another friend and then hit the Sunday T-Dance at Parliament House. The friend we went to go pick-up just moved to the swank Waverly Apartments in downtown Orlando. I took some pictures from his 18th floor apartment, had a cocktail and then got on our way to meet the fourth in our party for the evening. We all had a really great time, arriving around 1845 in time to catch the first show, free buffet and of course, the $2.00 single-liquor well doubles. I ended up staying that night at the Waverly, falling asleep to the sparklingly lit skyline and waking up Monday morning to the sun rising over downtown Orlando. I think it was the first time this place has ever felt like a real city to me, but that soon faded.

My insurance company is dragging its feet with regard to the totalling of my car, so I am going to call them again today and try to get some information from them. I also have some other questions that I need to address as my loan and insurance payments continue needing to be paid yet I have no vehicle and I assess more medical bills.

Yesterday was my first appointment with my chiropractor, Dr. Steven Levine, since the accident. Dr. Levine helped me several years ago when I was having back and neck issues. When I came in for my appointment today, I enquired as to the last time I had come into the office: April 2002. My, how time does fly. He went though some preliminary diagnostic tests, a stretching/muscle relaxation session and the requisite x-ray images. I am again scheduled to go in Thursday to take a look at the x-rays and begin a regiment in order to restore full functionality to my dominant right shoulder, arm and hand.

Pretty much most of my pain is centred in that region, making it still difficult to turn my head completely, bend over quickly or carry heavy objects. Turning over and getting out of bed is also still not real fun. I am confident as always in the abilities of Dr. Levine to help me as he has in the past.
4 Comments https://mtsutro.org?p=204 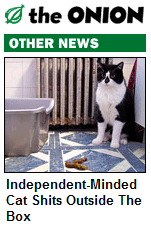 [ the onion ]
0 Comments https://mtsutro.org?p=205
Although just as unlikely as my move to San Francisco is in the near future, I love the UK and would consider living there as well. 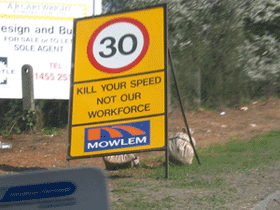