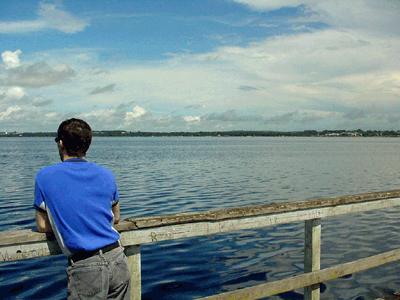 Well my weekend trip with Chris to Clermont was quite wonderful. A look at the local radar Saturday morning revealed some large pockets of showers and thunderstorms were going to roll through central Florida around the time we would be en route to Clermont. The speed and direction of the storms, however, seemed to indicate we would drive through them on the way there, but that by the time we arrived they would be gone completely. Fortunately, I was correct and the weather was rather nice the entire time.

After a breakfast stop at Dan's Restaurant, we made our way to Clermont and first hit the Citrus Tower. It was as much a pleasure to visit as it had been for me during my visit earlier in the week whilst taking pictures for work. Chris enjoyed it very much as well, which really made me happy. We stayed up on the observation level for some time peering out at the view, stopping to drop some coins down a chute that allows you listen to them as they make their way all the way down to the first floor.

We continued to the historic downtown area and to the fishing pier at Lake Minneola. After enjoying that for a while, we moved on to the Lakeridge Winery for the tour and tasting. After browsing through the shop for a bit, the tour began with a fifteen-minute video highlighting the history of wine making in Florida and of the Lakeridge Winery specifically. I found this video very interesting and learned a lot about wine I had not known previously. After the video, a guide took everyone through the production area of the winery detailing the various functions of the equipment and providing information on their output.

Presently they produce 100,000 gallons (379,000 litres) of wine every season. Even with that output, they are still running out prematurely so they have added another production line that doubles their output. Their product line includes ten varieties ranging from dry to sweet and while they do hold a distribution license, the Lakeridge Winery does not sell its product in but very few, select retail stores. The rest of their business comes exclusively from on-site sale and direct shipping.

After trying their varieties of wine through the tasting, Chris and I both went back to the shop and made some purchases. I got a bottle of the Cuvée Noir Reserve and Muscadine Chablis while he elected to get three of his favourites. I am very much looking forward to enjoying my wine.

We came back in the late afternoon and just enjoyed the rest of the day. I was really happy to have been able to not only go out and do something different, something rather simple yet so enjoyable, but also to share it with someone who found an appreciation in it as well. I believe this trip will be the first of many as I plan to purchase a book that has various back road day trips to places around central Florida. Simple, inexpensive and incredibly enjoyable, I think I may have discovered something else I have been missing.

Footnote: Pictures from this trip are located here.
0 Comments https://mtsutro.org?p=148
←1234