And here I thought I was compulsive! While eating dinner last night at Cracker Barrel, I could not help but watch this man who was sitting several tables away. He was average in height and build, probably around 45-50 years of age, Caucasian and had a shaved or bald head.

The first unusual thing I noted about this man was the fact that for a period of several minutes, I was absolutely convinced he had fallen asleep right there at the table. He was sitting alone, holding his head up with his hand and arm, eyes closed. I kept looking over to see if he had just closed them for a second or not.

When his food arrived I noticed a few more things that got my attention. First, it appeared he had ordered the same meal as I had, the new special Homestyle Chicken dinner: two plump, hand-breaded boneless chicken breasts fried to a golden brown and served with your choice of three country vegetables, plus biscuits or corn muffins. I had ordered mine as pictured with mashed potatoes and gravy, green beans and baby carrots. It was a damn good meal I am looking forward to having again soon. 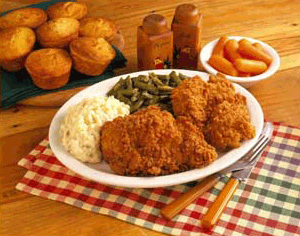 Unlike the picture, my dinner came with all the sides included on the main plate. Sometimes they will put a vegetable that has liquid, like corn, in a separate dish, but for the most part they are all grouped on one nice large plate. This guy specifically ordered everything be in a separate dish. The waitress placed all of the items (five dishes in all) on the table and left. He proceeded to order the dishes in a manner I could not quite discern from my distance. There was a very specific and intentional order, though.

Once his arrangement was complete, he went into consumption mode eating one item at a time until completion before moving on to the next item - vegetables first, then potatoes and finally the meat. I left before I got to see what he did with the biscuits.

I enjoy seeing people do things like this because they remind me that as compulsive as I can be at times, there are always people that probably should be taking medication for it.
19 Comments https://mtsutro.org?p=129
I am not sure why I found it so amusing, but while browsing around the IRS website looking for information on business tax procedure I stumbled upon a frequently asked questions page that discussed if you have not filed your taxes in some time. The last question answered is as follows:

Will I Go To Jail?

Our long-standing practice has been not to recommend criminal prosecution of individuals for failure to file tax returns- provided they voluntarily file, or make arrangements to file, before being notified they are under criminal investigation. The taxpayer must make an honest effort to file a correct return and have income from legal sources. A letter from your IRS Service Center concerning your taxes is not a notice that you are under criminal investigation.

For a film like Alien, no introduction or commentary is required. Go now and see it while the special edition "director's cut" version is in theatres. I am glad to have had the experience.
2 Comments https://mtsutro.org?p=131
While going through folders of previously saved, but no longer necessary computer files I came across the beginnings of a letter I started to write while living in Jacksonville. Last saved at 02:47:56, I stopped and went to sleep to continue writing and send it the next day. It was never completed or edited though, for obvious reasons. And it likely never will.

First, I appreciate your taking time out of your busy schedule to address the correspondence. As a citizen of the United States, I can appreciate the time and energy required by our Military forces to ensure the security of our democracy.

The purpose of this letter is to request, at the your and the services convenience and availability, a tour of your vessel when docked at the Naval Station Mayport. I have had an interest in Navy vessels for a very long time and even had the opportunity to tour, while docked at the Naval Station Alameda, my father's old Coast Guard ship, the Coast Guard Cutter Midgett (WHEC-726). I recently relocated into the Jacksonville area to accept a great employment opportunity and thought it would also serve as an excellent opportunity to make this request.