I used to really like Peeps but as I got older my tolerance for sugar and sweet things diminished from an already low level. Now I can stomach one simply for the hell of it. Usually after gorging myself on ham and Polish sausages.
2 Comments https://mtsutro.org?p=88
I have nothing to add to the following save to indicate it was written by my best friend Erica and that I was unaware of the events contained therein up until the time I read it just moments ago.

This is a two part story. The tale of yesterday and today, for there is much more than a sunset that seperates them. The shift, one that turned the tide within the rumbling oceam of my self confidence, has happened, and with the cessation of life from one body may have come the wake up call that allowed me to take an opportunity by the balls...perhaps...

Work. 11 AM. After just returning from the bathroom, I find a meter maid screaming on the sidewalk. She's on her back, thrashing about. Spasms seem to retake her tensed up form each time someone tries to talk to her or to comfort her. Understand, I only saw the woman in blue, with her white socks and the tears streaming down her face. She was black, ebon hair peeked from beneath her uniform hat. I did see her cry. Mascara streaked down her cheeks. Eyes squeezed shut. The two people near her tried to get her to calm down. I still didn't understand why she was having a panic attack on the sidewalk on Pine Street. Then the man to her left, trying to soothe her pain, moved. Then I understood.

Across the street, a woman lying on the sidewalk. Lay is wrong. She was not lying there; she was dying there. Such beautiful hair, dark, shiny waves, like my own, fell from her pale face. Her skin looked soft. Her face swollen, like someone who has cried too hard. Each labored breath she took seemed unnatural. "She's moving. She's moving" someone said behind me. But she wasn't, not really. Her chest did rise and fall, at uneven incriments. It was her body trying so hard to keep air in her lungs. The infrequency did not allow for a fully functional breathing. Just her body trying to keep itself alive. I could see her dark lashes flutter. I wondered if she was dreaming. Did she know that people gawked at her from Maui Jack's? Was she hurting? Her body was all unnatural angles. She had shattered.

The crowd did not rush to help her. They were all frozen as I was, just staring at the wounded woman, no more than 35, dying on the street. Someone finally took her pulse. A woman, in her mid 40's brushed the hair back from her face, like a mother would for a sick child. She kept her hand on the broken neck for eons it seemed, but shook her head. Too shattered to turn over, for fear of breaking or rupturing something further, the crowd left her alone, waiting helplessly until professional help arrived. The breaths, more infrequent seemed to stop.

The paramedics that rushed her into the waiting truck, stayed at that spot for too long. They did not turn on the sirens as they left. Just the lights. No horns. Just the blaring lights guided her to the hospital. I think I probably watched her take her last breath. They did not rush to take her away, doing a 3 point turn in the middle of the street. They didn't rush, because she was already gone.

I am still not sure if she jumped. What I do know is that she came down off the 6th floor of the Pine Street parking garage, hit the railing on the second floor, denting the steel pipe, hit the lightpost, coming down to rest just at the foot of the lightpost, in front of the door to the garage. The meter maid, parked next to the parking lot attendant, saw her fall, which sent her into a panic attack. The wounded woman fell so hard that her tennis shoe landed on the other side of the street, right side up. What I found strange was that she came down with her purse, it's contents littered the street. Her purse exploded open, just as her body imploded on impact. She was wearing a white shirt, jeans, and tennis shoes. Her hair was dark mahogany brown. Very wavy. Very familiar. The image of her eye lashes fluttering over pale cheeks with sit with me forever. A reminder that I almost jumped once, or twice. I feel for her. For the pain that drove her (assuming she did jump) to her death on a public street. It was 11 A.M. I had just gone to work. And I am sure I watched a stranger die.

I can't tell you how this has effected me. I found myself horrified by the callous remarks from my co-workers. After some thought I realized it was how they distanced themselves from the action on the street. Death stared at them from the body of the shattered woman. A reminder of mortality, and these kids, all partiers and drinkers, did not want that kind of buzzkill on a Wednesday morning, so tact went out the window. But while they may not be effected, I am. I sent many blessings to that woman, that achingly familiar woman. I fought long and hard not to jump. So many years of wanting to, so many years of not understanding what was at stake. So I sent her blessings, hoping that if she did pass, that it was quickly. I hope she met her maker and that she gained the peace and love she obviously didn't have in this life. If she does live, I wish her a speedy recovery and hope that the fall changed things for her, for the better. I hope it refocuses her life, as it has my own. But most of all, I prayed for her pain to be gone.

After the tears and the shock had faded, I realized I have nothing to lose, so my interview with OUC had to happen and I had to rock their world. And I did. For some reason, seeing the shattered woman made me realize that I don't have the luxury of letting life lead me by the hand. It's balls are mine to take. So I went in, played up my computer skills, my orginzational skills and made them laugh as much as possible. I think I nailed it. I have never been this pleased with an interview before. It is down to me and 2 other people. A 1 in 3 chance isn't bad. But I didn't hold back this time. I wasn't meek. I wasn't shy. I told them what I thought they needed to hear, and didn't regret one word that came out of my mouth. If I get this job (which I really think will happen this time) I will find out next week. It's a lot more money. Much better benifits. Perfect hours (6-3, so I can still take classes). It's not downtown but its close. So cross your fingers and your toes everyone. I think the tide is turning...

And send a blessing to the wounded woman...I think she needs it more than I do.

3 Comments https://mtsutro.org?p=89
Local radio station Real Rock 101.1 FM (WJRR) has a new promotion called "Cheap Ass Gas." Select gas stations around town will be selling regular unleaded petrol at $1.01 per gallon (limit ten). I am not sure if this will be a one-time gimmick or if it will be ongoing.


UPDATE: I checked out both of these locations today and decided it was not quite worth the wait. The line to get in to each station was better than a mile long. Traffic was terrible. I waited in one of the lines for a good thirty or so minutes without moving before deciding to try the other. Had I waited in line I think 1900 hours would have come and gone before I got my chance to get fuel. Hopefully they will do this again soon.
3 Comments https://mtsutro.org?p=90 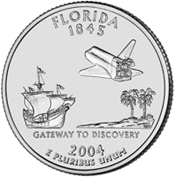 The Florida quarter made its premiere today. Governor Bush unveiled it this morning at the Kennedy Space Centre complex. Inscribed with "Gateway to Discovery," the new $0.25 piece depicts the NASA Space Shuttle (which has been and continues to be grounded following the Columbia incident) and a Spanish Galleon sailing ship. Tickets to attend were free, but with my current financial situation I did not want to make the drive east.