I cannot believe what I just did, and on purpose no less. I have always been a sort of packrat. Not so much the kind that keeps thousands of mementos from throughout time cluttered in my house, but in the way that I had every e-mail I sent and a transcript of every online conversation I had since 26 November 1999. Until now.

I decided to delete every e-mail sent before 2004 and remove every chat log that had not been updated in 2004. This may not seem like a big deal to some, considering the fact most people do not retain such records. It was nice to be able to refer back to a time, place or event and recall things or look-up information since forgotten, but in the end I have realised recently my live can be simplified greatly by leaving a lot of my historical baggage in the past.

I have spent a good portion of my weekend doing the same thing to my house; purging my life of things no longer used or wanted. I have really never been one to like a lot of "stuff," but you could not tell that by looking at all the things I have uncovered. Bags and bags of junk now sit at the curb, like all those ones and zeros now entering the electronic hereafter, a shadow of life now discarded.

I have also started to apply this refined view in my interpersonal relationships. Holding on to things to the point where years later they still bother me is unhealthy. So I hold no more ill-will and no grudges; I have forgiven all sins.

Next I will attack some remaining boxes, a closet, my documents partition on my hard drive and my mobile telephone address book.

Letting go feels so good.
2 Comments https://mtsutro.org?p=57
I am starting a new web-based e-mail service called WGAFMail. That is, "Who Gives a Fuck Mail." I am so tired of reading about GMail on countless websites. I cannot really fathom what the big deal is still. Wooo... one gigabyte. If you need that much space to store e-mail messages, your mother did not teach you how to throw away things when you are done with them. I also do not understand why anyone who has their own domain name would want a third-party e-mail address so badly anyway. I have one for emergency use in case something on my server goes pear-shaped, but this obsession in the blogging community over GMail and the precious goddamn invites people crave so badly is ridiculous. Get over it already and resume writing interesting stories about your life, work and day to day experiences.
1 Comment https://mtsutro.org?p=58 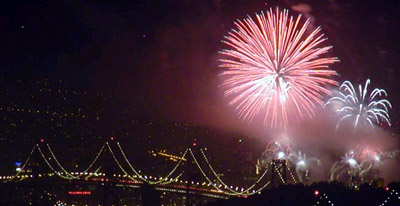 The people around here are getting an early start launching fireworks tonight left and right. It sounds like I live in a bad part of town where rival gangs are having a major disagreement over something and have decided to solve the problem with bullets.

Anyone doing anything exciting for the three-day (for many) holiday weekend?
1 Comment https://mtsutro.org?p=59
I am sorry, but I find the following Associated Press story just a little suspect. If it does happen to be true I will be amazed by the coincidental trinity.

HANSON, Mass. – A woman who allegedly found a live toad in her McDonald's salad two weeks ago says she is upset at the slow response to the incident.

Dorinda McCann, 34, found the two-inch long toad in a takeout salad bought at the restaurant chain's Hanson location on June 16.

"I was sick – what if I had salmonella poisoning? Did anybody call?" she told The Enterprise of Brockton.

Town health agent Vincent Flaherty said he is waiting to learn the origin of the toad, which is being tested by the California-based company that processes the lettuce used in McDonald's salads.

Restaurant owner Mark McBee tried to contact the McCanns on several occasions and never received a return call until Tuesday, Tara Richards, a spokeswoman for McBee, told The Associated Press.

"The safety of our food is very important to us and we are taking this matter very seriously," she said. "We are working to gather all of the facts. The health department completed a thorough review of restaurant operations and gave the restaurant a clean bill of health."

Meanwhile, McCann, her husband, Thomas, and their two daughters, once regular McDonald's customers, have stopped going to the restaurant. The McCanns have also consulted a lawyer, but have not taken any legal action.