Today I have been cleaning my apartment and getting ready to leave tomorrow on a nearly one-week business trip. The destination is Bartow, Florida, population 16,455 (2006), named for Confederate political leader, attorney and officer Colonel Francis Stebbins Bartow (1816–1861), the first Confederate officer believed to die in the American Civil War. Located about an hour east of Tampa and southwest of Orlando, Bartow was established as Fort Blount in 1851 in an effort by new settlers to discourage attacks from native Seminole tribes. Fort Blount was named county seat of Polk County in 1861 and renamed Bartow in 1867, two years after the end of the war. In addition to several state and local government offices, my destination in the scheme of things, the nearby phosphate mining contributes to the local economy. The city served as a shooting location for the 1991 film My Girl and was home to recount queen Katherine Harris during her high school years. Travel has been on my mind a lot recently. In fact, this past Wednesday, 23 January 2008 at 2235 hours EST, I received electronic confirmation from Northwest Airlines of my flights on 13 March and 21 March 2008. After learning my friends Steven and Emma would be moving mid-year, my Mom encouraged me to consider using my tax return to fund a trip to visit them rather than repay a debt to her as planned. This was a very thoughtful gift, one I would be remiss to pass up. She made a compelling argument after all, though in all honesty I did not require much, if any real convincing. To thank her for her unsolicited generosity, I asked Mom if she wanted to join me. And that's how it came to pass, that after originally concluding it would be impossible to pull off in the allotted timeframe, I am spending one week of March in Tokyo, Japan. The suburban city of Sagamigaoka, Zama in the Kanagawa Prefecture, to be exact. I am not talented enough a writer to provide adequate descriptions of the excitement and anticipation I feel about this adventure. To visit a place where the language and culture are so divergent from one's own is for me an extremely satisfying prospect. 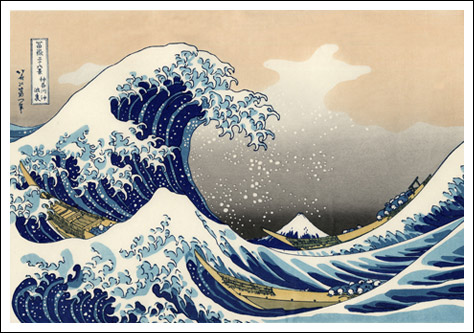 The Great Wave at Kanagawa
from a Series of Thirty-six Views of Mount Fuji
by Katsushika Hokusai, c. 1830–32

Among the 47 prefectures of Japan, Tokyo is the most populous. Some eight million people live in the twenty-three special wards of Tokyo, with over four million more populating the rest of the prefecture. Tokyo was founded as Edo, a small fishing village, in 1457 and named imperial capital in 1868. Little else about the trip has been planned except for the arrival and departure dates, times and flights. I am going to be researching what to see and do, plus I know our hosts will have invaluable input having lived in Japan for over three years now. It may be the cliché American thing to do in Tokyo, but I do plan to visit the New York Bar on the 52nd floor of the Park Hyatt Tokyo as featured in the 2003 film Lost In Translation. I like Tokyo's modern skyline, sparking with lights and red beacons in the darkness of night and wish to experience that vista in person, despite the possible ¥2000 JPY (~$20.00 USD) cover charge. I would have liked to visit the Hiroshima Peace Memorial Park, but that would require a sixteen hour roundtrip commute. However, including Mount Fuji, elevation 12,388 feet (3776 metres), there are numerous museums, national parks and other local destinations to keep us completely busy the entire time. Indeed my ever-growing list of pre-trip tasks includes a note to investigate additional memory chips for my camera. With any luck, the flights from Detroit Metropolitan Wayne County Airport (KDTW) to Narita International Airport (NRT/RJAA) and back will provide entertainment themselves, as I anticipate our flight path will take us over Nunavut and the Northwest Territories, past the North Pole and over the Arctic Sea and mountain ranges of Siberia. I feel very fortunate to have this opportunity. It would not be possible by my own will alone, so I am grateful to those who helped make this incredible journey possible.