It is no secret I am not the biggest sports fan in the world. In fact, I could really care less. Nevertheless, this fact does not preclude me from enjoying certain sporting events from time to time. I remember with fondness attending a 1988 home game of the Buffalo Bills in Orchard Park, New York. It was a cold, snowy day at Rich Stadium, but the energy created by the fans radiated throughout. Of the nine home games played that year, the Bills won all of them including the divisional title. Looking back now, it was a transformative time for my hometown franchise. The year saw Jim Kelly, Thurman Thomas, Andre Reed, Cornelius Bennett, Bruce Smith and Scott Norwood under the direction of head coach Marv Levy complete a 12 and 4 season. It was this team that would go on to a lackluster 1989 season followed by four consecutive, albeit unsuccessful trips to the Super Bowl. I also remember my pizza arriving at the end of the first half during Super Bowl XXXVIII on 01 February 2004. I was busy setting the table and readying to eat so I did not change the channel when the half time show started. Seemingly insignificant then, I am now glad to have been witness to the flashpoint of the FCC controversy sparked by a certain wardrobe malfunction. When it came to this year's Super Bowl, I was interested only in the outcome. Like many others, I wondered if the undefeated New England Patriots—who lost to the 1988 Bills by three—could pull off a perfect season. As you probably know, they failed to do so, losing by three to the New York Giants. Not interested enough to seek out a place to watch the game on television, I instead went to ESPN.com and launched NFL GameCast. This nifty web-based application provides live graphical and textual data about the plays and the people making them. As I watched the icons and lines appear on the graphic of the field, the accompanying text updated to indicate the progress of play. It would have been a rather sterile experience were it not for the nearby clapping and cheering of neighbors, obviously rooting for the underdog. With just more than thirty seconds on the clock remaining in the fourth quarter, I heard the loudest cheering yet. One or two seconds later, the cause appeared on my screen—Eli Manning completed a successful pass to Plaxico Burress giving the Giants the winning lead. I can partly sympathize with those New England fans now well on their way to drinking the pain away, for it was the New York Giants who went on to win by one point during the Bills' first championship outing, the closest margin of victory ever in a Super Bowl. 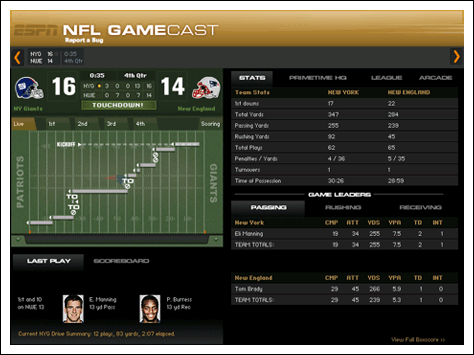 Postscript: Although no longer used publicly, each article written here is tagged with one or more categories. When preparing this work for publication, I discovered no such category existed for sports-related topics, lending further credibility to my "not the biggest fan" observation. As a result, the category Sports and Recreation has been added.
Photo Credit: David July
"The Sunday Night Lights" https://mtsutro.org?p=402