, there were only forty-six days until departure. While that may be sufficient time to plan a trip in the United States, it felt a little sudden for a trip to the other side of the world. However, I was not particularly concerned about getting along. In fact, I think we did remarkably well all things considered. The two quick mishaps I can recall immediately are a few minor miscommunications and twice exiting the subway car one station too soon. As time passed, my Mom—who as you will recall accepted my offer to join me—called me with ideas for places to visit and things to do. Her extensive experience with personal, global travel for pleasure was an invaluable tool in deciding what to do and when. I will admit it was one considering factor in my original invitation! By the time I loaded the car and headed toward Intestate 10 eastbound on Thursday, 13 March 2008, a basic idea of our daily itinerary existed. First on our list upon arrival was a visit to the monetary exchange booth and the East Japan Railway Company

(NRT/RJAA) at 1730 JST on Friday, 14 March 2008 due to travel through the International Date Line. Overall, the flights were uneventful. I was looking forward to taking pictures of the mountainous regions I anticipated flying over, but was quickly disappointed to learn we would likely not fly so north as to penetrate the Arctic Circle nor pass over the mountains of Siberia. This information was provided on the in-cabin video system, which consisted of a three-color projector in each cabin section and television monitors in the ceiling above the aisle near the flight attendant galley and toilets. 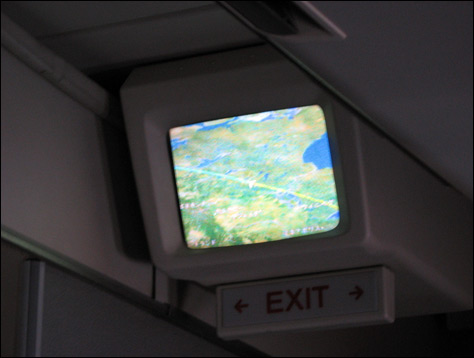 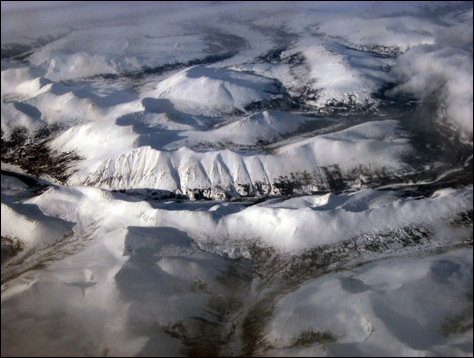 Of course, the in-flight "entertainment" took precedence over this useful and interesting up-to-date information so it made brief appearances at the start of the flight, a few times between television sitcoms and Discovery Channel shows, after the movies and right before and after landing. 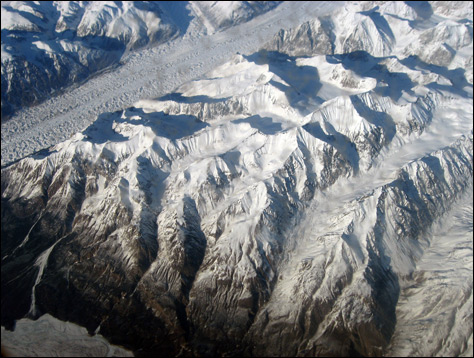 Using Google Earth and aeronautical charts, I have been able to pin down part of our course to Tokyo and identify the airports we saw from the airplane. In between airports, we saw lots of snow and some pretty impressive mountains. The first image of an airport I captured is of lesser quality (not pictured here), after early surface vistas and before the mountains of Alaska. I was not able to fix the location of this airport. I originally suspected Whitehorse, Yukon, Canada due to the distance travelled between this photograph and the second airport spotted, but finally ruled it out by satellite image comparison. 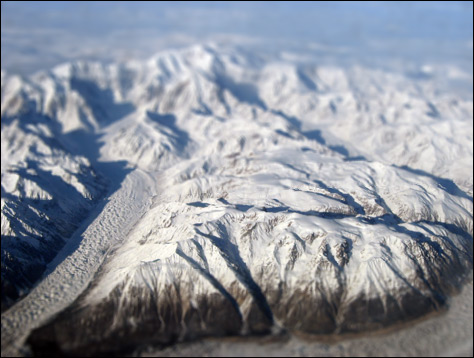 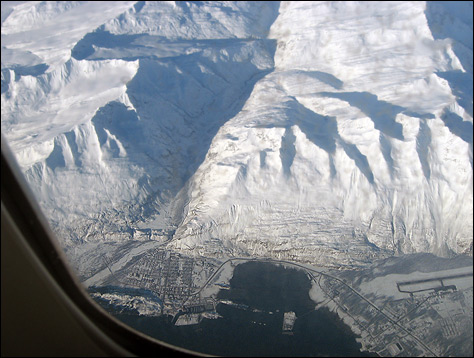 The last and largest airport and city we flew over was Anchorage, Alaska. The 282,813 municipal residents comprise more than two-fifths of Alaska's total population. They enjoyed similar weather with a high of 31°F / -0.5°C and low of 21°F / -6.1°C for the day. 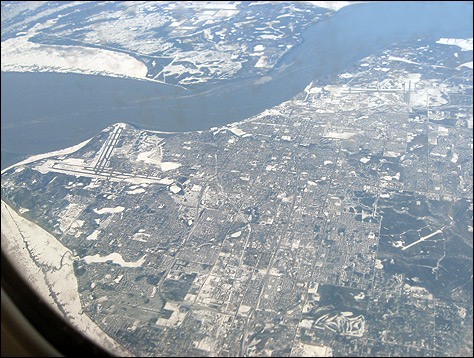 Having fixed our location at two US airports, I was able to calculate the mileage and speed. We passed over the Valdez Pioneer Field Airport (PAVD) at 2117 EDT (1717 AKDT) and came to Ted Stevens Anchorage International Airport (PANC) at 2131 EDT (1731 AKDT). At a distance of 108.5 miles, it took us 14 minutes to fly from one to the other at a speed of 465 MPH / 748 KPH or 0.6 Mach. It was 1758 JST / 0458 EDT on Friday when I passed the "Welcome to Japan" sign (in the article header). We exchanged our money and obtained our JR passes without issue, meeting Steven

in the process. He had graciously agreed to meet us at the airport so we could navigate the intricate and varied subway/train systems of Tokyo with a guide the first time. For the record, I had been up for twenty-two and a half hours at this point and was happy to get to Steven's apartment and to bed. This is not to say I did not enjoy those initial train rides. From the airport we travelled by subway to Shinjuku Station

, where we transferred to the Odakyu Limited Express to Machida Station

. Once there we took the Odakyu Electric Railway

where we finally left the train system via the south exit and took a taxi—our first of only two total trips by cab in Japan—to Steven's apartment. After some quick catching-up with Steven and Emma

, a needed night's sleep began. The excitement would have been unmanageable if it were not for my complete exhaustion. We slept a little longer than anticipated but needed some amount of rest before beginning our week of walking. Heading out by 1030 JST, we planned to visit Tokyo Tower

and surrounding areas. Built into this day was the expectation of some navigational or communication troubles, but we ended up doing quite well I think for our first full day out alone. Our morning walk from Steven's apartment in Sagamigaoka

convenience store, a school, numerous homes and local businesses and finally the Sagamihara business district. There you could find a Seven & I Holdings Co., Ltd.

and much more. The walk to and from the station would become a daily routine for us.

We got to Tokyo Tower just before 1430 JST to find a long, but organized queue. There was a man with a large sign standing at the end to identify where people should join the queue and two staffing a gate before the ticket booth where only so many people would be permitted through to purchase tickets. Once inside the lobby doors, female staff members in bright blue uniforms guide you to the zigzag rope queue that leads you to the lifts to the main observation level at 492 feet / 150 metres. From there we would purchase tickets to the highest special observatory at 820 feet / 250 metres. 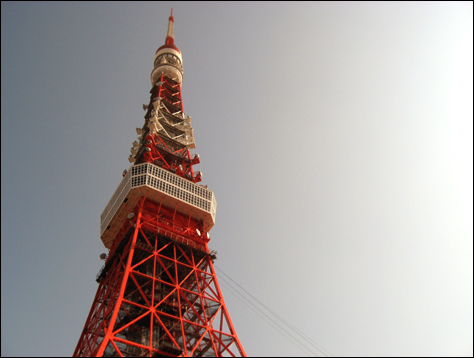 . It turned out to be less clear than we thought, but the panoramas provided were still amazing. Situated in Shiba Park

, Minato, Tokyo Tower was constructed in 1958 and claims to be the world's largest self-supporting steel tower. It is obviously modeled after the Eiffel Tower, Paris, France but at 1093 feet / 333 metres is 43 feet / 13 metres taller. An added bonus was the ability to walk the outdoor stairs of the tower from the main observation level to the roof of the main building and into a small amusement park at Foot Town 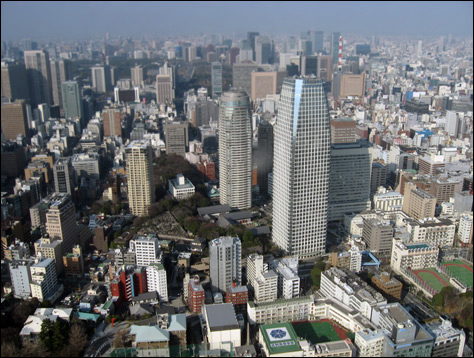 After eating a Japanese pasta dish at Pizza-La Express and a quick walk through the neighboring Shiba Park, we moved into Minato City and explored the Zojo-ji temple

. Zojo-ji is a Buddhist temple founded in 1590, but severely damaged and repaired following World War II. We caught the end of a ceremony being performed by monks complete with chanting, bell ringing and incense. 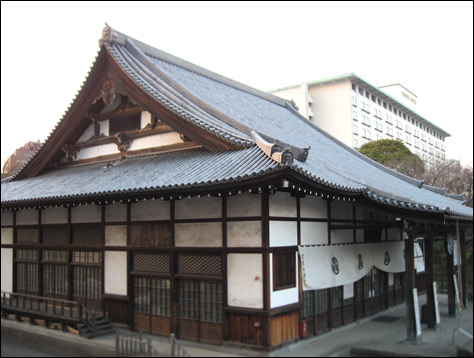 On our way back to Steven's apartment, we made a detour at Shinjuku Station to walk around that popular area at night. We did not stay out too late for fear of missing the train home. It was a great first day packed with fun, learning experiences and 207 photographs. 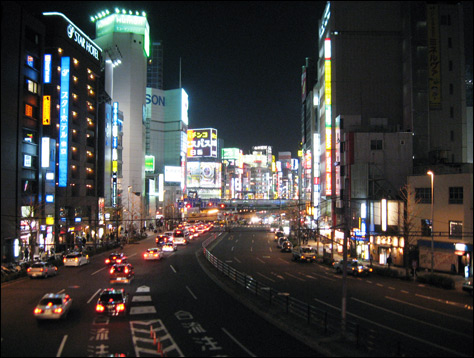 Once this article is online, I am heading right to bed. This will hopefully mark the start of my internal clock’s re-acclimation to Eastern Daylight Time. After leaving Detroit some two hours late due to snow, not to mention the two and a half hour drive from Jacksonville to Tallahassee, I made it to bed just before midnight on Friday, 21 March. When I woke up at 1800 on Saturday, I was not at all surprised. Nor when I stayed up all night and went to bed at noon Sunday. I woke up today at 0430 and immediately decided to get up, shower, dress and ready myself for work. By the time 0530 rolled around, I was anxious to do something more than sit and read the news online, so I headed to work and started an hour early. Leaving early is always nice, so I managed to get some errands run, too, before returning home. Needless to say, the trip to Japan was as unbelievably wonderful as I had hoped and expected. There is obviously much to say about the adventure, so I will be writing several installments over the next few weeks. Included with these articles will be select photographs from the nearly 1500 I took while in the Tokyo metropolitan area and Hiroshima. I am looking forward to getting these memories in print, if for no other reason, my own reference and backup. Until then,