It was overcast and cool on the third day of my adventure, Monday, 17 March 2008. Walking down the street toward Odakyu-Sagamihara Station

, we decided to take a slightly different route to enjoy the local neighborhood. The streets were bustling with life and energy as people went about their business. After browsing some of the shops and markets, it was time to catch the train and proceed to the day's first destination, the Tokyo Imperial Palace

. Making our way to Shin-Yokohama Station

, we transferred to the JR East

. By now, the trains were becoming less of a mystery and more of a tool, though there were some exceptions. While large and complex, the various interconnecting public transportation systems are relatively easy to navigate once you have an idea of how things work and where places are in relation to one another. Not to mention, signage in English and Japanese helps. 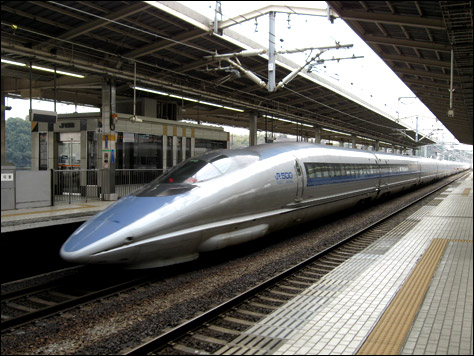 Not quite thirty minutes after boarding the Shinkansen, we were navigating the enormous Tokyo Station to the Marunouchi

was undergoing renovations so scaffolding masked the brick structure built as the station's entrance in 1914. Continuing west from the station toward the Tokyo Imperial Palace on Gyoukou-dori Avenue

, we leave the city behind and enter the Tokyo Imperial Palace grounds. The grounds exist as an oasis of sorts in the city, a large open green space surrounded on the perimeter by a moat and the skyscrapers beyond. After taking pictures around Babasaki-bori Moat

and continuing through the plaza, we pass the Sakashita-mon Gate

on our way to the Nijubashi Bridge 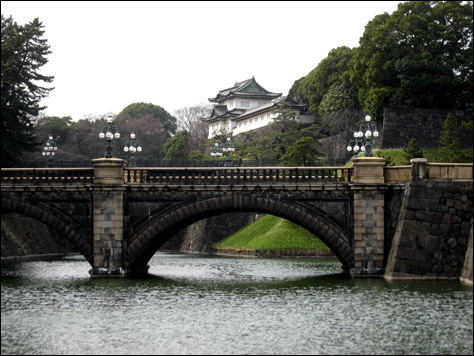 , a large unpaved street filled with rocks except for one small paved sidewalk, a police-escorted motorcade of vehicles emerged from the Main Gate

at Nijubashi Bridge. The cars were too far away to tell at the time, but a close inspection of my pictures shows the flag of Canada

on the second of eight motorcade vehicles. The next hour was spent walking the vast grounds, capturing images and enjoying the green space and architecture. Although it seemed large while walking around, considering we only saw a small portion of the land, the property once spanned the Marunouchi commercial district, including Tokyo Station and the surrounding landmarks within the outermost boundary (then the old moat). 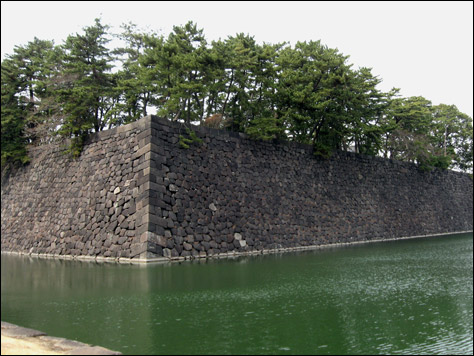 For over 550 years, this land has played an important part in Japanese government and military history. Around 1185, the transition from the Heian period

to the Kamakura period

warriors established a base in the area. In 1457, Ota Dokan

. After rising to power, Tokugawa Ieyasu

established a government and took the Edo Castle as his own. The Tokugawa shogunate 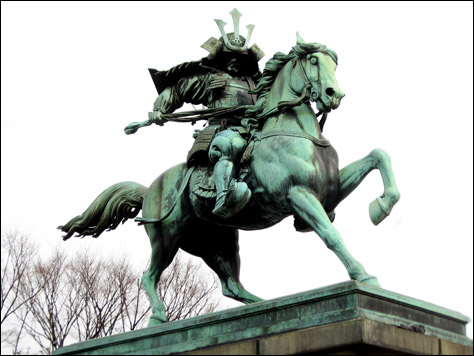 After an accidental fire destroyed the last remaining structures of Edo Castle in 1873, a new Imperial Palace Kyujo

was constructed for Emperor Meiji

. This facility was ultimately destroyed in World War II

. The eastern garden and park was established as Higashi-Gyoen

in 1986 and remains open to the public today. We did not make it over to Higashi-Gyoen, but we did visit the Sakuradamon Gate

and the Statue of Kusunoki Masashige

before descending into Hibiya·Yurakucho Station 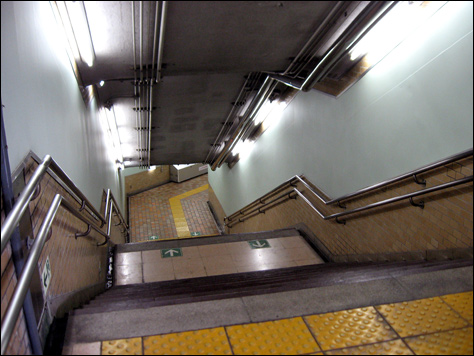 A short subway ride later, we passed the gate into the Tokyo Metropolitan Central Wholesale Market commonly known as the Tsukiji Fish Market

, the largest wholesale fish and seafood market in the world. The Tsukiji Market opened in 1935 after the former Nihonbashi

fish market was destroyed in the Great Kanto earthquake 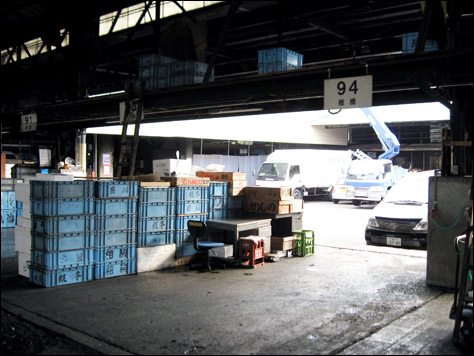 Since it was 1530 JST, the inner market was deserted and quiet. Our original plan was to visit during peak hours (0700–1000) but with limited time available and a daylong trip to the other side of the country scheduled for the next day, this venture was sacrificed. Although it was empty, you could get a feel for how it must be when busy. Building after building contained long rows with numbered stalls for the "middlemen" to display and sell the products not sold at the earlier auction (0530–0700). Even though there were no fish visible, the smell of piscine permeated the air. 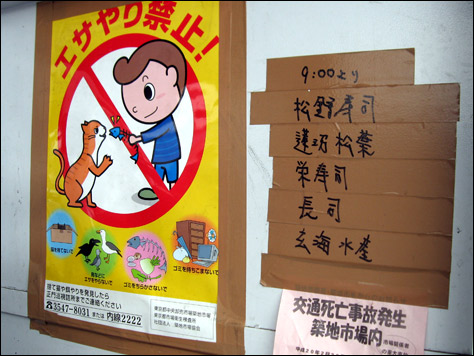 Moving into the outer market, it was still quiet but evidence of life was just an alley away. Most of the seafood and cooking/restaurant supply shops were closed due to the time, but many sushi restaurants were open and doing business. I was not yet hungry, so I did not eat at the restaurant with horse flesh on the menu or at the eatery a few doors down with a sushi conveyor belt. Passing more shops, numerous small shrines—which are scattered everywhere in Japan as far as I can tell—and a Tsukiji kitty cat, no doubt well fed given his or her home, we made our way past the Tsukiji Hongwanji Temple

where the Tokyo Metro Hibiya Line

would take us directly to our next destination, Ginza 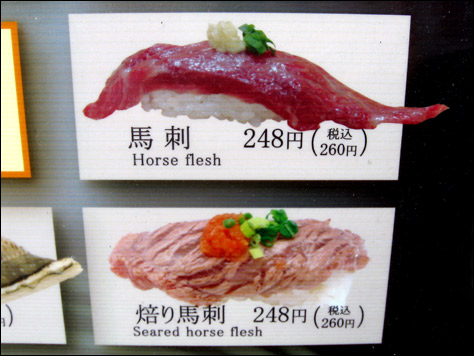 Located in the Chuo Ward

, Ginza is an upscale shopping district with many large department stores, restaurants and expensive Western boutiques. After exiting the train at Ginza Station

, we navigated the underground maze of tunnels, themselves an extensive shopping and dining area. Just as I was about to commit our route (in the wrong direction), Mom saw the sign for which we were looking. The lift doors opened and we walked out into the lobby of the Sony Building 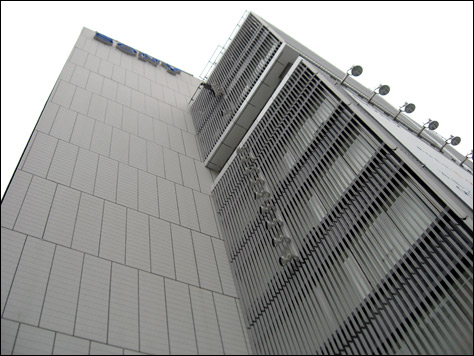 is filled with fully functional telephones, cameras, computers and other gadgets. Walking up and around the spiral showroom looking at the neat hardware, some of which is not available in the United States, I stopped to use a VAIO

notebook to e-mail friends at home. The operating system was Windows XP

but the language Japanese, so it is a good thing I know my way around a computer. It was all for not though as the Sony firewall blocked my access to webmail. Before exiting the Sony Building to explore Ginza, I noticed a sign indicating all Sony Showroom facilities are powered exclusively by wind energy. In fact, there was a certificate from the Green Power Certification Authority

attesting to the generation of 145,000 kWh at the Choshi Byoubugaura

Wind Power Station for use at the Ginza Sony Showroom. 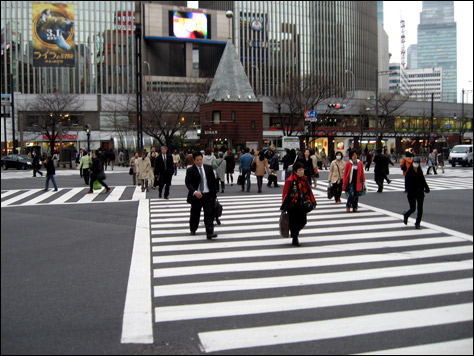 Upon leaving the Sony Building, the skyscrapers of Ginza tower overhead while the vast crosswalk grid of the Sukiyabashi Intersection

and more flash and glow from high above. There is a palatable energy in the air as scores of people move in and between buildings, cars whiz past but obey pedestrian road rules and trains rumble by on overhead tracks. The area is slightly reminiscent of New York City's 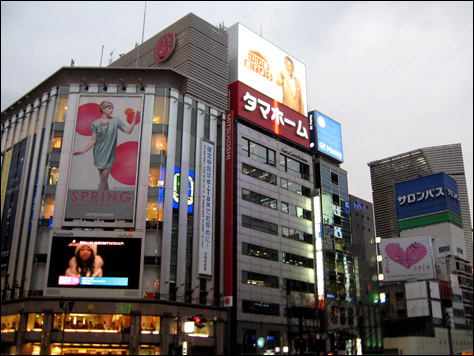 Although we were walking around, stopping as we pleased to look inside stores and taking a short break in a little park with fountains, we were in fact looking for the Mitsukoshi

department store. Mom had read about this and other Japanese department stores and wanted to look inside one. We eventually found Mitsukoshi and went inside. Floor after floor was filled with merchandise, lots of customers and attentive hosts and clerks standing by to assist. We made our way through the store to the food market levels, reportedly modeled after similar markets in Harrods

. Although I have been to Harrods, the experience also reminded me of visting The Broadway Market

in the 1980s. By now, it was around 1800 JST and I was ready to eat. We proceeded to the basement, where restaurants are known to be located in Japanese department stores. After inspecting the plastic food models in the window display, we entered the Shiki San Sai

restaurant for dinner. Mom had eaten earlier so she had a drink and dessert—one of the best tasting vanilla ice creams she has tasted—and I ordered cold Sake

and the Nigiri Sushi (Hana)

platter. Like many other locals we interacted with, the waiter knew some English and was pleased to use it with us. The food and drink were delicious, but I particularly enjoyed the wasabi

that seemed much hotter than any I have had before. 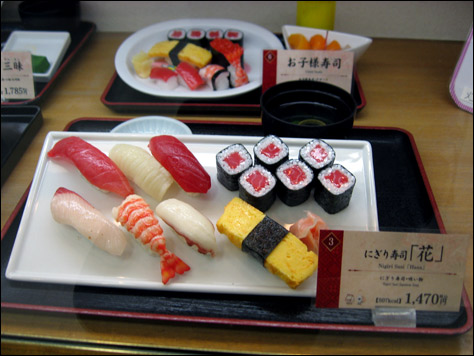 After dinner, it was time to head back to the apartment. I grabbed a few last pictures on the train platform, bringing the day's count to 262. We needed to get to sleep despite the early time of 1900, for the next day's journey would require getting up and leaving by 0400 in order to make all the necessary train connections. The destination is Hiroshima

, 796 kilometres (495 miles) from Shin-Yokohama Station via the Hikari Shinkansen. Usually getting to sleep this early would pose a problem for me, but the miles of walking are exhausting and I am not in spectacular shape. I quickly drift off—even the characters in my dreams speak Japanese—anxious for the big cross-country trip west.