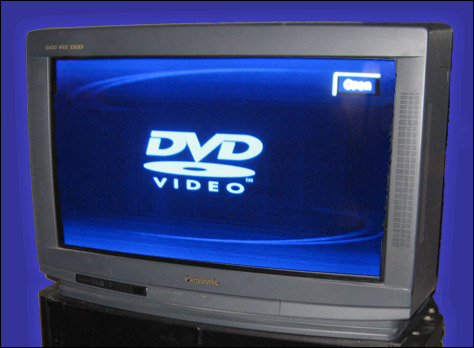 Thanks to my friend Keith, I now have a Panasonic TC-28WG25H GAOO Wide DDD 26-inch widescreen CRT television to replace the 19-inch set Chris gave me, which over time developed a green hue, horizontal lines and occasional flickering. Actually Omar's old TV, the Panasonic was made in Osaka, purchased in Pakistan Dubai and later moved to Tallahassee. It may not be new, but it is modern, well-traveled and the picture looks great. The native 16:9 aspect ratio means that movies and television shows filmed in 1.85 nicely fill the entire screen without stretching or black bars. Movies filmed in larger formats like 2.39 (anamorphic widescreen) still look great, but with horizontal black bars. Interestingly enough, I found the picture of standard television looks good stretched to 16:9 from 4:3, although I have only been able to test this with my That '70s Show DVDs. Equipped with a Belling-Lee connector instead of the US standard F connector, I will have to use RCA if I ever get cable or an antenna. Otherwise, it is loaded with numerous S-Video and RCA connections perfect for my needs. All I have left to do now is rearrange my living room setup to accommodate it. Currently sitting on its stand, neither entertainment center I have can support the width, which has to be the best problem ever to have with a television.
Photo Credit: David July
"The New Television" https://mtsutro.org?p=914