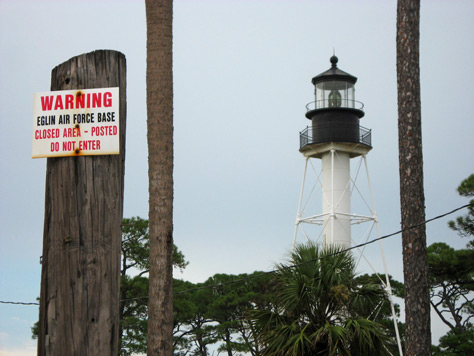 One of the places Mom specifically wanted to visit during our August 2010 photo road trip was the lighthouse at Cape San Blas. Funded in 1883 and lit in 1885, this lighthouse is the fourth to be built in the area. It was relocated in 1918 and subsequently reactivated in January 1919. The original Cape San Blas Light was completed in April 1848 only to be destroyed in an August 1851 storm. A replacement was built and became operational in November 1855, but it too was destroyed by a hurricane in August 1856. The third lighthouse built was lit in May 1858. It was stripped of its lens and severely damaged during the American Civil War, but was repaired and returned to service in July 1865. Ultimately, beach erosion caused it to topple into the Gulf of Mexico in July 1882. After browsing the Sleeping Beauty Gift Shop and historical items in the restored keeper's house, we paid $5 each to ascend the lighthouse. It was a mostly overcast day but the climb and views were still quite nice. We spent some time on the adjacent beach, discovering several marked sea turtle nests in the process, before driving to Panama City Beach for dinner at Sharky's Beachfront Restaurant and Tiki Bar. The drive back to Tallahassee via SR 75 and SR 20 was uneventful, save for a double rainbow sighting and an unexpected sunset—the sky cleared shortly after we gave up on seeing the sunset and departed Sharky's for home. I really enjoyed Mom's visit and our two-day trip around the panhandle. Photograph sets for each segment are available: Carrabelle, Apalachicola, Cape San Blas, Panama City Beach and St. Marks National Wildlife Refuge. Our next destination is Topsail Hill Preserve State Park not far from Seaside. The park features 3.2 miles of secluded and undeveloped beach, 25+ foot tall dunes, three rare coastal dune lakes and several hiking trails. It sounds quite different from the other state parks I have visited and should be an interesting location to celebrate Thanksgiving.