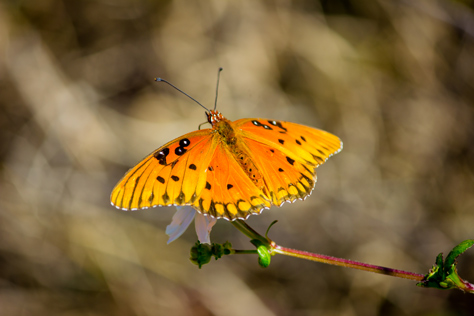 A Gulf Fritillary or Passion Butterfly (Agraulis vanillae) feeding on a flower's nectar next to the lake at Jacksonville's Kathryn Abbey Hanna Park.

I may host a few events over the course of a year, but I have come to always host an annual New Year's Eve party here in Tallahassee. Like the six or so before it, tonight's celebration was a fun success.

Some of these parties have been quite busy all night, while others had different groups of people coming and going throughout. Tonight's gathering was more like the latter, which is just as well considering I bill my private event as the most laid back celebration in town.

Although several friends had other plans that required them to depart prior to midnight, I am pleased that I was able to see most of my local friends and serve them Newcastle and Smithwick's.

Several of my guests remarked that they were glad to be ushering in 2013 because 2012 was not a spectacular year for them. Fortunately, this was not the case for me.

First and foremost, a goal to advance my career finally came to fruition when I was promoted to the Florida Department of Transportation's Emergency Management office where I am in charge of all plans, information and technology during regular and emergency operations.

This substantial but rather logical shift in gears has already provided me with various new opportunities to learn, grow and make a difference. I may not see things from the boots on the ground perspective, but it is no less fulfilling to be able to do work that directly and indirectly informs and assists both those in need and those responding during states of emergency.

Business trips to Fort Lauderdale and Orlando were both fun and educational, lest I mention my tour of the National Hurricane Center. But I obviously took the most away from the various activations during the Atlantic hurricane season and my ongoing role as one of the department's on-call duty officers.

I am also fortunate to have been able to take several camping trips with Mom and Ross, continuing our informal mission to visit and/or camp at every Florida state park.

We also tried out a local park and had our family Thanksgiving at the City of Jacksonville's Kathryn Abbey Hanna Park just south of Naval Station Mayport on the Atlantic coast.

The year also brought several technological upgrades. I continue to be very pleased with the performance of my Canon EOS 550D/Rebel T2i and lenses, seeing the ever-growing backlog of RAW photographs to be processed as a sign of success.

While I maintain that great pictures need not necessarily require great equipment, I can see my work improving and am sure the camera and lenses are at least in part to thank.

More recently for Christmas (and my upcoming birthday), Mom and Ross got me a modern television set and accompanying Sony BDP-BX18 Blu-ray player. The Toshiba 40L5200U has a beautiful picture and renders images at 120 Hz with LCD backlighting. My outgoing Panasonic TC-28WG25H 16:9 widescreen CRT is nice but nothing can compare to today's technology.

While I await a few new Blu-ray discs from Amazon, I am loving every minute of the first two remastered seasons of Star Trek: The Next Generation. As I tell everyone lately who will listen, I find it absolutely incredible that I am able to see exquisite detailing in episodes I have seen literally hundreds of times.

Holodeck episodes like "The Big Goodbye", "Elementary, Dear Data" and "Manhunt" are particularly fetching to me, with period sets and costumes with details the art department should be pleased to see are finally visible.

In short, I am moving into this year filled with excitement over what is yet to come. Best wishes in the new year!