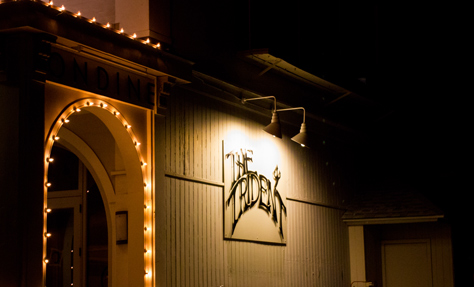 Exterior sign for The Trident illuminated on the side of the building near decorative lighting.

As mentioned previously, my birthday in the bay area was planned to be a relaxing and fun day of nature, trails and photography.

We got an early start on Tuesday, 29 January and began at Muir Woods National Park. After lunch, we continued to Mount Tamalpais State Park and enjoyed amazing views of the entire region from the East Peak at 2,571 feet.

The next destination was dinner and we were ready for it. I had set out to pick the perfect location on 30 December 2012 so that I could make a reservation a month in advance, not to mention cross this off on the trip preparation checklist.

View the entire The Trident album in the Gallery

There were a few characteristics that I was looking for in potential restaurants, which I thought might make this difficult. First, since we were spending the day in Marin County, it seemed only logical to dine in Sausalito. With that in mind, I focused on places along the waterfront featuring scenic views.

We were going to be outside all day, walking through the woods, hiking trails and other non-suit situations. I did not fancy the idea of bringing a change of clothes; plus, who wants to suit up after a day of hiking without a shower? That was when I found and read more about The Trident at 558 Bridgeway. 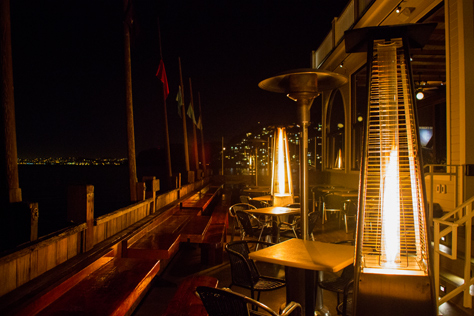 Located in the original San Francisco Yacht Club building (1898), The Trident has a rich history from its beginnings as a jazz club called Yacht Dock in 1960. Later in 1966 as the hippie movement took over, Yacht Dock was renamed The Trident and underwent a "major groovification." Notable patrons of the time included regular Janis Joplin, Jerry Garcia, Joan Baez, Clint Eastwood and Bill Cosby.

Despite closing in 1980 and being replaced by Horizons restaurant, The Trident was given new life and reopened in November 2012. The building was renovated to include a second-level deck but "most of the custom built wooden interior and the 1960s ceiling mural painted by artist David Richards" remain intact. A menu from the still groovy early 1970s now hangs framed in the hallway as you enter the restaurant. 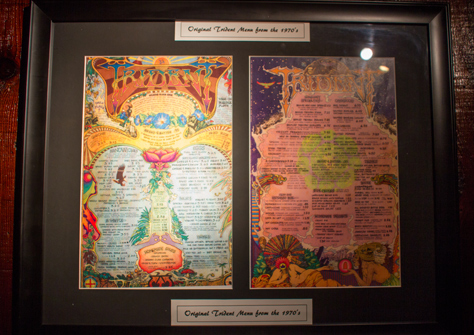 My strict criteria notwithstanding, I was able to find the perfect location in The Trident. Their menu is one of an upper-end restaurant with prices and service quality to match, but have a casual dress code. The tables along the windows, including our Table 82, have seats on one side only. It was a little chilly this night, but next time I will sit outside on the bay-facing deck.

We arrived early but were seated immediately and quickly tended to by a nice waiter. We started with Fried Calamari served with cocktail and tartar sauce ($14) and glasses of 2010 Highway 12 Cabernet Sauvignon ($11). Delicious loaves of bread with butter were also delivered and replenished several times. 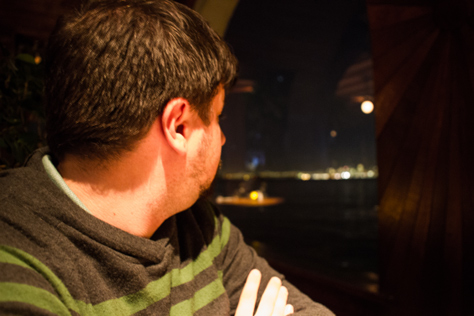 For dinner, Marc ordered the Golden Gate All Natural Burger ($14) with mushrooms ($2) while I went with the Mahi-Mahi catch of the day special served with potatoes and vegetables ($29). Everything was delicious. The waiter even commented on our extremely clean plates afterward.

I usually end birthday dinners with a cocktail such as whiskey on the rocks, but instead went with a Yacht Club Stella Artois ($7.75) since I was driving. When making the reservation via OpenTable, I noted that this was to be my birthday celebration. As such, we were surprised with a Flourless Lava Cake dessert served with fresh fruits and vanilla ice cream ($8) on the house. 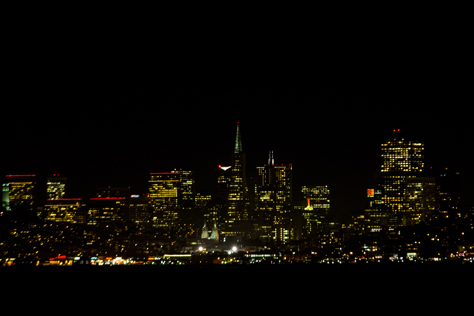 After settling up and but before heading to our final stops in the Marin Headlands, we went to the deck to enjoy the view outside and shoot photos.

The evening at The Trident was perfect and at about $100 for two before gratuity, perfectly reasonable considering how much food we had consumed. I will definitely return some time, preferably before sunset on a warm clear day. 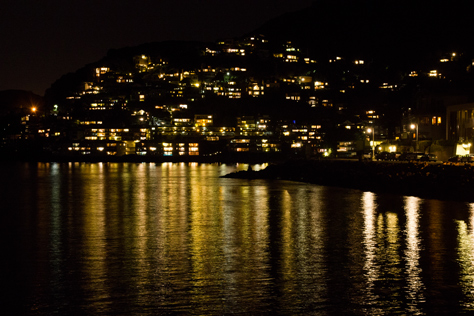 Illuminated homes on South Street, Edwards Avenue and Hi Vista Road just south of The Trident reflecting in the bay. 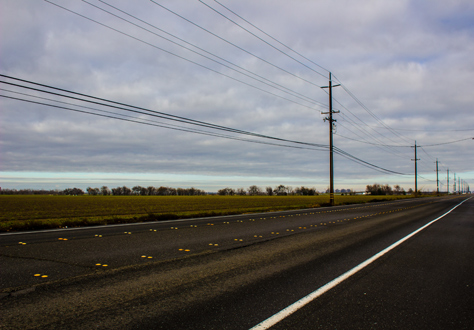 Looking north on the aptly named Pole Line Road as the skies over Davis begin to clear. 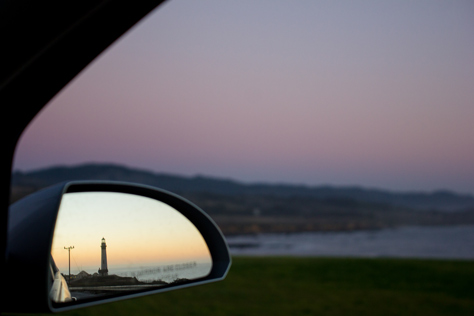 Pigeon Point Lighthouse (1872) and dusk over the Pacific Ocean reflected in the passenger side mirror with grass and the rocky shore beyond. 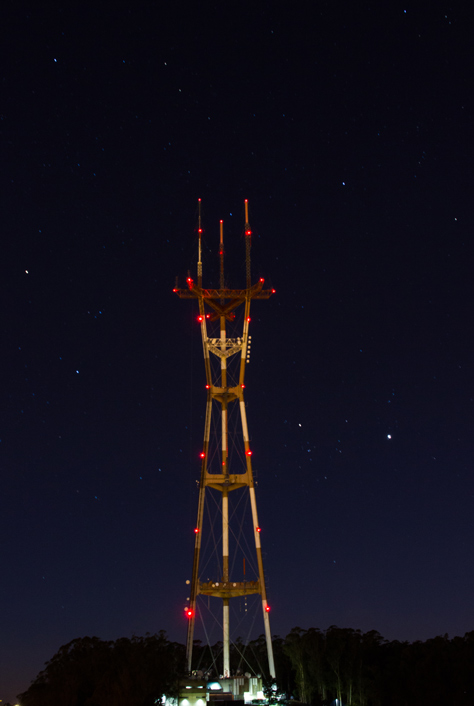 Thirty-second exposure from Twin Peaks of Sutro Tower (1972), Jupiter and the stars.