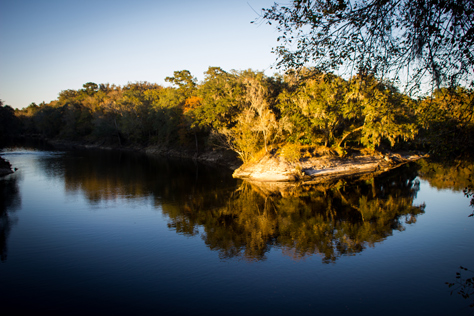 The Suwannee and Withlacoochee River confluence from a lookout in Suwannee River State Park.

Acquired by the state in 1936, Suwannee River State Park in northwest Suwannee County first opened to visitors in 1951. Originally the site of Columbus, a small town established in 1841, the park's main attraction is the eponymous river and its confluence with the Withlacoochee. 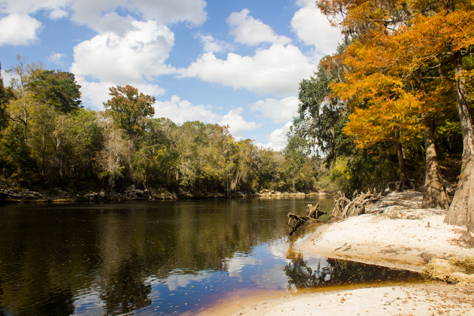 Winding for about 266 miles from the Okefenokee Swamp in southern Georgia to the Gulf of Mexico at Suwannee in Dixie County, the Suwannee River is a federally designated wild blackwater river featuring fifty-five springs along its path. Once frequented by steamboats in the eighteenth and nineteenth centuries, the Suwannee River today is a tranquil and mostly unspoiled naturalistic setting. 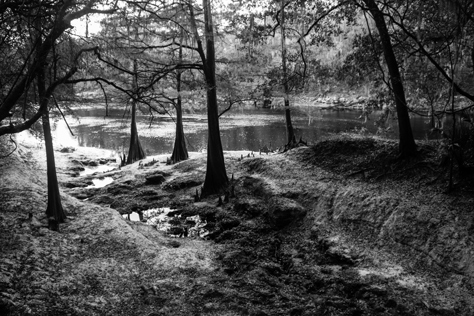 Its flow demarcating a majority of Suwannee County's border, the river separates Suwannee from Hamilton and Madison County in the area of Suwannee River State Park. There are numerous opportunities within the park to see and access the river, including favorites like the boat ramp, Suwannee River Trail, Balanced Rock Trail and an area near the Confederate-built earthworks of 1863. 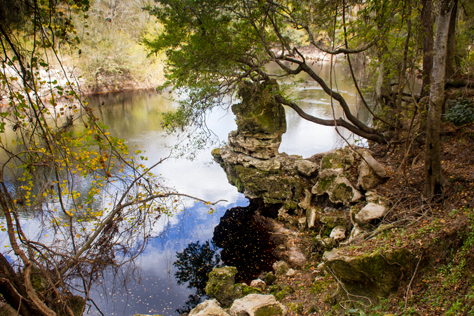 Nearby, the pedestrian-only Old Hillman Bridge (1926) to Ellaville (1860–1942) that once carried U.S. Route 90 across the river also has great points of view. Running parallel just a bit upstream, a railroad bridge carries what was part of the former Seaboard Air Line Railroad across the river at CSX Milepost SP 728.2. 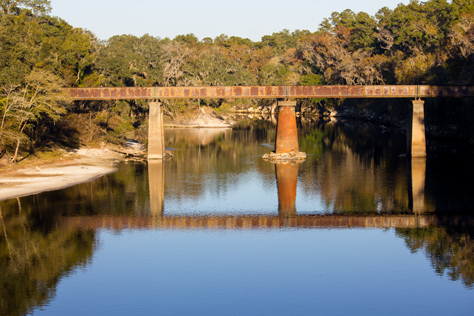 Appropriate for the rural setting, the park's campground only has thirty sites situated a short walk from the boat ramp. We have been twice so far and enjoyed each visit, finding the trails and surrounding ghost towns fun to experience and photograph.

The most unusual thing at Suwannee River State Park is the fifty-foot right of way clear-cut through the forest for the South Georgia Natural Gas underground pipeline (1991). It runs next to the campground, is crossed by trails in several places and can be quite surprising to discover along a wooded trail. 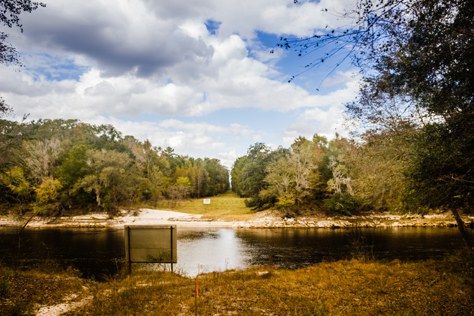 A contentious matter to locals and environmentalists in the late 1980s, the pipe would be invisible if not for the abrupt clearings. The ecological impacts such as the destruction of red-cockaded woodpecker (Picoides borealis) habitat were originally dismissed, although the state later fined the gas company over $100,000 for damages caused, nearly 100 water quality standards violations and uncontrolled stream sedimentation.