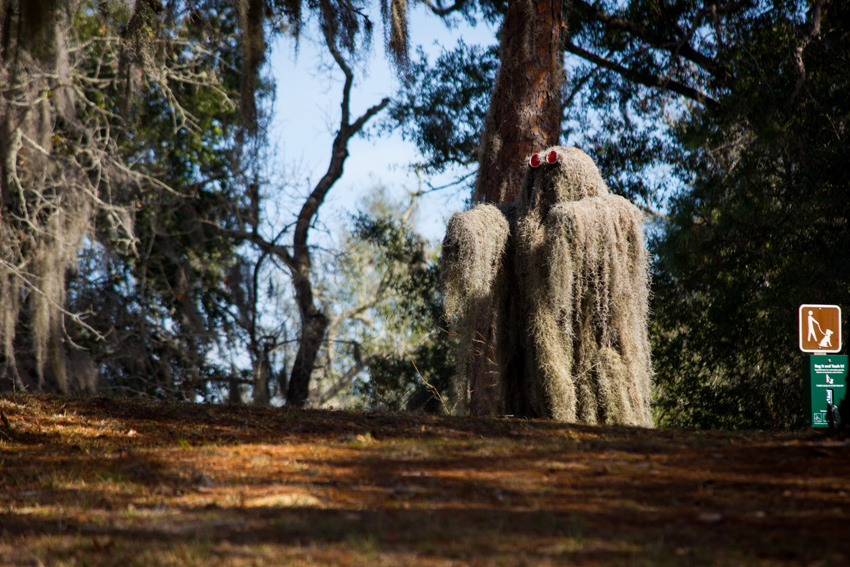 While enjoying a family camping trip at Mike Roess Gold Head Branch State Park in Keystone Heights, I found myself face to face with a true Florida legend… the Moss Man. A large mythical creature with red, glowing eyes and a penchant for violence, Moss Man has been striking fear into children around campfires for decades.

During my encounter, Moss Man was stalking, er, greeting visitors entering the park's day use area. He is known to wander the park however and has made appearances in other locations over the years. I did not speak to any park rangers, but when asked they apparently share a friendlier version of the Moss Man tale wherein he protects our state parks.

So what is this beast of legend made of Spanish moss and why is it roaming the forests and swamps of Florida? As with any folk tale of this type, there are numerous origin stories and localized versions told. Moss Man urban legends of one kind or another likely exist throughout the southeastern states where Spanish moss grows. 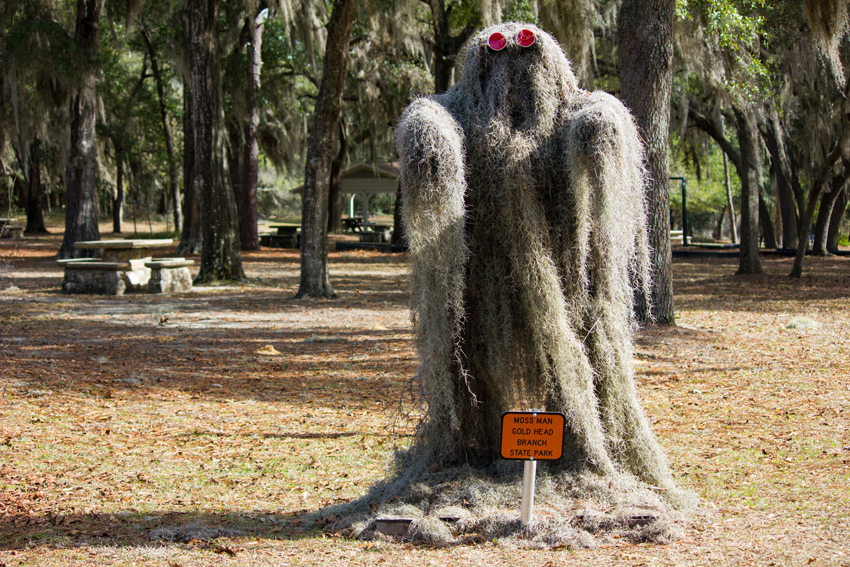 In the case of Florida's Moss Man, journalist Cinnamon Bair has documented several origin stories including one told to her firsthand while camping in the Withlacoochee State Forest as a youth in the 1980s.

That story introduces us to "an Air Force fighter pilot stationed at MacDill Air Force Base in Tampa." While flying training maneuvers in the area, the plane crashed into the forest with the pilot aboard. Although he was able to escape in one piece, his flight suit was alight and melting into his skin. Dropping to the forest floor and rolling about in agony, Spanish moss was infused into his searing flesh. In a craze from the experience, the pilot's eyes turned glowing red with rage and he left his former life behind to live in the forest and stalk wayward campers.

Another tale describes the Moss Man as a murderer who had escaped from a local prison. Injured by dogs and barbed wire during his escape, the prisoner eluded his captors in the forest where "he collapsed into a heap of moss and slept for several days without waking." Upon finally waking up, the man discovered that "the moss had taken root in his many injuries" and so off he went, continuing his violent rages as a creature of the woods.

The final version that Bair recounts is the story of a hiker who fell into an abandoned war era foxhole and broke his leg. Somehow able to survive alone, the hiker endured intolerable hardships while still hoping that someone would finally come to his aid. By the time his injuries healed on their own, moss had grown over his body. He finally left the foxhole in a rage and "stalks the woods to this day, seeking out revenge against all campers since no one came to help him."

There are, of course, additional tales such as the Moss Man of Red Reef Park in Boca Raton and the Moss Man of Mississippi. Regardless of the rationalization or adaptation, the common thread of a moss-covered and rage-filled entity is generally found. As new generations of campers and scouts experience campfire storytelling, the myth of the Moss Man — and those of his brethren the skunk ape, crackleback rattlegators, swampbillies and spectral pirates[1] — will live on in local culture. 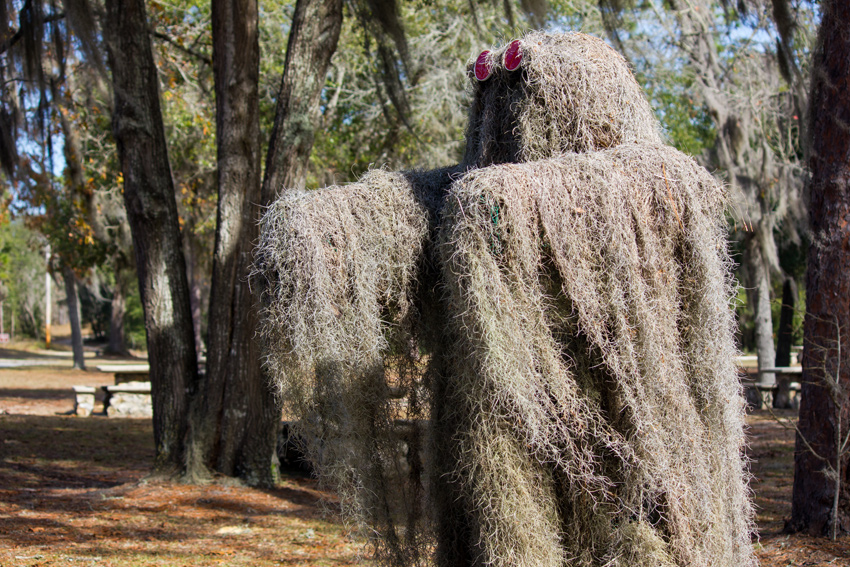 Beyond the Moss Man of myth and legend, there are numerous other examples of people and things identified by that appellation. Paul T. Selle (1908–1996), owner of Vego-Hair Manufacturing Company of Gainesville, Florida was known as the Moss Man. From the 1930s to 1965, Selle earned his nickname by offering what was at the time "a valuable commodity used as stuffing for fine furniture, automobile seats and bedding."[2]

There is also Ken Russell of Batesville, Mississippi whose company Mostly Mosses "uses wild mosses to cover containers and baskets for floral arrangements" and "wholesales many moss covered items to florists all over the country." Russell, who calls himself the Moss Man, says that he has "an innate feeling about where [moss] will be" and that his "mother says [he] can smell it" when scouting in wooded areas. Russell sees moss as more than just decoration in his topiaries, wreaths and other creations. "Your mood changes positively when you see it," he said.[3]

Two additional examples are also worthy of note. Wide receiver Santana Moss, who caught the attention of the National Football League while at the University of Miami and went on to play for the New York Jets and Washington Redskins, has a "Moss Man" tattoo on his left biceps. It is apparently "anything but showy," appropriate given Moss' soft-spoken voice and relatively short stature.[4]

Finally, comedian Dave Berry reminds us that in the 1980s, Moss Man was a toy from the popular He-Man series of action figures. "And we have to explain that no, you can't put Moss Man in the water, because his moss will come off," he wrote in 1985. "And then we have to discuss how we know this, how we would presume to know more about Moss Man than a four-year-old child, and anyway what would be so awful about having Moss Man lose his moss?"[5] 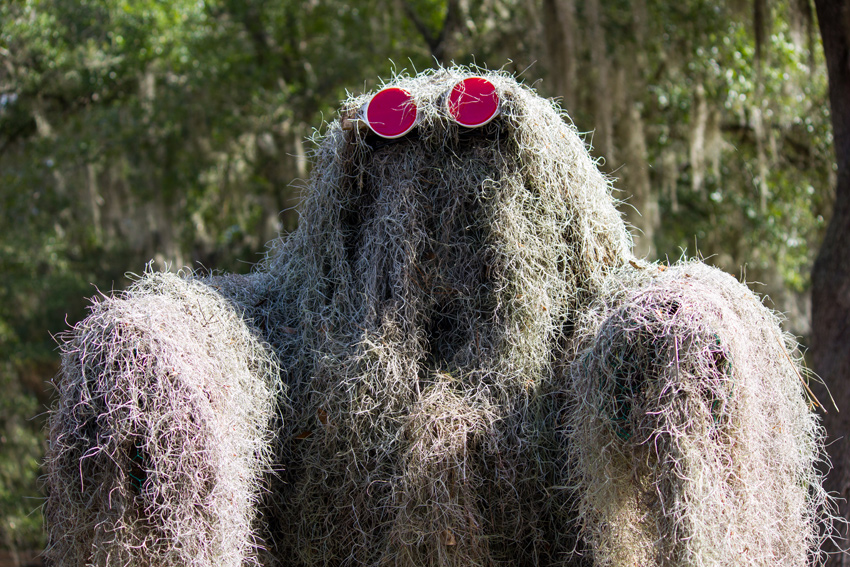