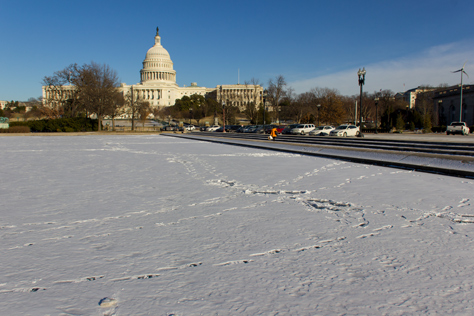 Footprints in the snow show where people walked over the completely frozen Capitol Reflecting Pool (1971) near the United States Capitol (1811/1866) and United States Botanic Garden (1867).

part of the National Mall album 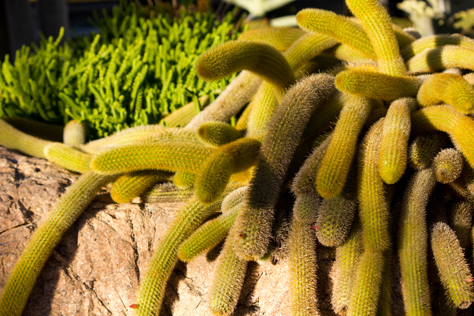 Golden rat tail cactus (Cleistocactus winteri) in the world deserts environment within the Conservatory at the United States Botanic Garden (1867).

Of all the diverse botanical species on exhibit at the United States Botanic Garden Conservatory, I found these Cleistocactus winteri native to Bolivia to be one of the most unusual and visually interesting.

A member of the Cactaceae (cactus) family, Cleistocactus winteri is classified as endangered by the International Union for Conservation of Nature. 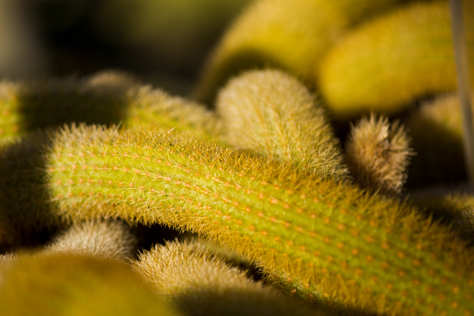 Cleistocactus winteri is only known to exist in two locations — a combined area of 96.53 square miles — within the Province of Florida. They occur on forest cliffs in seasonally dry inter-Andean valleys at elevations around 4,400 feet.

The northern subspecies is only found on a single cliff, while the southern subspecies occurs over a six mile or so stretch of cliffs. The latter is also subject to frequent collection by locals who in turn use them as ornamental plants. 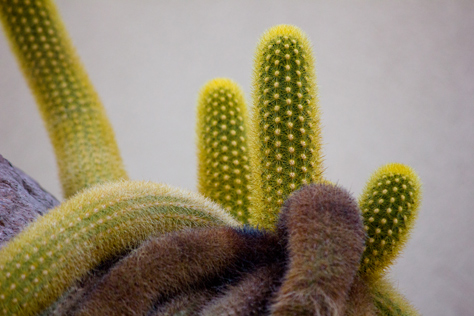 There is no shortage of interesting and free things to do in the District, but I definitely recommend visiting the United States Botanic Garden. Open daily from 1000 to 1700, the various themed areas like the world deserts environment can provide a nice change of pace… especially during a wintertime trip. 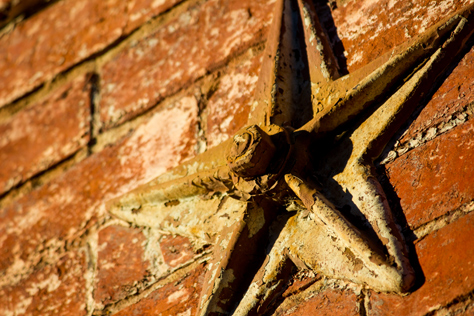 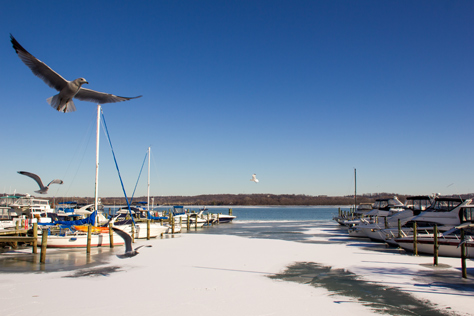 Ring-billed Gulls (Larus delawarensis) flying over the frozen Potomac River in the Torpedo South Pier along the Torpedo Factory (1918) Wharf at the City of Alexandria Marina. 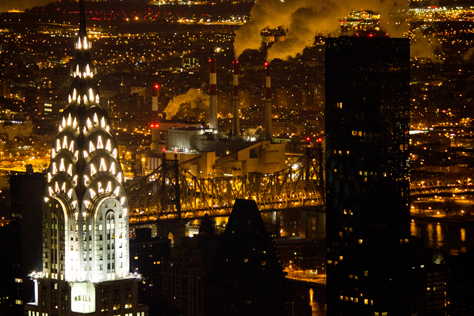 The majestic art deco Chrysler Building (1930) and nondescript Trump World Tower (2001) with the Queensboro Bridge (1909) and Ravenswood Generating Station (1963) beyond from the 86F observation deck of the Empire State Building (1931).

I have been to the 86F observation deck of the Empire State Building (1931) at least twice before, but never with a camera nor late at night. Since they stay open until 0200 regardless of the weather, I decided that I would go after 2300 on my first day in town to avoid any crowds. 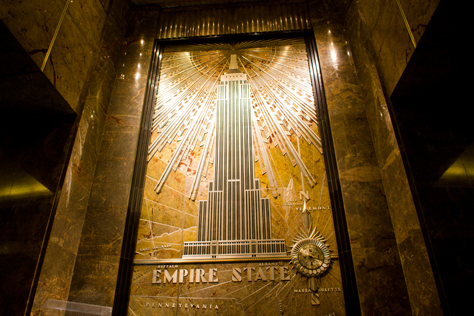 It was fifteen degrees when I arrived at the lobby around 2330 on Thursday, 23 January 2014; crowds were not going to be a problem. The lobby was thoroughly renovated to recapture design features lost in the 1960s, return the illumination to original levels, restore the marble walls and completely replicate the art deco ceiling mural first installed in 1931. 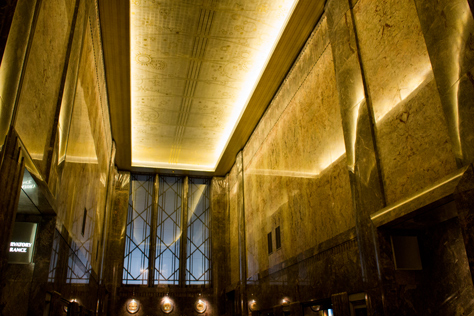 As expected, I did not have to wait for one second during my visit. I purchased a ticket ($27), passed through the airport-style security checkpoint and rode a lift from 2F to 80F. The new visitors center exhibit on 80F opened in 2011, the building's 80th anniversary year. 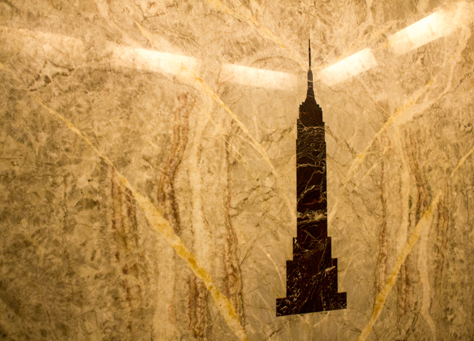 Information panels provide historical records, statistics and photographs focusing on three main themes: speed, scale and steel. Although modern, the design of the floor and exhibits matches the overall style of the building. 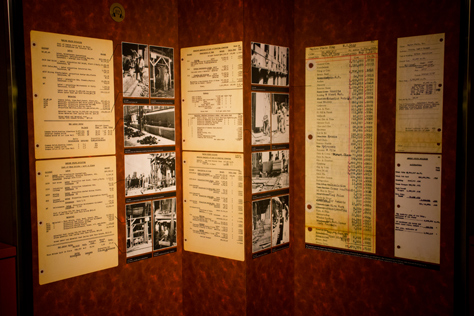 Visitors normally have plenty of time to read all of the information, but I spent only a few minutes since there was no wait, I had been up for over seventeen hours and was keen to get to the observatory. Proceeding to the bank of elevators, I rode from 80F up to the main observatory deck on 86F. 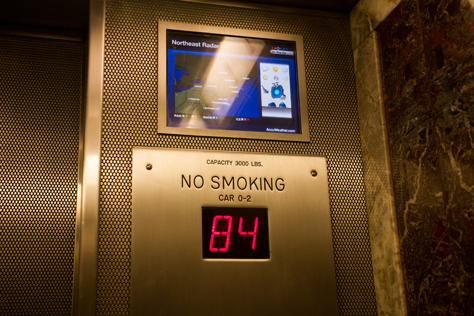 A sign and backlit photograph welcomes arrivals to 86F, which includes the famous open air 360 degree terrace and an indoor viewing gallery with radiator-lined windows. I immediately went outside and discovered what fifteen degrees feels like with 15–20 mile per hour winds at 1,050 feet. 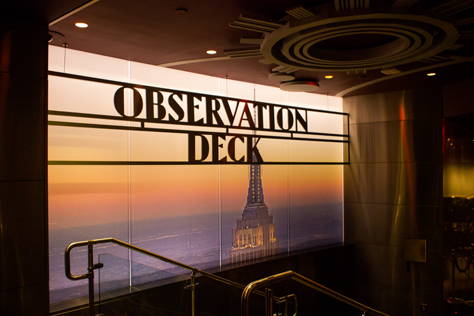 Yes, it was damn cold but very much worth it. The weather did make for a fairly picturesque evening, the glow and shimmer of skyscrapers and street lamps providing most of the illumination. Despite all of the light, the city felt unusually still and rooftop bars within view were doing no or very little business. 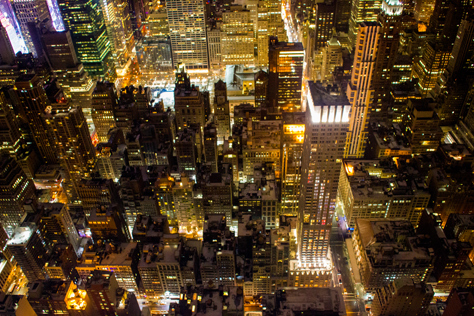 For the next two hours I repeatedly circled the observation deck taking photographs, stepping inside a few times to warm up over the radiators along the windows. Views to the south include the Flatiron Building (1902), New York Life Building (1928), Metropolitan Life Insurance Company Tower (1909) and the nearly complete One World Trade Center (2014). 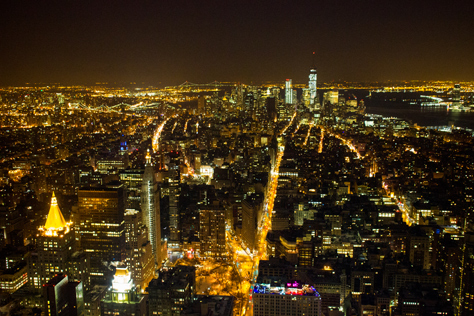 To the east is the United Nations Headquarters (1952) building, directly across the East River from the neon Pepsi-Cola sign (1938) at Gantry Plaza State Park. The sign was refurbished in 1994 and subsequently moved after the nearby Pepsi bottling plant it adorned closed in 1999. It was installed at its current waterfront location in the park in 2008. 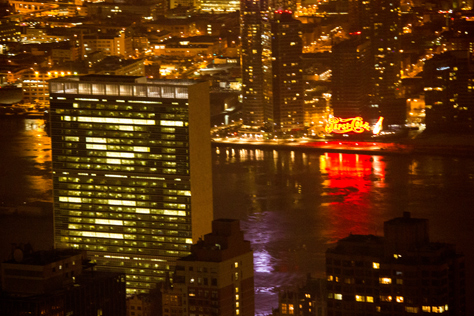 Toward the tourist trap known as Times Square, more modern skyscrapers like 1095 Avenue of the Americas (1974), the Condé Nast Building (1999) and One Astor Plaza (1972) stand alongside older structures that fortunately remain. 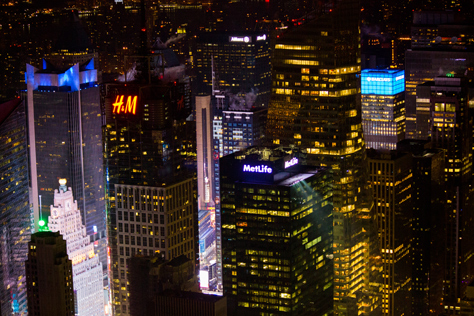 Although the wind and cold made it difficult, I tried to use the terrace ledge and various poses to steady my camera. Keeping still while shooting at 250 mm was a particular challenge, especially with the light conditions. Many turned out blurry but others are salvageable, like this closeup of the Flatiron Building and the snowy intersection in front of it. 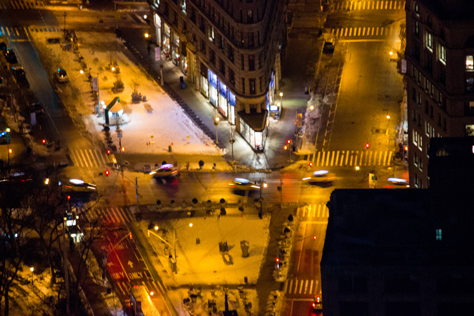 A notable feature of the Empire State Building is its 158 foot mooring mast — originally designed as a docking port for transatlantic airships — and the 204 foot antenna spire atop. 102F houses an indoor public observation deck that costs $17 more to visit and the now off limits 103F has a docking port, outdoor terrace and hatch to the antenna. The first transmissions from ESB occurred before New Year's 1932. 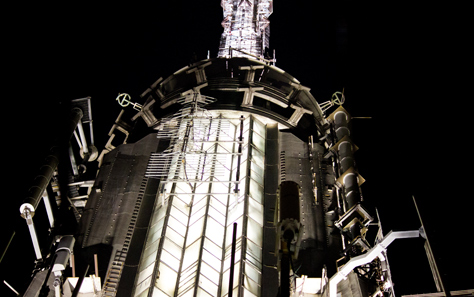 Bearing FCC Antenna Structure Registration (ASR) 1007048, the antenna spire has an overall height of 1,504.3 feet above mean sea level. After the destruction of 1 World Trade Center in 2001, a majority of commercial television and FM radio stations moved to the Empire State Building. Several antenna arrays are mounted to the mooring mast below 102F, while transmitter rooms are located on 79F, 81F, 82F and 83F. 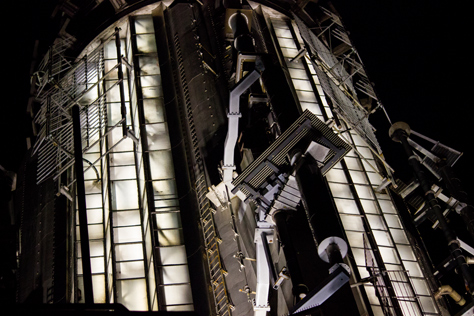 All external lighting hardware was upgraded in November 2012, replaced with a new dynamic LED system designed by Philips Color Kinetics. The mooring mast's chrome-nickel steel and backlit faceted glass is illuminated by this system and can appear in a variety of colors. 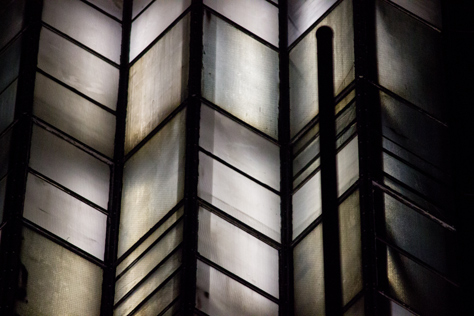 The temperature would drop to fourteen before I decided at 0130 that it was time to retreat to the warmth of my room at Hotel 31, located about five blocks away at 120 East 31st Street at Lexington. 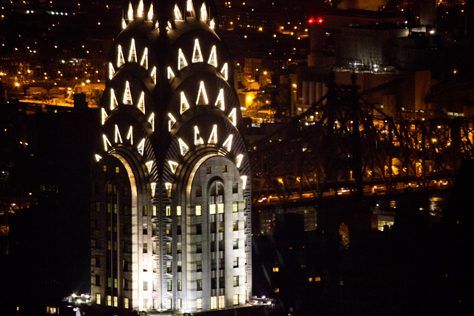 The images developed thus far only represent a small percentage of the 266 total shots taken, so others will likely be added to the Empire State Building album in the future.