Despite having just returned late tonight from a weeklong trip to Fort Lauderdale, I will be getting back in the car shortly and heading to Tallahassee (again, but not for pleasure). I will return to Orlando on Wednesday, 27 July 2005.

I apologize for the personal distance and lack of activity here at Mount Sutro. Oh, and a quick "hello" to those of you who have visited for the first time recently and left a comment or sent me an e-mail. I hope to devote some time to things around here soon, but I cannot make any guarantees right now.
6 Comments https://mtsutro.org?p=337
I will be in Fort Lauderdale from Sunday, 17 July 2005 to Sunday, 24 July 2005. I am unsure how often I will be able to check e-mail so any important communiqués should be directed to my mobile.

Have a nice week!
4 Comments https://mtsutro.org?p=336
Parrish Park in Titusville turned out to be a fantastic spot to watch the Space Shuttle Discovery launch NASA's return to space, the first such mission since the Columbia accident. And despite the fact a sensor in the main external fuel tank failed, necessitating the scrubbing of the launch, the trip to the coast was not in vain.

After driving around Titusville, Merritt Island, Cocoa Beach and down to Melbourne and back, Chris and I decided that we would board the Ambassador II and give the Sterling Casino ship a try. It ended up being great fun! While our bets were limited to the slots, Blackjack, Craps, Roulette and Poker were also available. The free buffet was nothing extravagant, but complemented the free alcoholic beverages well. Not to mention that I am sucker for a nice boat ride.
2 Comments https://mtsutro.org?p=335
CNN just reported that Tallahassee will be the recipient of strong thunderstorms from Hurricane Dennis' feeder bands in a few minutes. Having left there yesterday at around seven in the evening, Erik and I expected to encounter some inclement weather during our trek back to Orlando.

Interestingly enough, the entire ride down Interstate-10 eastbound and on Interstate-75 southbound to Gainesville was uneventful. The sky was ominously brewing as we made our way out of the city, but would not experience a single drop of rain until after leaving Gainesville at 0200. Somewhere north of Sumter County we encountered very high wind gusts and heavy rain that made driving over 45 impossible. But even that experience lasted for only ten or fifteen minutes.

For the balance of the four hour drive, the rain was intermittent and never particularly strong, however the wind continued to maintain its status as an adversary on the road. Overall, we managed to avoid any severe weather and did not feel unsafe traveling. We did see around 100 military vehicles transporting troops, generators and other supplies in addition to State Police and a convoy of Asplundh company vehicles, all traveling toward where Dennis is slated to make landfall shortly. 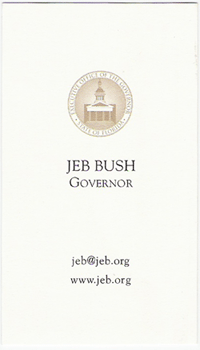 In other news, the trip itself was a complete blast. It was fun hanging out with Claire and Ash in their newly-purchased home and the party was quite enjoyable as well. In addition to general running around town, I finally did something I have been meaning to do for years: a tour of both the old original Capitol building and the current headquarters.

We first toured the old Capitol building, standing on its present location since 1845. The second floor rooms have been converted into sectional areas, each describing relevant periods in Florida history — such as segregation and the 2000 Presidential election debacle — and a thorough chronicle of the State's government. Of particular interest to me was the restoration and partial recreation of the original State Supreme Court chamber, which served the Court from 1845 to 1912.

Next we walked across the small courtyard to the current Capitol building, a twenty-two floor executive office building completed in 1977. While I had been looking forward to viewing the floors of the State Senate and House of Representatives, the 360 degree panoramic view of Tallahassee from the top floor of the building was an unexpected treat. Also, visiting Governor Jeb Bush's office lobby contained some interesting items, like a first-press set of the Florida quarters presented to Bush from the United States Mint. I asked the secretary working there for one of his business cards as you can see above and we all signed his official guest book.

It was a great trip and I hope I will have the opportunity to go back and hang out again before Claire and Ash's October wedding.

6 Comments https://mtsutro.org?p=334
I hope everyone had a great holiday weekend. I know I certainly did.