While there has never been a shortage of wildlife around my house, it seems that the population is steadily growing. There is not a whole lot of new development in this area; otherwise an influx of animal life would be expected. Regardless, as I am pro-environment and subsequently enjoy animals the new visitors are welcome.

Except in the middle of the night. I am by no means a light sleeper, but over the past several weeks I have been risen in the wee hours of the morning by the sounds of animals getting into brawls. Mind you, this is not like a dog barking six houses away. The animals are carrying on right outside my window. With Florida's weather such as it is, my window remains open until it is unbearably hot outside and on occasion a bit nippy. A lover of fresh, breezy air, I have my bed positioned right next to the window. Normally this presents a most idyllic sleeping environment, except of course when the animal kingdom gets a bit rowdy.

The creature count is currently as follows:


Sometimes the various animal cliques meet up and have words, but during this past week I have managed to wake up to the sound of eating, chatter and foraging. I even recently put a small lamp on the windowsill facing out so I can better see these little encounters whilst making little noise or motion. May as well get to see something if I am up, right?

Tonight while writing two PHP scripts to power new Mount Sutro features I heard the familiar crunch and shuffle of little feet pattering though the leaf-covered passage of my side yard. I quickly turned off my desk lamp and crawled onto my bed, flipping the switch to my animal kingdom lantern. It was the mother raccoon and her four adorable babies. I am not a big fan of human children, but little animals have the power to turn me into a bawling little schoolgirl.

These must be the same raccoons that have been getting into my garage to eat garbage, I figured. And since I recently started kicking Puffy out and closing the garage door each night, the raccoons have lost one supply of food. Somewhat guilty about this situation, I decided to feed them. I had leftover Carrot Raisin Bread from the new Mimi's Café that just opened near my house and some cat food I am no longer allowed to feed to Russ for medical reasons. I put two pieces of the bread and a pile of cat food on a stepping stone outside my window, went back inside and waited.

No more than ten minutes passed before the raccoons made their way to the food and consumed every last crumb before again continuing on their way. Always very curious about me, they kept a comfortable distance and occasionally paused eating to check out what I was doing. The four youths quickly ate their food, taking a moment here or there to squabble like two human children would. The mother took her piece of bread and ate it away from her children, only approaching them to grab some cat food and take it back to her stepping stone.

When everyone had finished eating, they played a bit more and then took turns washing their paws in a small puddle that had formed nearby. I was amazed by this behaviour.

Even now as I finish composing this document, I hear the familiar rustling of leaves. Taking a quick glance out the window I see it is one of the opossum that dwells only feet from me. You know, I really love being able to have some connection with nature and still live within the confines of civilization. There is something really comforting about it. People need to realise that this is the animal's home too and if we are to have any hope of evolving, we must learn to co-exist.

Original Photographs © Edwin Eugene Ott, neoperceptions.com
4 Comments https://mtsutro.org?p=283
Since making a reference to her in a previous article, I have noticed many visitors arriving via search engine on the hunt for pictures of Rosa Parks.

So here you go. A picture of Parks being fingerprinted after her historic arrest. 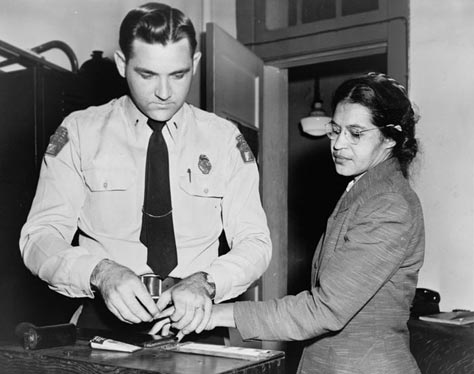 Learn all about the history of Rosa Parks, her fight for equal rights and protection under law and, of course, a few more photographs (including one from 2000).
0 Comments https://mtsutro.org?p=282

Vancouver: Gay Haven?
Apparently not. "The B.C. Ministry of Health is correcting a government website that describes homosexuality as a mental disorder..." [ via ]

The Digital Playa
[ via ]

Valentine's Day at the Capitol
[ via ]

Tale of an autistic savant
Science hopes to learn from this genius. [ via ]

0 Comments https://mtsutro.org?p=281
Back in March 2004 I was approached by Reading A-Z, a producer of online educational materials to assist those learning to read, about the use of a picture taken by my friend Erik Patten and featured on Mount Sutro. Turns out they wanted to use this photo in an upcoming publication. After talking with the company about the specific project, we eagerly gave permission. All I asked in exchange was a free copy of the book and the right to display select content from the book.

The book was completed and released in September 2004 and although I am a little late in writing about this, I am happy to do so now. In the Level V Benchmark title Robots by Lisa Ing, readers of Mount Sutro will see a familiar image: the Tallahassee Bomb Squad robot holding an industrial magnet. Featuring Erik's photograph, page eight discusses how robots are used instead of humans in possibly dangerous situations, such as bomb investigations. 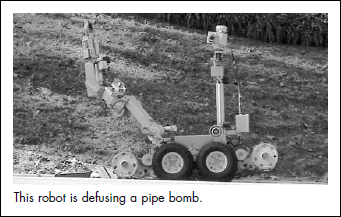 Contrary to published caption, the questionable object was in fact an industrial magnet left at the curb for the trash by our friend, Rick. When joggers running through the neighborhood on 03 December 2002 saw the box filled with the bright blue objects and a piece of paper with Hebrew text written on it, they automatically assumed it must be a terrorist's explosive.

Rick had already began his trip back home to Orlando when the Tallahassee Police and Fire Department plus the Bomb Squad came knocking at Erik's door. He talked with the police and with the cooperation of Rick via telephone, the police found it unnecessary to press any charges and whatnot, but they did insist on allowing their Bomb Squad robot access to the devices to verify and ensure their benign nature. Erik took this opportunity to take several pictures and thus our story concludes.

Everyone enjoys seeing their name (or website address) in print, even if it is only an electronic book.

World War Two Pictures in Color
"While a picture may be worth a thousand words, it is the colored ones that bring us one step closer to the reality of this historic point in time."

The MegaPenny Project
"...aims to help by taking one small everyday item, the U.S. penny, and building on that to answer the question: 'What would a billion (or a trillion) pennies look like?'"