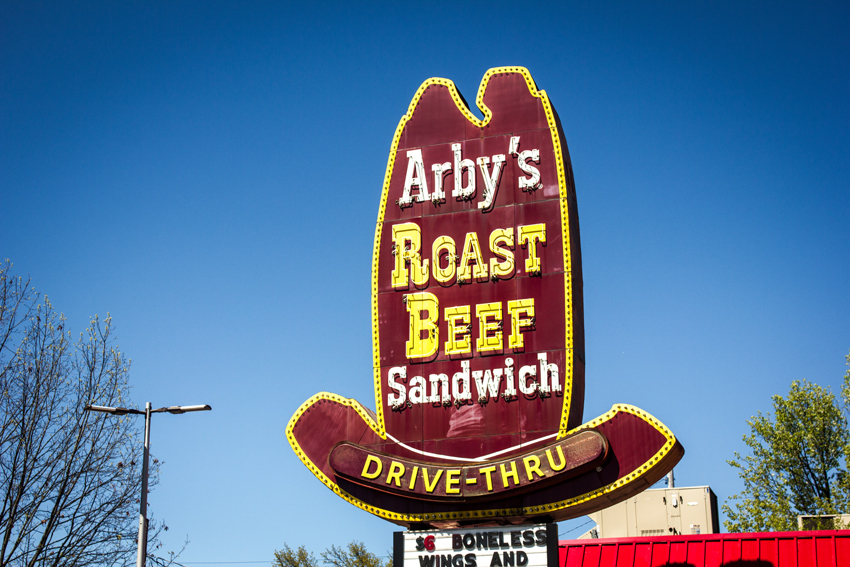 part of the Meadville, Pennsylvania album

I can remember as a child seeing it tower overhead from 1395 Niagara Falls Boulevard, likely as my mother drove us to the Boulevard Mall or other nearby shops in western New York. The classic Arby's hat sign, proclaiming "Arby's Roast Beef Sandwich Is Delicious" in neon, was installed there around 1966 when the restaurant opened, the first of that chain in the Buffalo area.

Since the 1980s when I was living nearby, the Arby's cowboy hat met the same fate as so many other classic neon signs and was demolished sometime between 1989 and 2007. The Arby's itself went out of business in January 2019. An interesting aside, next door is the first McDonald's in New York, which opened in 1959 and underwent a retro-style renovation in October 2005.

Starting with the first 1964 location in Boardman, Ohio, the ten-gallon cowboy hat sign was a fixture at all Arby's restaurant locations built through the 1970s. Originally designed by Peskin Sign Company (1916–2016) of Youngstown, Ohio, the vintage signs have been gradually disappearing with very few of them remaining today. Peskin Sign employee Richard Cook told the Star Beacon in November 2009 that "the big old signs are costly to maintain," at least due in part to having "all these light bulbs, all these old electrical connections." At the time, Peskin was still contracted by Arby's to install, maintain, and remove their signs.

While Arby's is "progressively replacing the old signs with lighter, smaller plastic and aluminum signs," according to Cook, some locations have kept their original signs after being remodeled. The 4411 South Lamar Boulevard outlet in Austin, Texas, the first Arby's to open in that area in 1972, kept their original signage despite remodeling the building numerous times. However, despite keeping it unlit — franchisee Jon Parnell said in October 2018 that the old signs were "rather cost prohibitive" to operate due to high electricity consumption and the need to repaint them every five or six years — the original sign was eventually taken down between February 2020 and February 2021.

When the 3826 East Thomas Road location in Phoenix, Arizona was remodeled in 2019, the franchisee "felt there was some history and some nostalgia there from a sign that people […] just kind of remember and know about." Since "keeping the original sign kind of just seemed like the right thing to do," the franchisee hired Steve Skye with famed sign producer YESCO to refurbish theirs at some expense. The one-month rehabilitation project included recreating neon letters, redoing the electric internals, installing new transformers, swapping out incandescent light bulbs with LED bulbs, and rebuffing the ceramic face. 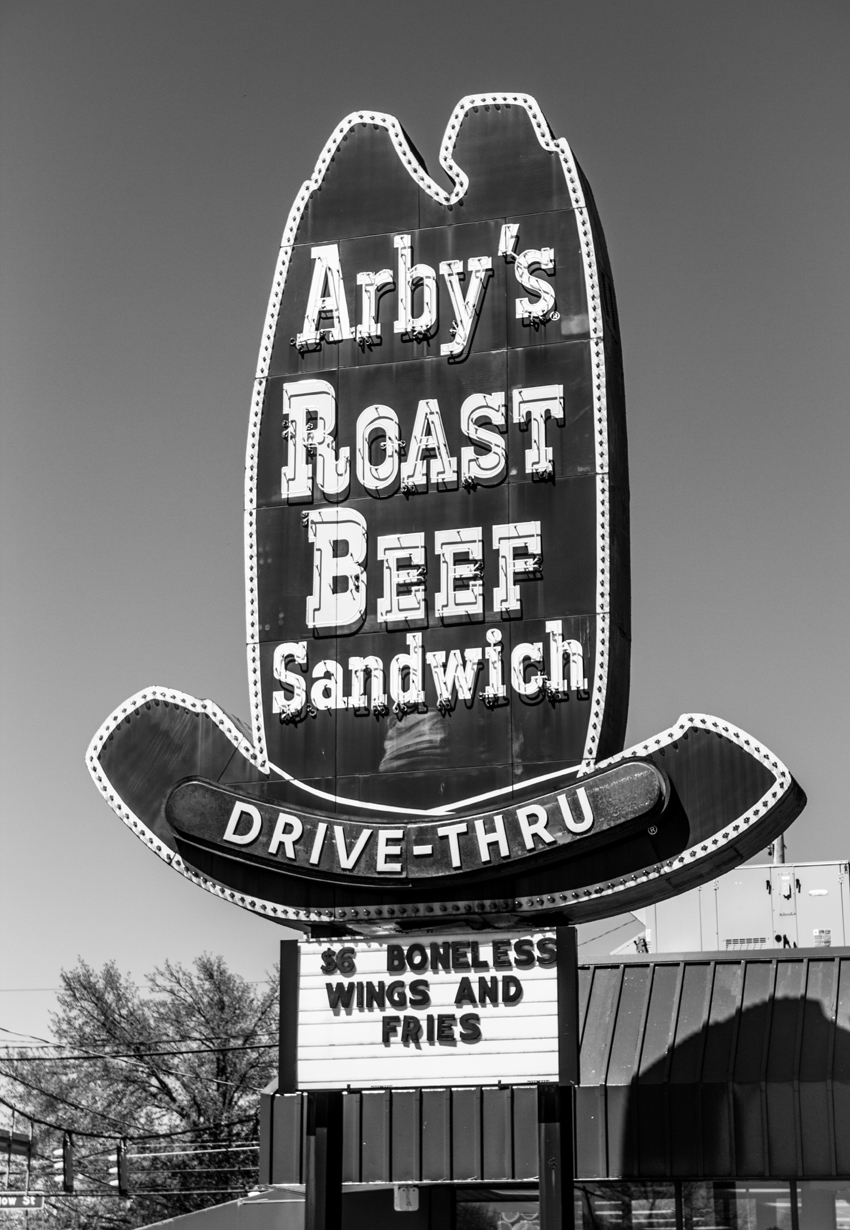 It seems that this preservationist approach has also prevailed at the Arby's in Meadville, Pennsylvania, located about nine miles away from the home of my stepsister and her family. Settled in May 1788, Meadville has a population of 13,050 (2020) and was the first permanent settlement in northwestern Pennsylvania. Its Arby's location, opened in 1973, is the "busiest Arby's franchise" between Rochester, New York and Pittsburgh, Pennsylvania.

During my most recent visit in May 2022, I was pleasantly surprised to see that the forty-nine-year-old sign was still present, albeit modified, and took a few photographs of it. I also returned one night to see the neon in all its glory but regrettably the sign was unlit. What I did not know at the time was that the restaurant was soon to be demolished and the sign saved.

Closed for business at the end of the day on Thursday, 30 June 2022, demolition started the morning of Thursday, 04 August 2022 and by noon "all that remained was the restaurant's red-roofed front section" and the classic sign standing nearby. Due to the "enthusiastic support of area residents" and project feedback received at Arby's corporate going back to before COVID-19, the sign will be kept but moved slightly and refurbished.

Tammy Puharic with Arby's Restaurant Group, Eastern Alliance, told The Meadville Tribune on Thursday, 30 June 2022 "that the sign was an 'important part of the renovations.'" While the restaurant is rebuilt with a smaller dining room and the parking lot reconfigured for a two-lane drive-thru, the sign will be relocated and "protected by a curved island" while also receiving an updated wiring package and new LED fixtures to replace non-functional incandescent lights.

"This was a rare chance that our leadership valued," said Puharic. "We know it was important to the town." Puharic promised that the sign's refurbishment would be "well worth it" despite being "no small feat." There was no mention, however, if the "Is Delicious" portion of the neon sign would be restored to original. At some point in history, that section of the text was cleared and a new three-dimensional piece saying "drive-thru" was mounted to it.

Arby's corporate plans to keep and restore the sign became more solidified through discussions in weekly teleconferences years ago, according to Josh Long with CESO, the Dayton, Ohio engineering firm managing the entire tear down and rebuild project. Remarking on the "keep this sign" feedback that they were receiving about their corporate artifact, Long said that one Arby's official remarked, "it's pretty amazing that a town takes pride in a sign of ours… we should really take that into account."

The Meadville Tribune reported on Friday, 20 May 2022 that a restaurant manager had posted on social media in July 2021 asking for the community to express their interest in keeping the sign. This petition effort "drew more than 2,600 positive reactions and more than 1,500 comments, the overwhelming majority calling on Arby's to preserve the sign."

The final look of the sign cannot yet be shared as the redevelopment project is still underway. While Long told the Meadville Zoning Hearing Board on Thursday, 19 May 2022 that Arby's wanted the project "to be completed by the end of the year," a sign at the restaurant seventy-seven days later said "see you in October." I am sure they wish to finish and reopen as soon as possible, especially since driving to the next closest Arby's is a fifty-mile roundtrip.

More recently on Sunday, 25 September 2022, local construction firm Fuller Building Group shared a photograph of one of their veteran employees working on recently poured concrete. From the position of the photo, it appears to be the new building's foundation under construction. Meanwhile, McCray Technologies posted on Tuesday, 25 October 2022 that they would be working on-site "next week or so" and that the Arby's "should be re-opening soon."

The last time I wrote about an old, neat structure in Crawford County, it was demolished not long after. As more companies take the less expensive or easier routes at the loss of historic signage, it is refreshing to see at least one project acknowledging the desires of the surrounding community and taking preservation efforts. Even if it is just a sign for roast beef sandwiches. 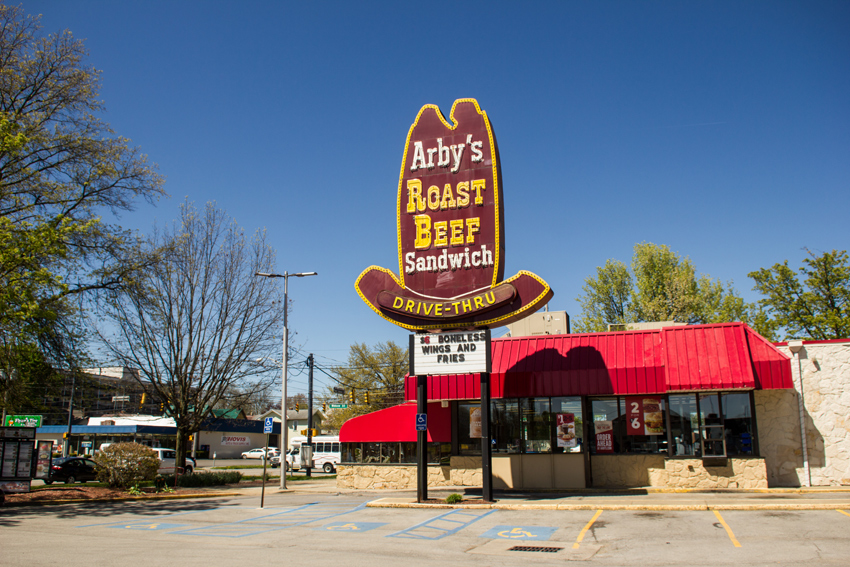 Thanks to a local source, I can report that the "Is Delicious" portion of the sign is indeed being restored! The restaurant is not yet reopened, but work at the site continues. 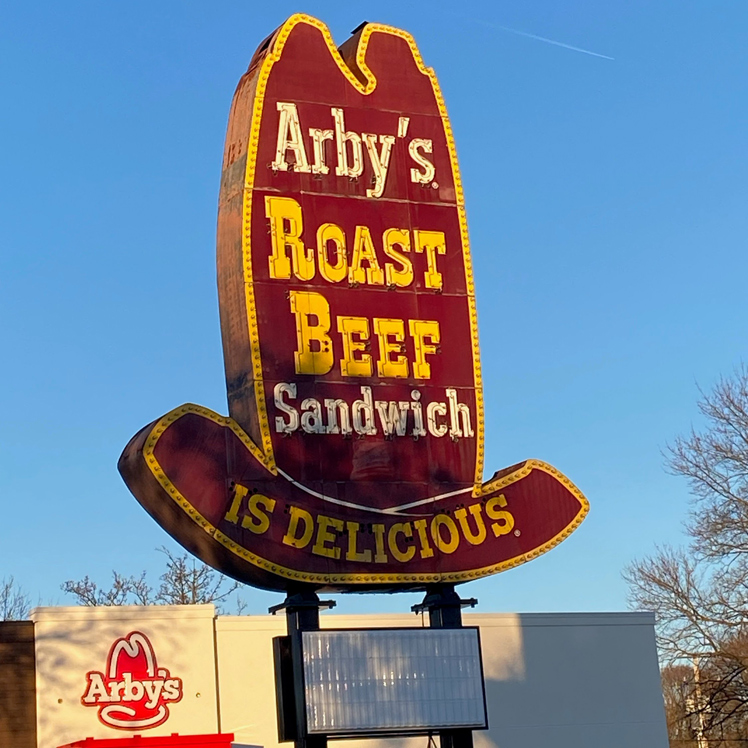