After I graduated high school in 1999, I was still on campus doing technical and administrative work as an OPS employee for Seminole County Public Schools. During the course of my normal duties one day, I happened upon stacks and stacks of old textbooks destined for the great book in the sky.

When I spotted copies of my American History textbook used by teacher and friend William Dempsey, I asked permission to take one. My request was denied because each book is returned to the publisher for credit, but I was allowed to tear out one page.

When Erik and I discovered in class the graphic and caption about President Andrew Jackson's big block of cheese, we were highly amused. It quickly became a matter of reference in conversation with our friends. When I found the books, I could think of no better high school memento than this graphic and quickly scanned the souvenir once home. 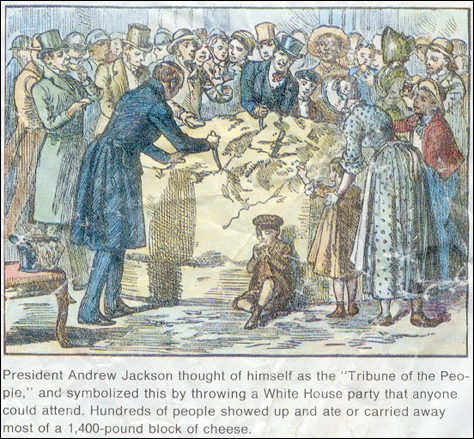 (Click to Enlarge)   President Andrew Jackson thought of himself as the "Tribune of the People," and symbolized this by throwing a White House party that anyone could attend. Hundreds of people showed up and ate or carried away most of a 1,400-pound block of cheese.

In the context of The West Wing, White House Chief of Staff Leo McGarry semi-regularly instructs members of his staff to take meetings with special interest groups and individuals who would not normally receive personal attention from the White House, like the Organization of Cartographers for Social Equality who discuss the Gall-Peters projection map. Each Big Block of Cheese Day as it is known usually starts with an introduction by McGarry.

"President Andrew Jackson in the main foyer of his White House had a big block of cheese. The block of cheese was huge—over two tons—and it was there for any and all who might be hungry. Jackson wanted the White House to belong to the people, so from time to time, he opened his doors to those who wished an audience. It is in the spirit of Andrew Jackson that I, from time to time, ask senior staff to have face-to-face meetings with those people representing organizations who have a difficult time getting our attention. I know the more jaded among you see this as something rather beneath you. But I assure you that listening to the voices of passionate Americans is beneath no one, and surely not the people's servants."

I am pleased and entertained so many people are interested in this small fact from our nation's history and hope this fictional idealism has a place in our government.