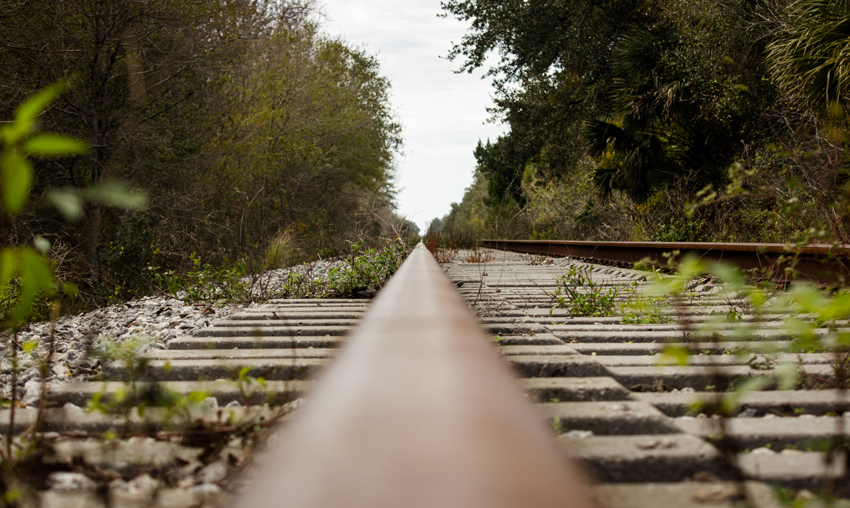 The thirty-eight-mile short line NASA Railroad (NLAX) at Kennedy Space Center has a fascinating history from its construction in 1963, use through the Apollo and Space Shuttle programs, closure, and subsequent reopening to support the new Space Launch System. In lieu of a researched history, I am reproducing the text of KSC Fact Sheet FS-2013-04-075-KSC verbatim.

The NASA Railroad is a 38-mile industrial short line on the Kennedy Space Center in Central Florida. It connects to additional Air Force trackage on Cape Canaveral Air Force Station. The railroad system is government owned and contractor operated.

In 1963, the Florida East Coast Railway built a 7.5-mile connection to the Kennedy Space Center from its mainline just north of Titusville, Fla. The line required a drawbridge to be built over the Indian River, part of the Intercoastal Waterway. The steel bridge and its approaches are approximately a half-mile long, built on concrete pilings. The draw span stays open continuously until a train approaches, and the crew activates a switch to lower it.

East of Wilson Yard, the line divides with a nine-mile branch going south to NASA's Vehicle Assembly Building and the Kennedy Space Center Industrial Area, the other another nine-mile branch going east toward the Atlantic Ocean for service to the NASA launch pads and the interchange with the Air Force track.

NASA purchased the Florida East Coast portion of the railroad line in June 1983. Because of the hazardous commodities hauled over the railroad, particularly the solid rocket boosters for the space shuttle, NASA decided to completely rebuild and upgrade the line.

The original track was 100- or 112-pound jointed rail on wood cross ties and limestone ballast. It was replaced with 132-pound continuous-welded rail and concrete cross ties.

The work was done by the track maintenance subsidiary of the Florida East Coast.

The track was constructed to 60 mph standards, which is Florida East Coast mainline speed; however, normal operating speed is 25 mph to reduce maintenance and increase the life span of the track.

The primary traffic on the NASA Railroad has been the solid rocket booster segment cars. Each of the two booster rockets on the space shuttle consisted of four segments, each 32 feet long and 12 feet in diameter weighing an average of 150 tons. So, each launch requires delivery of eight segment cars.

Each segment car weighs 510,000 pounds and there were a total of 24 railroad cars in the overall fleet.

They were delivered to Kennedy from the Thiokol plant in Wasatch, Utah, over a route that uses the Union Pacific, Kansas City Southern, Norfolk Southern, CSX and Florida East Coast Railway.

The segments were stacked in the Vehicle Assembly Building before being joined with the external tank and space shuttle orbiter. After launch, the twin solid rocket boosters, empty of their fuel, are recovered from the Atlantic Ocean, broken down into individual segments once again and returned to Thiokol by rail. These solid rocket boosters also were used for the Ares IX test flight.

The Air Force also had until recently three specially modified SW-8 locomotives for the Titan IV rocket. Used to switch the solid rocket booster segments that are delivered to Cape Canaveral Air Force Station, the three units were completely rebuilt by the mechanics at the NASA Railroad locomotive and equipment shop. These locomotives would later deliver the fully assembled Titan IV rocket to the launch pad. The Titan IV program has since ended. The NASA Railroad also has had a unique move interchanging traffic with Cape Canaveral Air Force Station, using specially designed cars for the Air Force and the Navy.

The Air Force used helium to purge the lines of the Titan rockets that use liquid fuel. However, the helium arrives as a liquid. A plant at Kennedy converts it to a gas which is then loaded into these specialized cars that are hauled by the NASA Railroad to the Air Force interchange. These cars originally were owned by the Bureau of Mines, and when the government left the helium business, some of the fleet was transferred to Kennedy for in-plant use.

The NASA Railroad owns a small equipment fleet of specialized cars and hoppers, as well as some highly specialized cars such as the solid rocket booster structures car. Many of these cars travel to other NASA locations to bring back components that cannot move by highway. An example are skirts and frustums which are very large, bulky rocket motor parts that are transported on the booster structures car.

There are some significant cost-saving opportunities available to NASA where modified or specialized railroad cars could be used, avoiding the expense of shipment by cargo aircraft or barge. The cars sometimes also eliminate the need to disassemble oversized items. The railroad shop has either modified existing equipment or fabricated new rolling stock. In some cases, a modified freight car could be cost effective just for a single one-way trip.

On March 30, 1982, space shuttle Columbia landed at the back-up landing site at the White Sands Test Facility in southern New Mexico, concluding STS-3. The dry lake bed runway at Edwards Air Force Base was flooded from heavy rain. All of the ground support equipment to be used to service Columbia after landing had to be moved from Edwards Air Force Base in California to White Sands, near Las Cruces, N.M.

If ever needed, the original plan was to fly the equipment in waves of Air Force C-5 and C-141 air cargo planes. However, at the time of the STS-3 landing, they were not available in sufficient time to have the equipment on the ground at White Sands for Columbia's arrival. Using equipment furnished by the Sante Fe Railroad, two trains were used to move the equipment over the lines of Sante Fe and Southern Pacific for the 1,000-mile distance between Edwards and White Sands. By using rail, the cost saving to NASA was more than $2 million for the equipment's round trip.

"The Locomotive Rolling Down The Track" https://mtsutro.org?p=1292