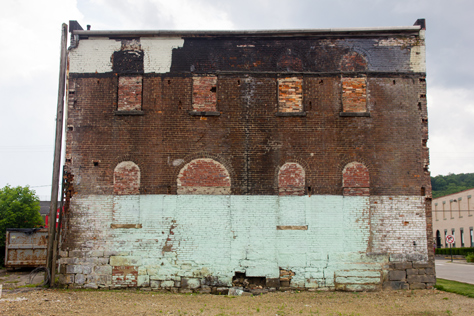 The back wall of the Titusville Moose Lodge building (1873) that abutted a two-floor KFC until Tuesday, 27 August 2013 when the latter was demolished.

Following a visit to the Drake Well Museum and lunch at Sam's Restaurant, we briefly stopped at the Sheetz gas station in Titusville. I immediately grabbed my camera and walked next door to where I had spotted a neat old building.

It was a brick structure with two floors and displaying signage for Titusville Moose Lodge 84. It looked like another building once stood behind it, where I was walking and taking pictures. Since we still had to drive to Pymatuning State Park an hour west, I quickly shot nine frames and headed back to the truck. 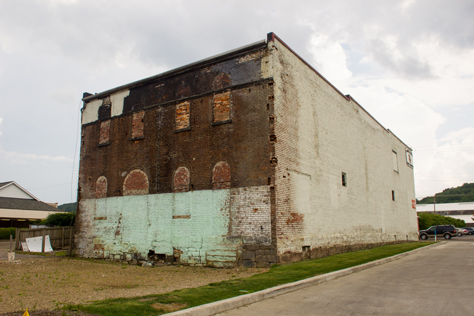 I rather enjoy researching the places and things that I photograph after the conclusion of a trip. Using this information to write photo titles and articles is not only educational, but can also provide a broader context that augments the original experience in sometimes surprising ways.

In the case of these photos, I had two main questions to answer. How old is the building and did another once stand right up next to it? 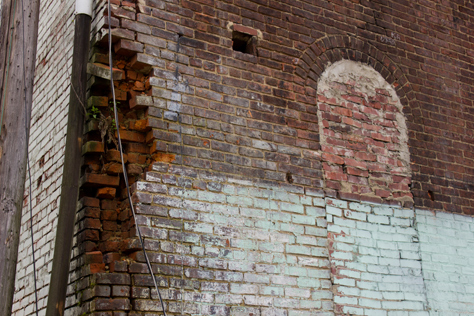 Crawford County is no exception to this, but they do charge fees to download their records. Since the year of construction was not listed in the brief amount of data shown, I decided to seek out alternative sources.

Fortunately, the Titusville Herald established in 1865 maintains a free archive of articles. Even though Titusville is a small city of under 6,000, I managed to find around twenty Herald articles that helped answer my questions, provide context and set the scene. Long live independent newspapers! 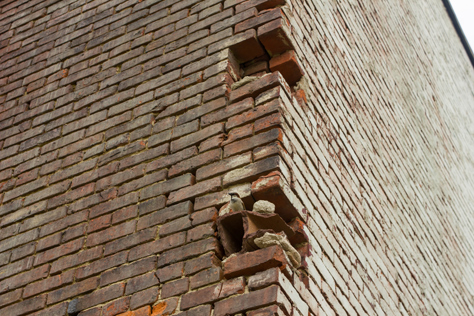 Although I got the answers to caption my pictures, I may as well summarize the timeline and share the full story. In a small community like this, the following events must have been the absolute talk of the town for at least three years.

The properties include a two-floor Kentucky Fried Chicken at 327 West Central Avenue that closed around Tuesday, 12 August 2008 after thirty-three years of business; the former steelworkers union building at 340 West Spring Street occupied by Genesis Family Center until around Wednesday, 17 June 2009; and The Medicine Shoppe at 329 West Central Avenue which closed on Monday, 23 July 2012 after about thirty years of business.

Wednesday, 24 March 2010
Rather than sign a similar sale agreement with Sheetz, the Titusville Moose Lodge Number 84 at 334 West Spring Street instead votes to accept a sale offer from United Refining Company. Although Moose officials will not comment, it is reported that United Refining's offer included a two-year building use agreement while Sheetz' terms only included continued use for less than one year.

As a result of the successful bid on 334 West Spring Street by United Refining — a "major provider" of Titusville gasoline that owns Sheetz competitors Country Fair and Kwik Fill — Sheetz announces that they "no longer [have] plans to construct a convenience store and gas station" after the failed real estate deal.

Sheetz says that they "have no plans to build in Titusville at this time" and are not "developing any plans" while still remaining open to the idea. Two of the affected property owners express surprise and confusion over the Moose club's decision to sell to United Refining over Sheetz.

Wednesday, 05 May 2010
Moose Lodge 84 applies for a city zoning variance to move into a building at 1003 Industrial Drive owned by Precision Manufacturing Institute of Meadville. The variance is required because Industrial Park West is zoned for industry, while the Moose organization's "lodge is legally defined as a place of assembly."

Moose officials will not comment on the situation "until the [Titusville zoning hearing] board's decision [is] finalized." The matter is scheduled to be heard by the board the evening of Wednesday, 19 May 2010.

Monday, 17 May 2010
Two days before the hearing, Moose Lodge 84 withdraws their variance request citing their decision to abandon pursuit of the 1003 Industrial Drive building. Instead they say the club is searching for new sites to consider. 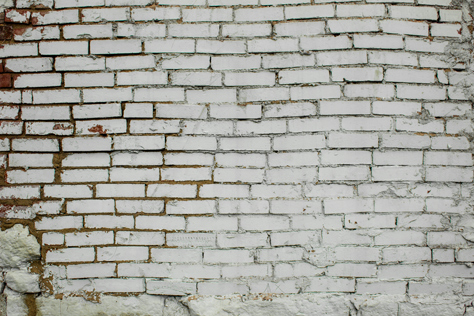 Friday, 16 July 2010
Amid local gossip, Sheetz reiterates that they "do have an interest in possibly locating to Titusville, but [have] no definite plans at this time." They also state that they have not purchased any buildings in Titusville.

The owner of 340 West Spring Street claims that Sheetz "still 'has an interest' in purchasing" his building, but the owner of 327 West Central Avenue says that "Sheetz was no longer interested in purchasing that building."

Wednesday, 18 August 2010
In response to customer queries, The Medicine Shoppe announces that they would move elsewhere in Titusville should they sell their property to Sheetz. Although no deal has been made and the owners do not say so, the announcement suggests that Sheetz continues to be interested in their property.

Tuesday, 21 September 2010
It is revealed at a Titusville City Council meeting that Sheetz does indeed maintain their original plan to purchase the properties in question to open a new gas station and convenience store.

At issue now is their August 2010 request to close the segment of South Monroe Street between West Spring Street and West Central Avenue. The council tables their bill on the topic citing a need to discuss the impact with a professional traffic engineer. The plan will also need to be approved by the Pennsylvania Department of Transportation and a traffic study conducted.

Tuesday, 14 December 2010
In a special meeting, the Titusville City Council unanimously approves Council Bill Two closing the small segment of South Monroe Street as per the Sheetz construction plan. The final 1.71-acre lot will consist of the Genesis and Medicine Shoppe plots, the roadway segment and a closed BP station immediately to the west of the roadway segment.

Wednesday, 07 December 2011
Sheetz representatives officially present their plans to the Titusville City Council, which include a projected start date in mid-2012. At this time, Sheetz has already purchased the Genesis and BP properties while "The Medicine Shoppe sale is expected to close in January or February" of 2012.

The plans — already reviewed and recommended for approval by the Titusville Planning Commission — include the physical layout of the property and parking, the design and appearance of the building and pump island, considerations for delivery trucks and other details. It is anticipated that the council will vote on the plans during their regular meeting on Tuesday, 20 December 2011.

Monday, 06 February 2012
The Medicine Shoppe property sale to Sheetz closes. The terms of the sale give the business six months to relocate, which must be done before Sheetz can begin construction. This is the final sale of property to Sheetz for this project. 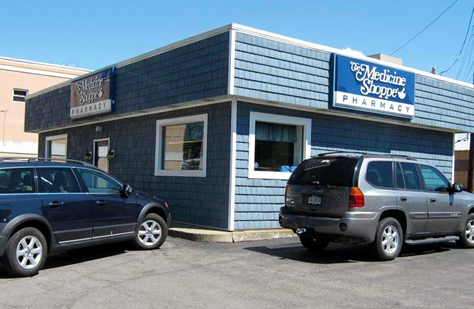 Thursday, 10 May 2012
The Titusville Herald makes its final newspaper delivery to United Refining's County Fair location at 103 South Perry Street. As of the following Tuesday, the location will be a GetGo station owned by Giant Eagle.

Thursday, 31 May 2012
Sheetz begins "moving dirt and excavating the site" in preparation for construction. Assuming no delays, the store should take three months to build and be ready to open in the summer. This is dependent on when The Medicine Shoppe moves out however; they have until Monday, 06 August 2012 to do so.

Tuesday, 10 July 2012
The Medicine Shoppe announces that they will close on Monday, 23 July 2012. Instead of relocating as originally stated, the business will merge with the CVS Pharmacy at 110 East Central Avenue. Explaining the decision, they credit the insurance industry's "ever-changing demands and programs" and the resultant inability to provide "the services that [they] believe [their] patients deserve." 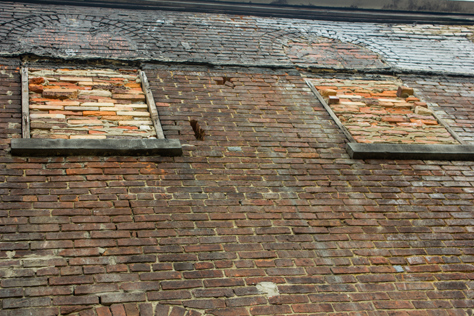 Tuesday, 11 September 2012
It is reported that Moose Lodge 84 will relocate to a new building under construction at 614 West Central Avenue, site of the former Carriage City Car Wash, in early 2013. The club says that limited parking and disabled access at the current location are their primary reasons for moving.

The car wash was demolished on Thursday, 23 August 2012 and construction started on a new 5,600-square-foot building. The new facility is expected to be finished in early January 2013. Moose officials state that they currently have 3,700 square feet of space available on the first floor of 334 West Spring Street. United Refining again fails to comment on their plans for the building once the Moose move out is complete.

Attributing lodge officials, the Titusville Herald states that the 334 West Spring Street building was erected in 1873.

Thursday, 21 March 2013
The Titusville Herald learns that Sheetz has scheduled an opening date of Thursday, 30 May 2013 for their new location. They also confirm that Sheetz purchased the old KFC building abutting the Moose Lodge building to the north earlier in the month.

Tuesday, 27 August 2013
Crews begin demolishing the old KFC building. Sheetz representatives are unable to answer questions about their future plans for the site. 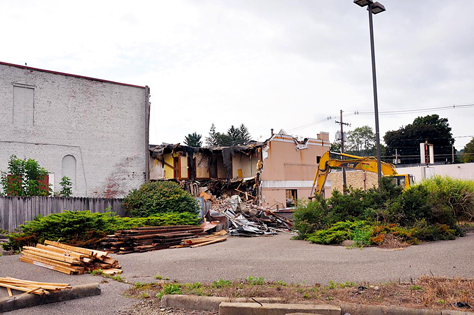 How the KFC building appeared in October 2008… 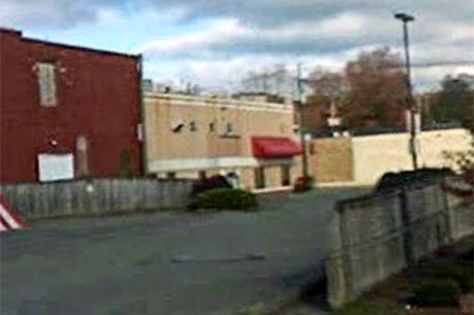 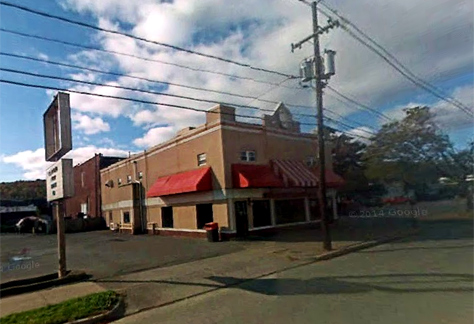 Tuesday, 08 April 2014
Sheetz engineering consultants present a plan to build a car wash at their new location. The plan calls for a "sewer planning module" to be installed on the land vacated by the KFC building.

The engineers unsuccessfully "approached the owner of the former Moose Lodge building to sell the vacant structure." Instead, their plans have the car wash accessible from West Spring Street and wrapping around the Moose Lodge building. Several reviews and approvals will be required, the first of which was scheduled for vote on Tuesday, 15 April 2014. It was approved unanimously.

Monday, 24 November 2014
As far as I can tell, the future of the old Titusville Moose Lodge building is still unknown. Regardless of whether or not United Refining bought the building to screw Sheetz, they may yet keep it around. But with increased local development being welcomed, I fear that a demolition date may be inevitable.

I would of course prefer that a building from 1873 be preserved and repurposed like has been done elsewhere. Four days later on this trip, I would see an example of this along the Erie Canal in North Tonawanda, New York. Opened in 2011, Remington Lofts is an "apartment complex with eighty-one luxury units, an upscale steak and seafood restaurant, a yoga studio and a hairstylist school."

That complex was repurposed from the former Remington Rand factory first built in 1895 as the power house for the Buffalo and Niagara Falls Electric Railway. After later being used to make wooden carousel horses, the facility was occupied by engine maker Herschell Spillman Motor Cars. Later, Remington Rand used the space to manufacture typewriters (the first to use the QWERTY keyboard layout) and the UNIVAC computer.

Aside: I am unsure if they made them here, but Remington Rand also started a line of electric razors in 1937. The Remington razor is still around today although the brand was sold in 1979 to Victor Kiam who coined the phrase, "I liked the shaver so much, I bought the company."

Now armed with all of this additional information, I wish that I would have shot the front of the Moose Lodge building. With any luck, it will still be around the next time I am in the area.

[UPDATE] Sunday, 31 May 2015
On the afternoon of Saturday, 23 May 2015, I received an email from Titusville Herald Reporter Joshua Sterling. He came across this article and wanted to share an update on 334 West Spring Street.

"Unfortunately, the building was recently razed," wrote Sterling. "No future plans are known, yet."

Demolition began on Thursday, 12 March 2015 by Keith White and Son Excavating of Warren, Pennsylvania and was expected to take about a week to complete. Afterward, further work would be done to fill in the hole remaining.

According to a worker interviewed by Sterling at the site, "demolition was originally slated for five years ago, but was delayed due to necessary asbestos removal." The same worker additionally indicated that the building's walls were very strongly constructed.

Sterling also took and emailed a photograph of the demolition in progress on Saturday, 23 May 2015. 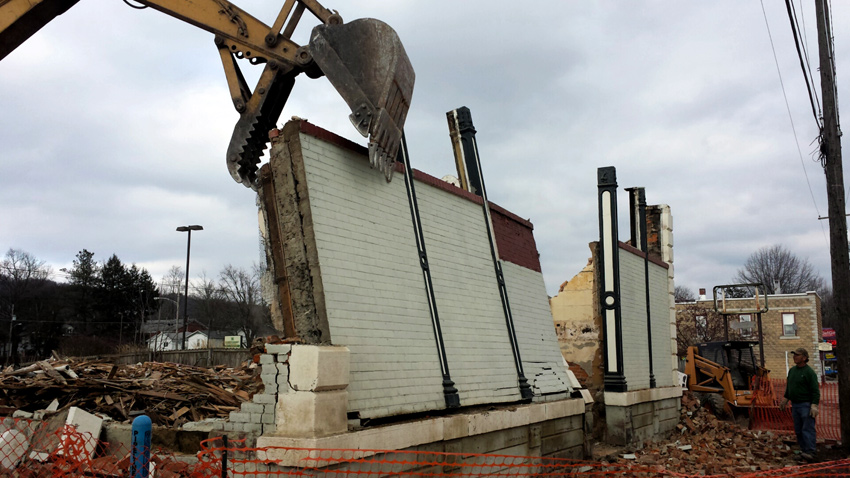 An earlier photograph of the unfortunate demise of the 1873 building was published by Sterling on Friday, 13 March 2015. 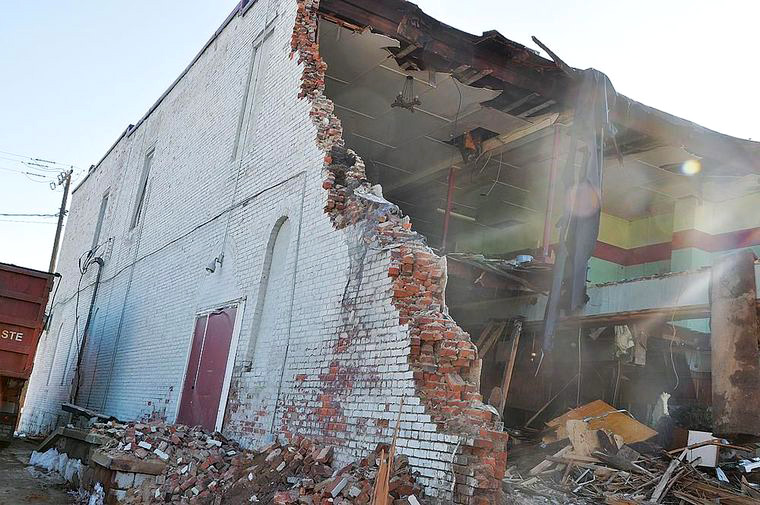 Special thanks to Joshua Sterling for emailing me the update and photograph!