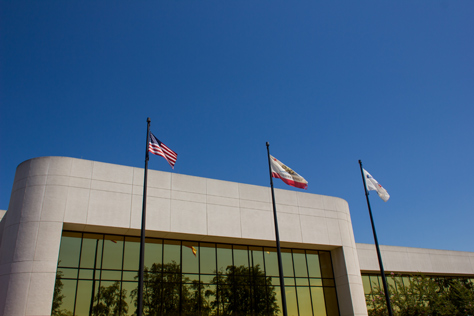 Front entrance, parking and triad of flags at the front of 400 National Way (1984), the fictional PlayTronics headquarters building in "Sneakers" (1992).

part of the 400 National Way album

Of the films that I consider to be favorites, there are a select few that were also influential in some way. It is easy to say that the 1992 tech caper Sneakers is an excellent example of such a film. 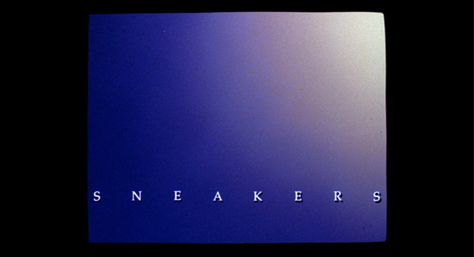 I was four months away from turning twelve-years-old when Sneakers premiered on Friday, 11 September 1992. I cannot remember whether I saw it at the AMC Interstate Mall 6 (1974–1999) or General Cinema Altamonte 8 at Renaissance Center (1990–2000), but Sneakers was a real enjoyment for a young man already interested in electronics and computers.

Similar to the way that Back to the Future made me want to learn how to drive a manual transmission when I got a license — I did and have owned several cars with standard transmissions — Sneakers encouraged me to continue pursuing my interest in technology for fun and as a prime future career candidate. 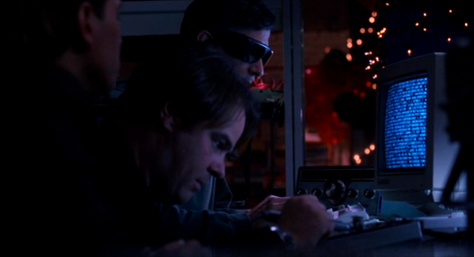 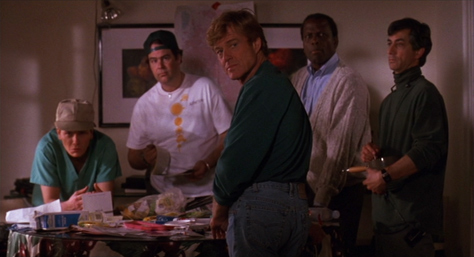 As is the standard practice in Hollywood productions, much of the filming took place in and around Los Angeles — the December 1969 flashback (Courthouse Square in the Universal backlot), the tunnel scene (2nd Street Tunnel) and Liz's music school (500 Bellefontaine Street in Pasadena), for example.

Since the film takes place in San Francisco, there are a few scenes featuring iconic Bay Area locations. I persuaded Mom to drive me over the San Mateo Bridge in the mid-1990s so I could hear the concrete seams that play a key part in the characters finding the antagonist. Coming from the city, they should be driving the other way, left toward San Mateo, in this shot. 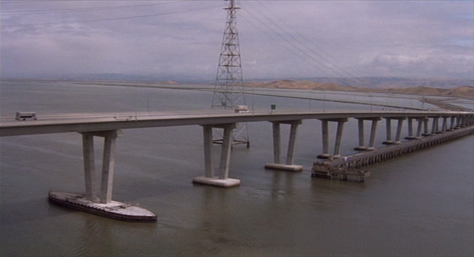 In 2009, I stopped by the former Hills Brothers Coffee building (1925) plaza along The Embarcadero at 2 Harrison Street where Martin Bishop (Redford) makes a delivery. You can see the Muni F line under early construction. 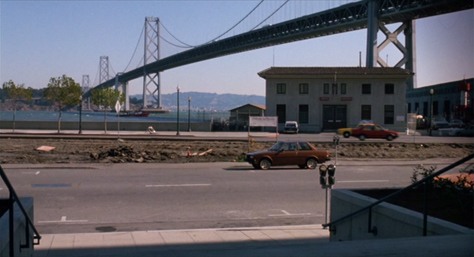 More recently in January 2013, I planned to stop by the Sneaker's lair exterior at the Fox Oakland Theatre (1807 Telegraph Avenue in Oakland) but it was dark by time I arrived and decided to carry on. 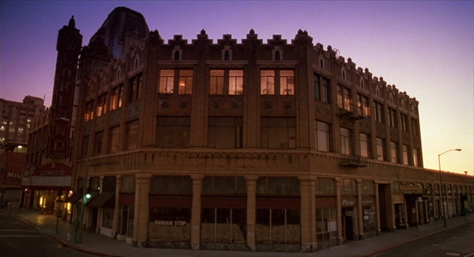 But before the internet, I could not figure out just where a certain building was located. During the course of the plot, Bishop and gang expertly figure out the location of antagonist Cosmo (Kingsley). Identified as PlayTronics — "the future of toys" — the building actually serves another purpose as the front of Cosmo and his not-so-friendly thugs. 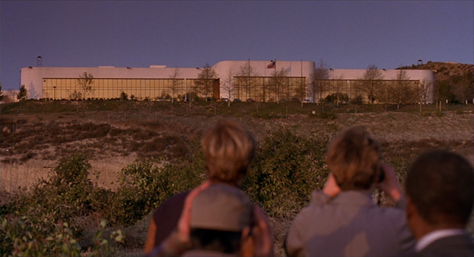 While the location is played as near San Mateo in the film, driving across the bridge as I did will not bring you anywhere close to the building, ironically home to Countrywide Financial in the 1990s and later acquired by Bank of America in 2008. What would Cosmo think about that?! 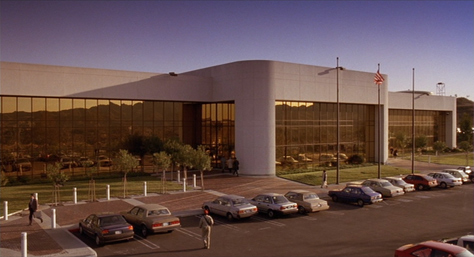 Fulfilling a two decades-long desire, I drove to 400 National Way a.k.a. 2800 Madera Road in Simi Valley on Thursday, 22 August 2013. I was staying in Newport Beach for a week on business and had this day free to tour greater LA shooting locations, starting with the trek to PlayTronics. 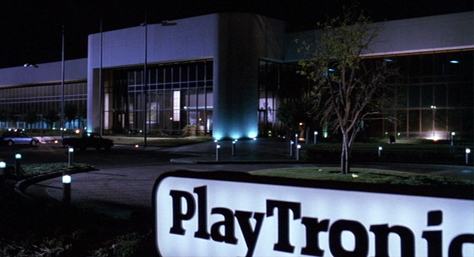 With James Horner's Sneakers score featuring Branford Marsalis playing the entire eighty-five mile journey, I made my way north through Los Angeles. After a late start and congestion due to an accident on I-5, I was finally at California State Route 118 Exit 22B for Madera Road northbound and my destination. 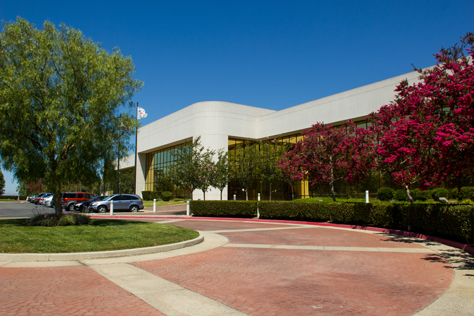 I do not know how many other people stop by because of Sneakers, but I did not expect any trouble since a public bank branch is on-site (or at least was; it is not listed on their website). I started at the southern dead end driveway, which features limited parking and two brick turnaround circles. 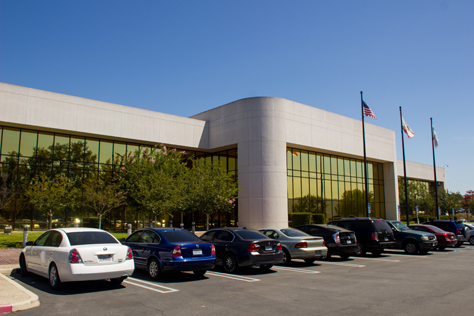 Walking west in front of the building on the south side, I wanted to get closer to where Cosmo's and Werner Brandes' (Tobolowsky) offices were located. 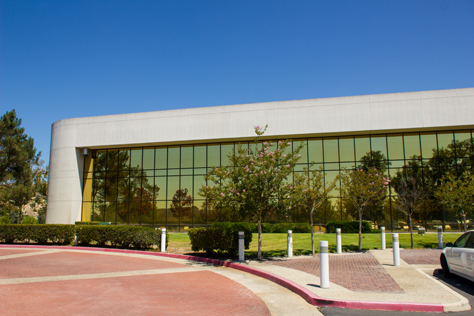 I was amused to find that a security camera is installed at the end, in front of what was the corner of Cosmo's secure third floor office. 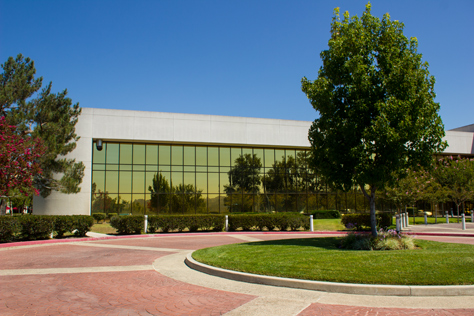 It was great to see the trees living in the middle of the two turnaround circles doing well. You can see in the film frame of the PlayTronics sign above that the trees existed during filming in January 1992 but were still quite young and small. 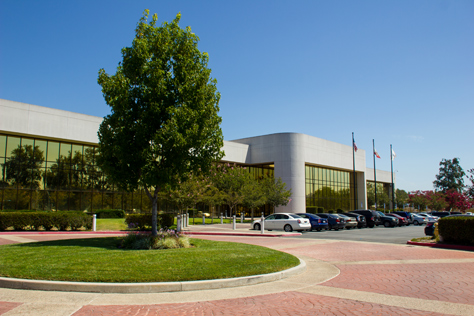 Heading back toward the car, I took note of the triad of flags on display at the building. In the movie, the United States flag is displayed on the center flagpole while the other two are unused. Three flags were flying on this day: United States, State of California and Bank of America. 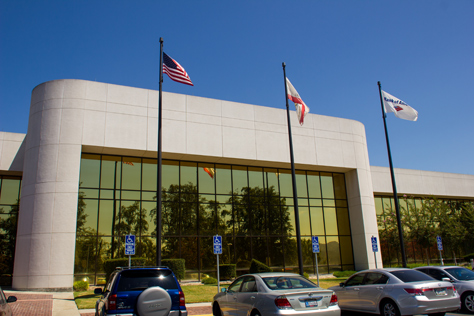 From the southeastern driveway circle, there is a view of the "very gentle slope" that Bishop misleadingly refers to while helping Whistler (Strathairn) on his heroic drive. On the hill beyond is a water tank, one of the forty storage facilities operated by Ventura County Waterworks District 8. 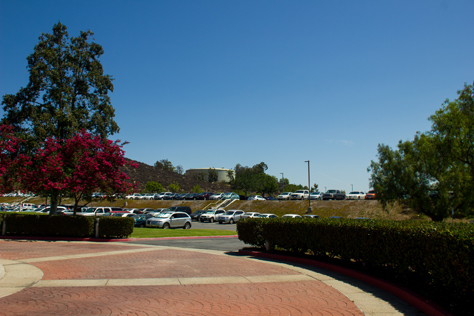 Moving around beneath the southeastern circle, you can see where the production installed the lit PlayTronics sign. To the right, they had also added a guard post with a boom gate at the entrance to the first row of parking. That is funny to me because there are seven other ways into the lot on this side alone. 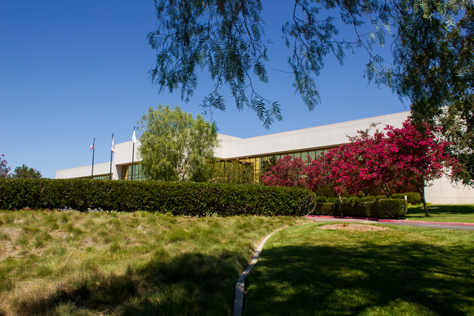 That is a great thing about fiction; the workings of a location do not necessarily have to correspond with their real-world counterparts. Another example is when Brandes takes Liz (McDonnell) to PlayTronics. He is coming from a dead end and would have already passed the building to take the route we see him drive.

I next decided to drive around a bit myself. Given its proximity to an employee entrance and break area, I decided to photograph the loading dock while driving up to it. Aside from some reflections in the windshield, I got a nice view. Noticeably absent is the ladder that Bishop climbs down. 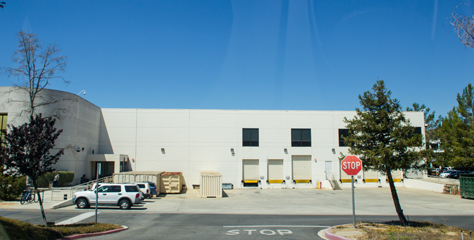 Turning right at the loading dock, I drove around the northern side of the building and past a parking garage to come around to the western parking lot. Pulling up the main row at the south, I approached a signed Bank of America entrance. Next to the door there is a nice patio with umbrella-covered tables. 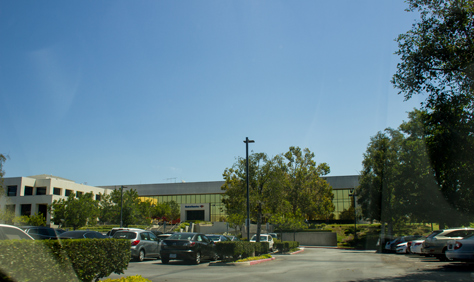 Finally, it was time to head to the far corner of the parking lot, near where Whistler starts his drive. I parked in the last row and got out again. It was ninety-three degrees and would get up to ninety-seven before I left the property. 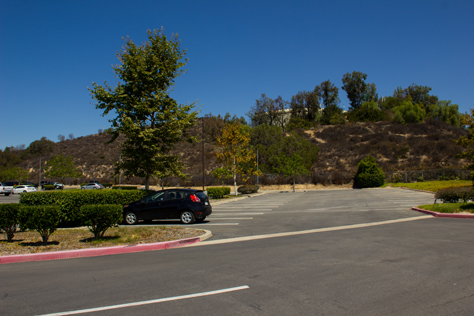 I walked east as far as I could and was highly amused to discover a gate is actually installed where there had been one in the film; Whistler backs-up through it at the start of his drive. 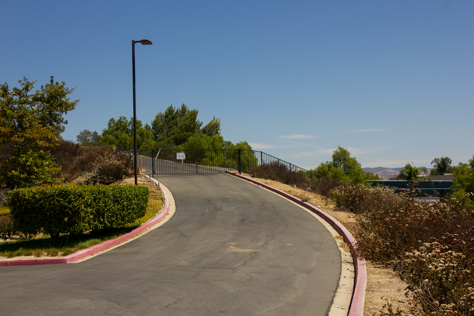 The gate keeps people away from the county water tanks installed there. One is readily visible sitting over the northeast corner of the parking lot, but the other is a little over a quarter mile north of that. The paved road ends at that second tank, although an unpaved road continues and connects to others winding through the undeveloped native terrain. 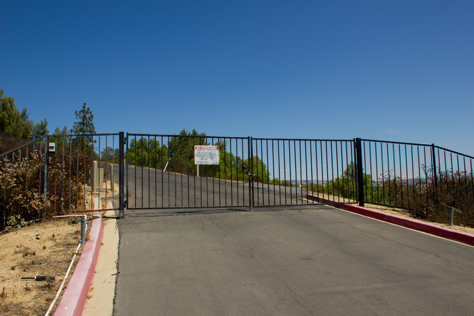 This vantage point also offered an unobstructed panorama of Simi Valley, the Ronald Reagan Freeway (SR 118) and the Simi Hills mountain range beyond. 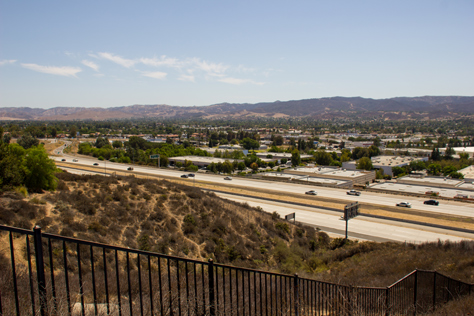 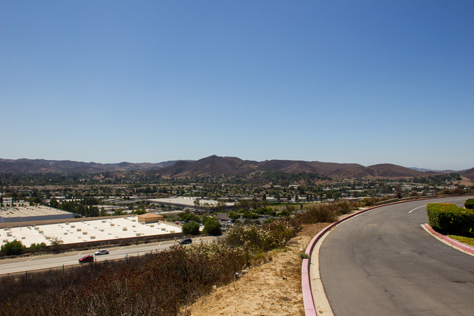 Cooling off in the car, I sent one or two short emails to commemorate my accomplishment before it was time to head to my next destination. 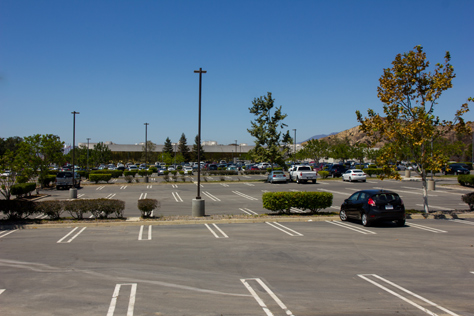 It was great to finally be able to visit this place. Unlike so many other locations, everything here besides the botanical growth looks pretty much as it did on film.

Although some of the technology depicted is dated, this does not detract from the movie (quite the contrary). Indeed, Sneakers turned out to be far more predictive than we could have ever imagined.

Take this dialogue from the film between Bishop and Gordon (Busfield) that came to mind in August 2013, two months into the Snowden-induced revelations about the NSA and global surveillance.

Uh, sorry to waste your time, gentlemen.
I don't work for the government.

Oh, you're the guys I hear breathing
on the other end of my phone.

No, that's the FBI. We're not chartered
for domestic surveillance.

No, that's the CIA. We protect our
government's communications. We try to
break the other fellas codes. We're the
good guys, Marty. 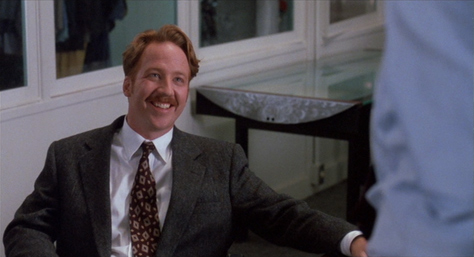 And then there is this poignant exchange with Bishop, Crease (Poitier), Whistler and Mother (Aykroyd).

It's interesting, don't you think you guys,
that the NSA's here? I thought the FBI was
supposed to do this kinda thing.

Absolutely. This is outside the NSA's
jurisdiction.

Unless the NSA didn't want anyone to
know about Janek's little black box.

I keep thinking about something Greg told me.
He said that our codes are based on an
entirely different system than the Russian
codes, so this box wouldn't really work
on them. The only thing it'd really be
good for is spying on Americans.

Well sure, with a box like that they could
read the FBI's mail.

Or the CIA's. Or the White House's.

No wonder they don't want to share with
the other children. 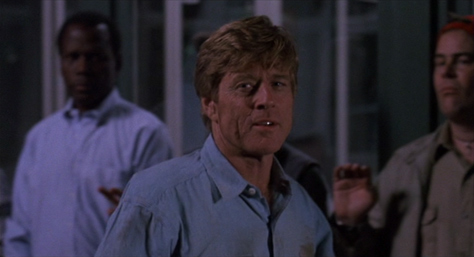 Hell, the phrase "Setec Astronomy" even appeared on a National Reconnaissance Office uniform patch. The very existence of the NRO was not declassified until Friday, 18 September 1992 — a week after the movie came out.

On a final note, Sneakers looks great on Blu-ray! Although it lacks any of the special features that are on the "Collector's Edition" DVD, the picture and sound on the region-free import Blu-ray (barcode 5050582929393) are wonderful.

The disc may lack bonus material, but does come loaded with numerous language dubs and subtitles. I dislike dubs when a film is not in English, but watching one I know very well in say, Japanese, is a lot of fun!