Though somewhat hard to believe, Wednesday (01 March 2006) is the six-month anniversary of my preliminary move to Tallahassee and of my first day at The Agency. Although it does not seem like much time has passed, I cannot help but notice how much my life has changed—for the better—in that span.

In lieu of droning on about self-worth and accomplishment, I thought it might be a good idea to go back and tell a few stories from those mostly undocumented months. The first stop is my birthday, Sunday, 29 January 2006.

I had not planned to do anything special for the day, but as it approached and interest in having a social gathering grew, plans started to take shape. Chris drove in from Orlando to spend the weekend in town. Tom, here on business, was not going to be around by the weekend but did manage to go out with me during the week.

Thanks to Marc, a final schedule of events was assembled: dinner at Julie's Place on Monroe Street, participation in a local tradition called The Tennessee Waltz and finally, drinks and dancing at Brothers.

I started the evening by making two mistakes. First, I quickly consumed several well-made cocktails—Grey Goose and tonic, of course—on an empty stomach. Second, I ordered a light meal consisting of variously prepared shrimp and rice. I learned that if you are planning on consuming alcohol throughout the course of your evening, order the steak. Boy, I wish I had. Regardless, the food and company was excellent.

Our next destination was the Tennessee Strip, consisting of a few blocks of restaurants, shops and bars. Okay, mostly bars. This area is the one-stop shop for many college students' party needs, so I generally avoid it. Nevertheless, since I do enjoy one joint within the strip—Poor Paul's, which features no cover, decent drink specials and darts—I was convinced to participate in the Waltz.

Traditionally a Tallahassee rite-of-passage for those turning the magical drinking age of twenty-one, the Waltz executes more like a stumble or blur for most. The idea is to travel from one bar to the next, enjoying a free birthday drink at each. We decided to modify things a bit and only went to Poor Paul's and then Bullwinkle's. The latter location gave me a sticker to commemorate my Waltz and a drink coupon that purchased me a small pitcher of cocktail. No surprise, this is around the time my memory of the evening starts to dissipate.

We wrapped things up as planned by attending Brothers' famous eighties night. Needless to say, I do not have much narrative from here on out. I know I was on the dance floor with the group, then outside on the patio for the rest of the time desperately trying to maintain consciousness. I finally tossed the towel shortly after one in the morning and had Chris take me home.

Eric: (hung-over)  My head hurts.
Red: That's your brain trying to comprehend its own stupidity.

My mother decided that instead of driving to Tallahassee or having me drive to Orlando for my family dinner, we should meet at a location in between. I suggested Jacksonville since Gainesville and Ocala are not exactly renowned for fine culinary establishments. She selected The Chart House, a smallish chain of fine dining eateries.

My experience at this restaurant was nothing less than excellent. With the unfortunate exception of people who have no class and came dressed in jeans, Hawaiian t-shirts and shorts, the entire experience was fantastic. The building itself is extremely modern in design, but uses traditional materials like stone and wood. The bartenders know how to make a drink; the fillet mignon was prepared perfectly; the cut of beef itself was so prime that you hardly needed the steak knife to cut it; the lobster bisque was so good I would have liked to have ordered another; and the service was what you would expect from a restaurant of this caliber. After dinner, we took a quick trip to The Jacksonville Landing and had a quick cocktail at the The Twisted Martini. It was all extremely nice, drive or not. 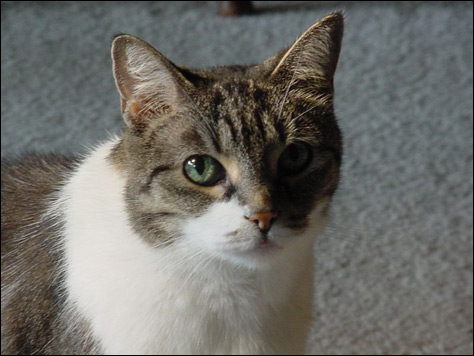 Ever since she looked up at me, staring straight into my eyes, meowing with as much enthusiasm as all the other adoptable kittens around her, Russ and I have shared a special bond. We learned about the world around us together, played together and moved to Florida together.

She would hiss, growl and run away from visitors. Who can blame her for speaking her mind? If only I could tell people what I really think of them; she really had the advantage. When no one else was around, Russ was the sweetest cat you could be lucky to have as a companion. Other people grew-up with brothers and sisters. I grew-up with Russ.

It was foremost in my mind that moving to Tallahassee would mean moving away from my closest friend, but it would have been wrong to relocate her away from her home. Just as soon as I was settled-in here and Mom and Ross set out on their trek around the country, Russ came and lived with me. Those two months were the best. It was like old times again.

Russ was diagnosed with kidney disease a while back and we were able to keep her comfortable with antibiotics, pain medication and special food that would accommodate her delicate digestive system. We knew that it was only a matter of time before her kidneys simply stopped working. But she fought it and fought it well for quite some time.

I hope she knows that I would have done anything to have been with her today. Anything. I hope she forgives me for not coming down to visit more often. And today, I hope she remembered all of the good times we had together. I will never forget.