Three weeks ago, I received an invitation from Edelman public relations to attend the grand opening of the new IMAX-branded digital projection theatre at AMC Tallahassee Mall 20. As I was previously unaware of this joint venture and it sounded interesting, I accepted and was reserved two complimentary seats. In selecting Saturday, 19 September 2009, the second day of operations, I was able to obtain tickets to two shows, Space Station (2002) and Cloudy with a Chance of Meatballs (2009), both in IMAX 3D but the former being privately screened before the theatre opened.

Parking next to the entrance and walking into the mall at a yawn-inducing 0745, Omar and I are not completely sure what to expect. I was sent a press release that covered the basics, but I decided to wait until after the screenings to investigate more. As soon as the main gate retracted, we proceeded with the other guests to the converted Theatre 19, received extremely durable 3D glasses—not like those flimsy paper red and blue film ones—and found the seats with "reserved" signs on them.

After a brief introduction by the theatre's general manager, our first taste of the experience came when a few of the trailers were in 3D including the green band rating cards that preceded them. The previews for Where the Wild Things Are, A Christmas Carol and Avatar were all visually impressive and increased our anticipation of the feature presentation. 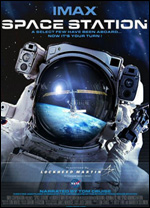 Space Station 3D, presented by NASA and Lockheed Martin, is the story of the International Space Station's history, the people behind it and how international cooperation is essential to its mission and daily operation. Competently narrated by Tom Cruise, the film takes you on an adventure with incredibly awesome and moving imagery encompassing all aspects of the ISS program including the launch, docking and landing of the Space Shuttle, the launch of a crew replacement and cargo rocket from Baikonur Cosmodrome, Kazakhstan, training simulations and, of course, plenty of construction and typical activities aboard the ever-growing station.

To say I was blown away by Space Station is an understatement. The amount of visual detail in this first-ever IMAX 3D space film is astounding. I found myself not always focusing on the action because of the opportunity to look around and notice small details like how the on-board amateur radio is a standard HT model mounted to the bulkhead or that the crew uses ThinkPad notebooks, a logical choice in my professional opinion. And if this was not impressive enough, all the 65 mm filming that took place in orbit 220 miles above Earth was done by the astronauts and cosmonauts, who added special training in 3D camera operations, cinematography and light/sound engineering to their already immense list of duties and responsibilities. 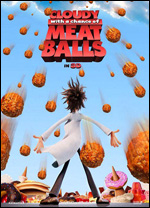 After a brief intermission and trip to the snack bar for an excessively priced beverage, it was on to movie number two. Cloudy with a Chance of Meatballs 3D is a film adaptation of the 1978 children's book of the same title written by Judi Barrett and illustrated by Ron Barrett. The movie tells the story of Flint Lockwood, a young and historically unsuccessful inventor living with his widowed father on the small Atlantic island of Swallow Falls. Wanting to help the community, Lockwood invents a machine to convert water to food that initially functions as designed. After the device is rocketed into the sky by another Flint flub, Swallow Falls begins to experience food-based weather phenomenon that Flint is able to control, leading to the island's re-branding as Chewandswallow, a tourist attraction and cruise ship port for those who like to eat.

Hilarity ensues, moral tales are told and cartoony but professionally-rendered characters seem to reach out into the theatre, all while holding an adult's attention with clever puns and jokes likely to go over the heads of the intended audience. The 2.35:1 presentation is bright with vivid colors, nicely showing off the work of Arnold—Sony Pictures Animation's proprietary software—and IMAX DMR (digital re-mastering). Being unfamiliar with the book, I cannot speak to the similarities or differences between it and the movie (apparently it is quite different), but for a kiddie flick I thoroughly enjoyed it. The well-behaved audience certainly did not hurt. 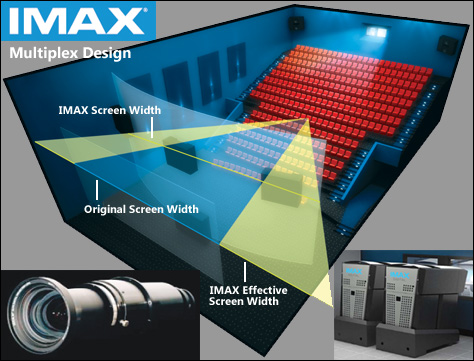 If you have ever been to a classic design IMAX theatre as found at many science and history museums, you are familiar with the basic setup: screens ranging in size from 51′ x 37′ to 117′ x 96′, booming high-quality audio and cinematic offerings different from those typically found at Hollywood movie theatres. This is the template by which the new multiplex design IMAX theatre was created, complete with custom tailored modifications to convert existing, variably sized standard auditoriums.

The multiplex design features IMAX's digital 2D and 3D dual-projection system (~$500,000 each), although all IMAX movies are still filmed on traditional large format 65–75 mm film. As part of IMAX's "immersive patented theatre geometry," the classic screen is replaced by a larger, specially treated and slightly curved one positioned closer to the audience to maximize the field of view. These new screens range in size from 47′ x 24′ to 74′ x 46′ depending on the location. A powerful laser-aligned digital audio system with tuned proportional point source loudspeakers is also installed along with acoustically treated reverberation-cancelling walls. Finally, each location is equipped with a special cleaning system and enough 3D glasses to have one set worn by guests while the other set is being washed.

I was impressed with the overall experience, enjoying both films and the new theatre as a whole, though Space Station wins the top prize for audience immersion, excitement and eliciting a strong emotional response. What can I say? I love the space program.

Since 2003, Tallahassee has enjoyed the classic design IMAX at the Challenger Learning Center. I wondered if the city could support two similar venues like this. IMAX thinks so, telling Mount Sutro by e-mail that "[they] believe the Tallahassee market can support more than one IMAX theatre and ultimately see an increasing interest from consumers in The IMAX Experience." So what will ultimately drive consumers? As I see it, there are five prime factors of consideration.

Film selection — The digital films are interchangeable however, "the number of films and frequency of screenings depends on the film and its distributor," says IMAX. The classic arrangement appears to be maintained when comparing the films currently showing at each Tallahassee IMAX, with the AMC offering one Hollywood movie and the Challenger Learning Center offering three to five educational films in addition to one Hollywood movie. Looking ahead, this does not look to change significantly.

Presentation Size — Depending on what films are offered at each, the opportunity exists to opt for the larger classic IMAX over the multiplex conversion. For Hollywood movies, Challenger is a second-run theatre so films first shown at AMC's IMAX may appear 6–10 weeks later. This is the case with Cloudy with a Chance of Meatballs and the upcoming Where the Wild Things Are. For comparison, AMC's IMAX screen is as wide as the Challenger's is tall.

Availability/Showtimes — AMC is scheduling showtimes five or six times per day. Films at Challenger are shown twice daily, with a third showing sometimes scheduled on Friday and/or Saturday.

Location — Both facilities are centrally located. The Challenger Learning Center at Kleman Plaza, 200 South Duval Street, is only a few minutes away from the Capitol (400 South Monroe Street) on foot, while the AMC Tallahassee Mall 20 sits just three miles north at 2415 North Monroe Street. Parking at the mall is ample, though visitors to Challenger will need to use metered street parking or the Kleman Plaza parking garage, both of which sometimes charge a fee.

Only time will tell which of these factors will prove more important to the Tallahassee community. The results of a recent Nielsen study commissioned by IMAX indicate "there was no meaningful difference in satisfaction levels between classic design and multiplex design IMAX locations." As another indicator of success, IMAX CEO Richard Gelfond points out that "IMAX did 15% of Star Trek's total domestic box office [...] on only 138 screens," up from 12% and 10% for earlier films. In March 2008, IMAX went on to sign a similar deal with Regal Cinemas and announced plans with RACIMEC to expand IMAX's presence in Central and South America.

The success of these efforts is of particular importance to IMAX, who has been working to recover from several financial fallouts. Initially experiencing steady growth in 1995–2000, the company had to re-examine itself when stock prices plummeted in September–October 2000 and again, one year later, when the stock nearly bottomed out ($0.59) on 21 September 2001. Prices eventually improved but continued to fluctuate in the following years. When word spread the company's accounting practices were being questioned by the SEC in August 2006, a 41% loss resulted. The deals of 2007 were thought of as "transformational" by IMAX, part of a strategy designed to help turn things around financially. Understanding I am no economist, recent data suggests the plan is working. The closing price of IMAX stock has been at or above $9.00 forty-two of the past fifty trading days, a milestone considering the last time the stock was above $9.00 was 750 trading days earlier on 09 August 2006, the day before the SEC review was announced.

Even with things seemingly improving for IMAX, the past year has not been without some controversy. In May 2009, moviegoers on the internet reacted to confusion over the anticipated size of the new IMAX screens. Most frequently cited is comedian/actor Aziz Ansari's obscenity-laced diatribe and follow-up, no doubt somewhat embellished for dramatic flair, recounting his trip to see Star Trek. After paying an additional $5.00, Ansari was incensed to find his assigned auditorium was not a classic IMAX but instead the new multiplex design.

In response to the row, IMAX's Gelfond said that despite every indication sales are up, "[they're] going to do something about disclosing information [...] it's just a matter of how and where." Gelfond also stresses that size is not all that matters in IMAX, pointing to the digital re-mastering technology and other features of their "immersive movie experience." All the same, Gelfond reports they have added clarification to their website's theatre locator and will soon provide box offices with a sign or brochure.

I find it implausible people would hear the phrase "IMAX at AMC" and immediately assume a behemoth size screen awaits them. Classic IMAX auditoriums are huge and custom built with the large format in mind; a traditional movie theatre would have to undergo major construction to match. It was in fact the first thing I said to Omar when he asked me about the screening beforehand. "I'm honestly not sure what to expect," I told him. "There's certainly no huge IMAX screen anywhere at AMC 20." On the other hand, I have learned never to assume an audience will comprehend anything not explicitly stated in simple terms. To that end, I do understand those who have asked for more transparency but find false any claims IMAX or AMC misled the public.

In conclusion, I had a great time at AMC's IMAX and plan to return for A Christmas Carol 3D after it opens on 06 November 2009. Regardless of the price or screen size, I am happy to have an additional choice when going to the movies.


Special thanks to Nicholas Wolaver and Evita Broughton of Edelman for the invitation to the screening and arranging my Q&A with IMAX.