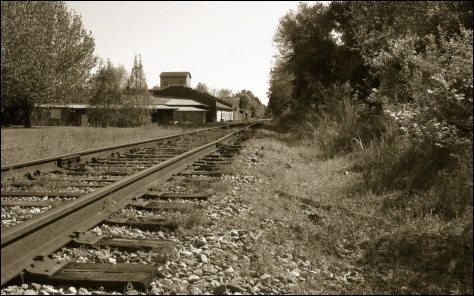 It had been raining lightly for several hours when 0830 EST rolled around and Claire arrived for our trip to Florida Caverns State Park, 3345 Caverns Road, Marianna, Florida. The drive on Interstate 10 was uneventful though there were a few spots of heavy rain. Taking Exit 142, we had a chance to see quaint downtown Marianna before arriving at the park.
See the accompanying photograph gallery.
Like most Florida State Parks there is an entrance fee ($5.00) that allows unlimited entry and exit for the day. Since I had forgotten to take the time zone change into consideration, we were parked and walking up to the visitor center gift shop to purchase cave tour tickets only minutes after 0900 CST. The rain was steady but light enough to walk around and enjoy the nearby wooded area. A sign described this area as a former Native American village, the caves providing clay for pottery and shelter against weather and attack. We purchased our tickets ($8.00), browsed the gift shop and wandered around outside a bit before Park Ranger Frank was along to begin our tour through the cave at 0930 CST. Due to our accidentally perfect timing, Claire and I were the only visitors on the first tour which made for a particularly excellent experience for us. Instead of the typical 45 minute walk-through with twenty-five other people, Frank was able to leisurely take us through the various sections, highlighting formations and providing historical as well as scientific context throughout. Lasting over 60 minutes, the tour was relaxingly paced, thorough and fulfilling. Frank even showed us some of the best places from which to photograph certain formations.

The original 494 acres of park land was purchased by Dr. J.C. Patterson in 1935. He had hoped to develop the area into a state park when the discovery of the caves was made. Florida Caverns was established as Florida's seventh state park on 11 October 1935. Since the Great Depression was taking a toll on the local economy, Patterson envisioned a Luray Caverns style attraction to boost the area and in 1938 development of the Tour Cave and park amenities began. Civilian Conservation Corps (CCC) Camp SP-12 worked for four years as the "gopher gang" on this New Deal era project constructing visitor paths, adding the entrance and exit stairways, installing electric lighting, cutting additional passageways and building the visitor center. The park opened to the public in 1942.

The tour's route can vary due to the rising and falling water table. Claire and I were surprised to learn just how high the water levels can get inside certain cavern rooms, but we were fortunate that the main paths were all clear today. Signs of the past days rain were visible in the drops flowing down stalactites onto stalagmites and in pools forming throughout. After walking back to the visitor center and thanking Frank for the great tour, we took his suggestion and went upstairs to look at the exhibits and watch a few short films about the park's history and ecosystem. Although we were also interested in wandering around the rest of the park, we decided to come back in a few months when it is not cold and raining. On that trip we will hike the trails, check out the river and other activities, not to mention take the cave tour again for fun—and hopefully improved pictures. Ready for lunch, we drove around the section of Marianna we had not yet seen but found no restaurants of interest. Having seen it earlier on the drive in, we decided to check out San Marcos Mexican Grill, 4867 West Side Plaza. It was a nice lunch for a reasonable price. I ate the chile relleno, enchilada, beans and rice ($7.85) and Claire had something similar sans chile relleno. We enjoyed our food and then got back on the road, this time taking local roads instead of the interstate. I had planned to drive US 90 all the way east to Tallahassee, but later realized we were on CR 71 heading south. The route we ended up on took us through Altha, then Ocheesee Landing via CR 274, which turned into CR 286 and eventually deposited us at I-10. At that point it seemed silly to try to find US 90, so we decided to simply head back. Besides, we will have the opportunity to take US 90 when we return to Florida Caverns in a few months.