When I ordered a custom Lenovo ThinkPad W500 (specifications) last month, the estimated ship date was 22 March. I was therefore delighted when on 22 February I received an e-mail indicating my new computer was on its way. The slim box arrived via UPS on 24 February having flown across the ocean from China, spending two days in US Customs along the way. My excitement only grew as I extracted the notebook from its minimalist packaging, connected the battery and fired it up for the first time. My first impression of the factory software install was positive. There was a minimum of third-party applications installed and no pop-ups or prompts to buy or install anything. A temporary partition with recovery media images was included in lieu of a DVD. The only annoyance was having to use Lenovo's clunky application to extract the data before reclaiming the disk space. 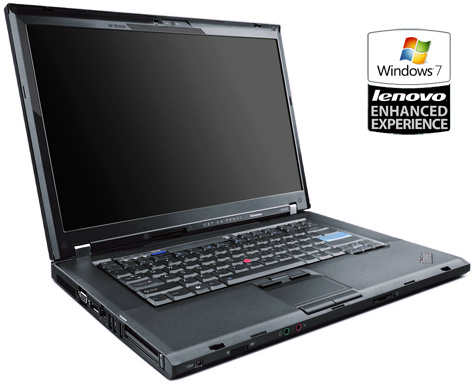 Fortunately, I have no real need for recovery media. I copied the contents of a Windows 7 Professional 64 DVD to my SanDisk Cruzer Micro USB flash drive and booted off it. Windows was installed and operational in eleven minutes. There were a few pieces of hardware that required vendor drivers but that was a simple matter to resolve, especially with Lenovo's System Update 4. Over two weeks later, I continue to be impressed by the performance and stability of my ThinkPad. Applications like Firefox, Photoshop, Outlook, 7-Zip and Google Earth run quickly and smoothly, even when under high processing loads. Furthermore, the speed of the computer is not affected while multiple processes consume system resources. Multitasking, indeed. I have found numerous sites and forums where people share their Windows Experience Index score as computed by the Windows System Assessment Tool. WSAT quantifies the performance and capability of a system's processor, memory, graphics card and hard drive, producing a subscore for each. The lowest of these subscores, which at present range between 1.0 and 7.9, is also the reported base score. These are the results of my assessment test. As you can see, the W500 performed excellently during these tests. I was a bit surprised at the 2D graphics score (5.9), but the Mobile Intel 4 video chipset appears more than adequate in real world use. When graphics performance is required, the ATI Mobility FireGL (6.4) takes over. I was most entertained if not unsurprised by the scorching hard drive performance score (6.7). I definitely made the right decision by selecting the solid state hard drive. Instead of using additional benchmark tools to spit out more figures, I decided I would time the boot and Windows loading sequence. For starters, POST takes four seconds from pushing the power button to when the OS starts to load. With the wireless network and Bluetooth adapters turned on, it took Windows thirty seconds to get to the login screen. With the wireless and Bluetooth turned off, the time was reduced to 17 or 18 seconds. Windows is immediately ready to use after I log in, with all services and start-up applications loaded and running in under eight seconds. The ThinkPad W500 and Windows 7 seem to be a match made in heaven. Only time will tell if the reputation of the ThinkPad line stands, though based on what I have seen thus far I have no reason to doubt it.
Photo Credit: David July Original Photo Credit: Lenovo
7 Comments https://mtsutro.org?p=938