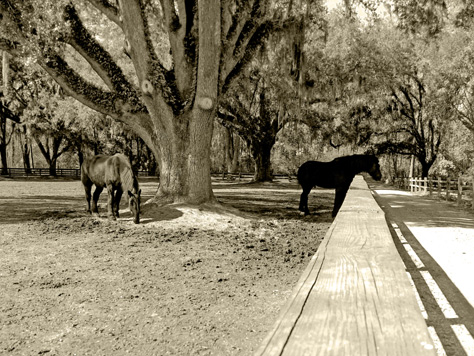 Recently Claire and I decided it was finally time for another day trip adventure. Our past four outings had been a success but we put things on hiatus for her second pregnancy. In early January, she suggested the Pebble Hill Plantation, 1251 US Highway 319 South in nearby Thomasville, Georgia. That sounded good to me, so on Saturday, 12 February at around 0945 we were on our way, cinnamon scones in hand, to the 3,000-acre facility. We arrived shortly after they opened and I could tell that the sunlight and temperature would be perfect for walking around and taking pictures. The main drive from the highway is a cozy, canopy road that winds around the structures to a parking lot at the Stable Complex (1928) and visitor center. Upon our arrival inside, the gentleman working the register greeted us and explained the fees. We each paid the basic $5 grounds access fee and added the main house tour for $10.
View the entire Pebble Hill Plantation photo set.

After looking at some of the historical artifacts on display, we were ushered into an adjoining room to watch a short film about the plantation and the people who operated it during its 153 year history (1825–1978) before opening as a museum in October 1983. This room contained a vintage American Sterilizer Co. (AMSCO) of Erie, Pennsylvania safe-sized walk-in sterilizer, something that I had never seen before. After the film, it was time to meet the docent for our tour of the main house (1914/1936). Unfortunately, photography is prohibited on the house tour so I do not have any images from inside (see PHP Photo Galleries). The tour itself was interesting and covered the history of the building and the legacy of strong female mistresses who obviously ran the show back in the day. The house contains an absolute plethora of objects from the 19th and early 20th century including various equine artworks and awards, 33 John James Audubon lithographs and a photograph of President Dwight D. Eisenhower on the property during one of several visits here with his wife. At the end of the hour-long tour, we exited the main house and were now free to roam the grounds at our leisure and take photographs. We wandered from the trellis to Carriage Circle and explored the Tennis Court, Family Cemetery (1827) and Family Cemetery addition (1932). Moving south, we saw the Swimming Pool (1920), Bath House (1922), Arbor Tunnel and Maze. Moving around the house from the east wing to the front porch and eventually the west wing guest entrance, we next went to some of the other structures on the property. The oldest building at Pebble Hill is the Log Cabin School (1901), which has on its roof a neat statue of a cat sitting watch. Inside the schoolroom and playroom are the furniture and toys of the various children who lived here. It also contains a vintage Fire-Gun No. 1 fire extinguisher by American-LaFrance Foamite Corporation of Elmira, New York. Moving on, we saw the Overflow Cottage (1916/17), Kitchen Garden and Shed (1917) and The Waldorf (1929). The main floor of The Waldorf, built as the plantation laundry complete with living quarters, kitchen and dining room, houses some additional vintage equipment of interest. I enjoyed the "Wheel to Fire" mobile firefighting apparatus by O.J. Childs Co. of Utica, New York, the Tip Top Value cast iron stove and range (~1905–1920) by Southern Stove Works, Inc. of Richmond, Virginia and The Great Majestic cast iron stove and range (~1920) by Majestic Manufacturing Co. of St. Louis, Missouri. The Dog Hospital (1929) felt eerie and abandoned in the way things were arranged. It was almost as if a dog was going to appear and run up to us. Incidentally, I managed to capture one of my favorite pictures from the trip here. Next door, we passed the Firehouse (1929) and Nurse's Station (1929) before walking the main road around the horse paddock and Stable Complex. Twelve horses and mules live on the plantation today and several of them came up to us once we got closer. After visiting with a few of the curious horses, we walked inside through the Stable Complex to see the horse and cow barns, Tack Room, Dairy and Carriage Room. Already at the courtyard near the exit and having spent two hours wandering around, we decided that it was time for lunch and that the other buildings on-site could wait for another time. We left the plantation and continued north on US 319 into downtown Thomasville. After parking on the street, we walked up and down Broad Street looking for a good place to eat, finally settling on Jonah's Fish & Grits, 109 East Jackson Street. The restaurant contains a bit of religious artwork and some text on the menu about their namesake, but it was not intrusive. Claire ordered the Shrimp and Grits ($7.50) and I got the Fish and Chips ($7.80) with a cup of Grouper Chowder ($3.80), all of which were quite delicious. We returned to Claire's house where her three-year-old Elliot wanted to spend some time with me. After a thorough review of his favorite Transformers and Toy Story action figures, Elliot decided it was time to color. Armed with some of his Sesame Street coloring books, we sat at the dining room table and colored together for twenty or thirty minutes. It was an interesting experience for me, not being particularly comfortable with children, but one I think we both enjoyed.