RSS Feeds FeedBurner feeds will be discontinued today. They should redirect from Google for thirty days, but you should update your subscriptions immediately. The shortcut links below are to the new locally hosted locations.

Linkage The Linkage feed through Google Reader will be discontinued today. Future Linkage will appear on Twitter.

I have always preferred to run everything on this site locally, without relying on third-party services. On a few occasions in 2009, I lightened up on this policy and expanded a few things outside my control. Most notably, I migrated the photograph gallery to Flickr, started using Google Reader to publish shared links of interest ("Linkage") and began providing RSS feeds through FeedBurner. Overall, I have been pleased enough with these arrangements. Flickr While I continue to worry about the future of Flickr under Yahoo!, my experience there has been excellent. Although my primary motive was to reduce the overhead in managing the gallery and costs of hosting, the unanticipated result has been the far-wider audience my pictures have received worldwide. I am no fan of the JavaScript or Flash only options for displaying recent uploads. Making mass edits is still far more cumbersome now; previously I could download the database, make batch updates and upload. I was also so frustrated by Flickr's outdated built-in Creative Commons license that I now just link to the license here. But so long as the service remains essentially the same, I will continue to pay for a Pro subscription and keep my images on Flickr. Google Reader Since I was already using Google Reader as my RSS aggregator, using its sharing feature to publish Linkage was a logical progression. I enjoyed the fact that this content could be viewed as a list in the sidebar, on a stand-alone page with images and via RSS. Yesterday I learned of Google's plans to "clean things up" as they said, referring to the discontinuation of sharing, following and friending inside Reader. Instead, new Google+ integration is designed to take over. By forcing this change, the usefulness of this product for me has just gone to zero. Mozilla Thunderbird, my first choice as an alternative RSS reader, has so far proven to meet my needs. I did not find any add-ons to share feeds from Thunderbird, so I will now be posting Linkage on Twitter. This works immediately, the only issue being that my script does not yet interpret the newish Twitter shortlinks (e.g. http://t.co/AkgyGG0v). With that fixed, I think this will work out fine. UPDATE: this issue has been resolved. FeedBurner Finally, I have decided that the cons outweigh the pros with regard to using FeedBurner. I had originally sought the compatibility features and web front-end, but I find that my site's feeds are often delayed for no reason. RSS is ubiquitous and while Chrome still mysteriously has no internal means of displaying feeds, the other four major browsers now do. I hate that it may be a hassle for those two or three subscribers to update their feed software, but think it is better to cut this cord before I have an even more compelling reason to do so.
Photo Credit: David July
0 Comments https://mtsutro.org?p=1005 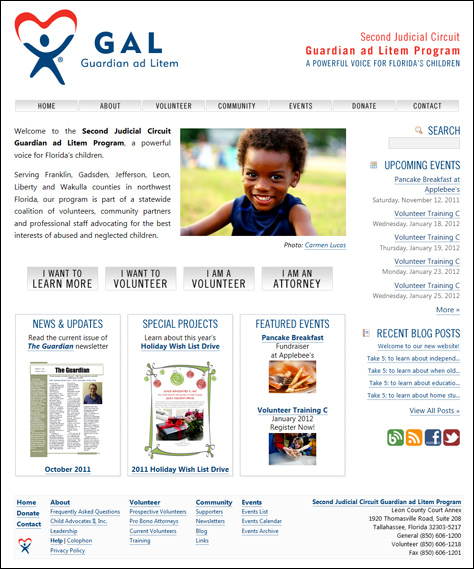 For the past few months, I have been developing a new website for the Second Judicial Circuit Guardian ad Litem Program. Serving Franklin, Gadsden, Jefferson, Leon, Liberty and Wakulla counties in northwest Florida, the program is part of a statewide coalition of volunteers, community partners and professional staff. Guardians ad litem are court-appointed volunteers who protect the rights of and advocate for the best interests of a child involved in a court proceeding, frequently as a result of alleged abuse or neglect. I could not be working pro bono for a nicer group of people or a better organization. The work the program does is important and so are their fundraising, recruitment and training efforts. My greatest hope is that the new website will help the program better meet their mission, improve overall efficiency when dealing with volunteers and the public, more efficiently provide information and increase the program's online profile. The people I have met are extremely friendly and a pleasure to work with, a trait that should not be uncommon but my experience says differently (see Clients From Hell). Special thanks to Deborah Moore, Leigh Merritt and Stacey Burns for making the entire process fun and painless. It has been a challenging but extremely fun project. With my current day job workload—among other duties, I am an assistant project manager on the massive data center consolidation project for the Florida Department of Transportation—I have been working on the website nearly every weeknight and weekend. Although it has been an exhausting time, getting this website built and online as quickly as possible has been a driving force. In addition to significantly improving my PHP programming, WordPress theme development and regular expression skills, this project has rekindled in me a powerful urge to work for good. I last felt this way when I was running a small law office ten years ago. Going home each day with the knowledge that my day's work made a tangible difference in someone's life was a wonderful reward. In the near future, I shall investigate what opportunities may be available for me at not-for-profit organizations. Because you never know—and I would like to have that feeling regularly again. Please take a few moments to check out the website and learn about the program. I would love to hear any feedback you may have.
Photo Credit: gal2.org
2 Comments https://mtsutro.org?p=1003