I did not realize earlier today that the heavy rains were going to subside so quickly, otherwise I may very well have waited. In hindsight, I am glad that I did not and instead decided to use a small break in the storm to take a quick trip to the store. It was about 1400 and seeing on radar that the pause would be brief, I threw on a T-shirt and jeans, grabbed my wallet and keys and swiftly headed out.

After locking the door and climbing down only one or two stairs, I stopped in my tracks and stared ahead. Near the foot of the stairs, walking the sidewalk adjacent to the parking lot was a medium-sized turtle.

View the entire Turtle Encounter album in the Gallery 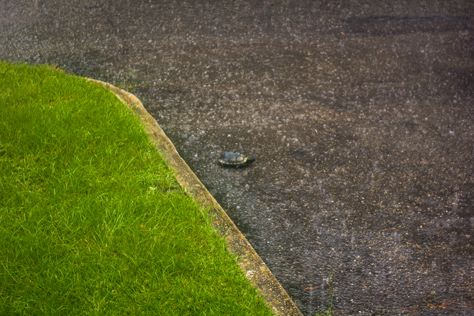 Upon seeing me, it also stopped and seemed to look up at me. Trip to the store and rain break be damned; I ran back up, quickly unlocked my door and went in to retrieve my camera.

With my hands moving as quickly as possible—think: Data assembling the Temple of Kural-Hanesh model—I grabbed my Lowepro Nova 170 AW shoulder bag and put the Sigma 18-50mm f/2.8-4.5 lens on my Canon EOS 550D/Rebel T2i. When I returned outside, the turtle had made his way into onto the asphalt. 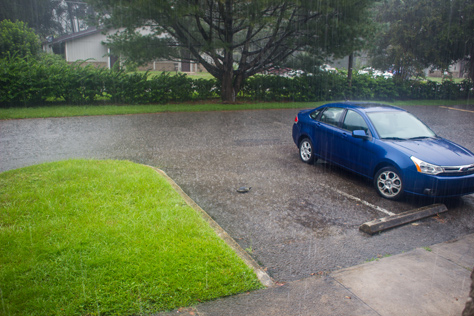 The rain was picking up, I was paranoid about getting my equipment wet and the turtle was moving away from where I could safely stand. The lens was too short. I had apparently been moving faster than my brain before, so I ran back upstairs to switch lenses. I put on the Canon EF-S 55-250mm f/4-5.6 and returned only to find that the turtle had retreated out of view under my car.

When I was purchasing the camera earlier this year, Mom cautioned me that having too many lenses could make things more difficult in the field. Today's turtle encounter provides two lessons in that vein. First, always default to the longest lens when photographing wildlife. Second, always bring the Lowepro along no matter how close it may seem. 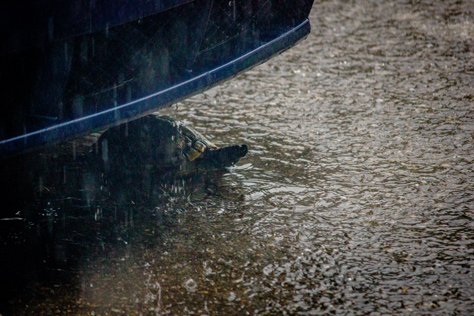 As the rain continued to increase in intensity and my view of the turtle diminished, I returned inside to see things from my guest room window. After a few minutes, the turtle started making his way through the lot against the strong flow of water. Emerging from the flow, the turtle stopped right in the middle of the road.

Knowing that people frequently drive too quickly through here, I feared that the turtle might meet an unfortunate end. I decided to intervene immediately. The last time I moved a turtle, it was a much larger creature on a much larger roadway. My only hope here was that it would go quietly, unlike the previous experience where the turtle was pissed and tried to bite me. 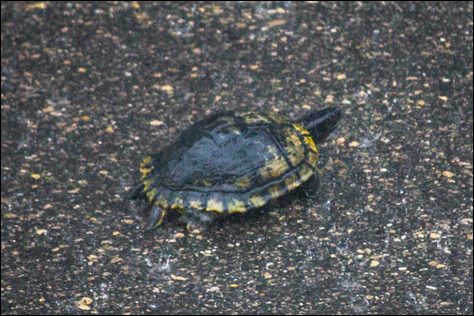 I approached the turtle from behind and told it that I was there to help. It did not react much when I picked it up, slowly retracting its limbs and then its head somewhat. It was also much lighter than I expected.

Already completely soaked, I did not stick around after placing the turtle in an adjacent grassy area and ran back upstairs. The turtle looked around for a few moments and then walked into the bushes, once again out of sight. 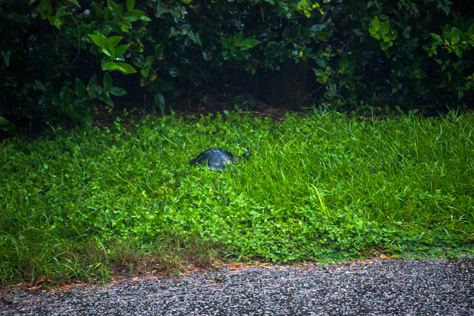 After the rain stopped, I returned outside to try to find it again but did not. Checking periodically throughout the afternoon, the turtle is nowhere to be found. With all of the wooded park space nearby, it hopefully made its way to some safe place far away from traffic.