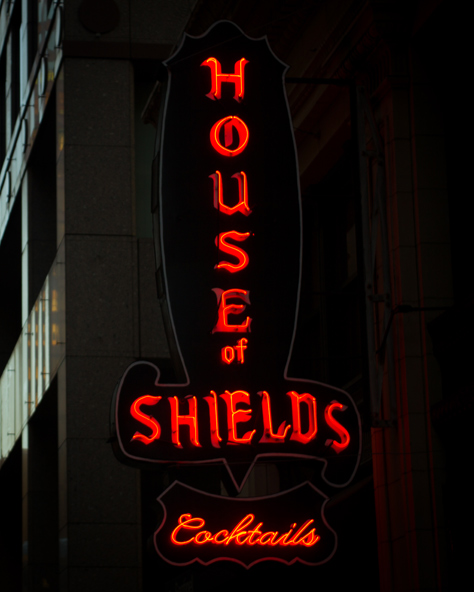 The red neon sign of The House of Shields saloon, which also says "cocktails" instead of "live music" now.

Back in 2009, I had an opportunity to check out a saloon called The House of Shields at 39 New Montgomery Street. An interesting place with wonderfully old decor, brass chandeliers, illuminated sconces and a huge wooden bar, much mystery and apocryphalness surround The House of Shields.

Most accounts state that the saloon first opened its doors in 1908, although others say 1910. The building that contains The House of Shields, the Sharon Building, was built in 1912 leading to further confusion. It operated as a gentlemen's club and as such, prostitutes were the only women permitted inside until 1972 or 1976.

View the entire The House of Shields album in the Gallery

Another popular story tells the tale of how the saloon acquired its iconic wooden bar early in its existence. As the story goes, the ritzy Palace Hotel across the street had purchased the bar for their new Pied Piper room.

The other main feature of that space was the Maxfield Parrish painting commissioned for behind the bar. Upon discovering that the painting was too large to support the grand bar, The House of Shields' owner suggested it be moved to his establishment.

During the prohibition of alcohol from 1920 to 1933, the House of Shields ran a speakeasy in the basement complete with a secret underground tunnel to the Palace Hotel. Untold numbers of hotel guests passed through that tunnel in order to drink illegally, possibly including U.S. President Warren G. Harding.

The official account holds that Harding died in the presidential suite of the Palace Hotel, but others claim that he actually had a heart attack in the speakeasy while getting drunk with his cronies. They say he was immediately rushed back to the suite to make it appear as if it happened there. 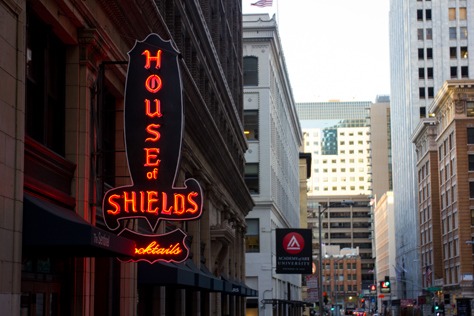 In January 2010, news came that the bar would be closing in June after over one-hundred years of business. Fortunately, Dennis Leary, owner of The Sentinel sandwich shop next door, had his eye on the saloon and wanted to restore it to its former glory.

Leary purchased the bar and during an approximately six-month period, completely cleaned, refurbished and restored it. The House of Shields reopened on 16 December 2010.

When Marc and I drove down New Montgomery Street on 26 January 2013, we immediately saw that the metered street parking spot right at The House of Shields' front door was available. This was only one example of the amazing parking luck I had during this trip.

We were early enough to beat the after-work crowd known to frequent the bar and were able to sit in one of the small booths along the windows. I particularly appreciate one of the bar's longtime policies: no televisions. 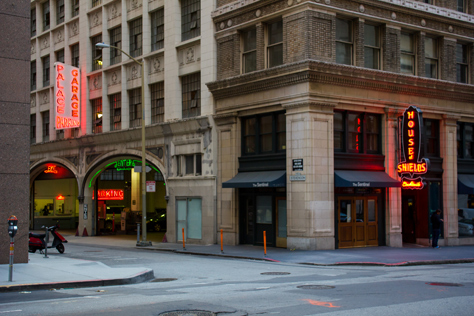 It was great to see all the immaculate detailing in the decor that had been covered in dirt and smoke for so many years. The statues, the bar and the floor tiling, everything looks great.

I was also pleased to see that the humongous urinal in the men's room is still present. It is so large that when standing at it, you feel like it may just hug you.

In the excitement of the trip, I knew it was likely that I would get home to my photographs and wish that I had done something differently. In this case, I neglected to take any photographs of the interior.

My love of neon signs fortunately prevented a complete lapse though, as evidenced by the exterior shots I did capture. Film buffs will recognize the sign and street corner from the final scene in David Fincher's 1997 thriller The Game.