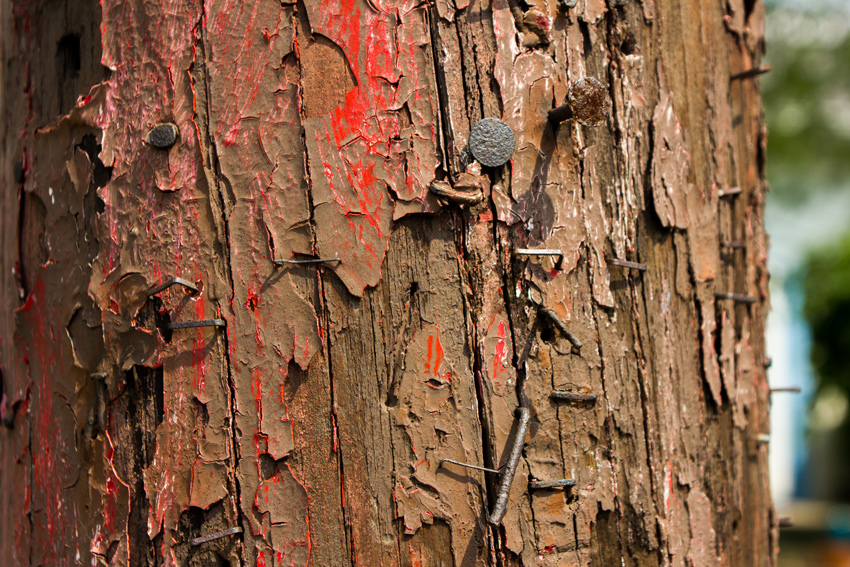 Bits of red paint among rusted nails and staples are all that remain on a wooden telephone pole from days past when a fire alarm box was mounted here.

part of the Tonawanda album

Walking down the sidewalk where I first learned to ride a bicycle decades earlier, my gaze catches an object across the street. Only a moment after looking at it, a wooden telephone pole that is in no way remarkable, I am filled with that wonderful sensation of a memory being churned up from the mind's recesses. Synapses blazing, I walk closer to investigate.

Staring at the telephone pole, I see rusting nails and staples protruding from the wood as well as areas of fading red paint. The thing that I remembered is no longer present, but the flecks of red at least confirm that I am recalling things correctly. I am disappointed but not surprised, as the proliferation of newer technologies has caused the removal of fire alarm boxes from cities and towns across Western New York and nationwide.

Conceived of in Boston, Massachussets by Dr. William Channing in 1839 and built with partner Professor Moses G. Farmer of Salem, Massachussets, the fire alarm telegraph system was the first to pinpoint and communicate fire alarms in a practical manner. When the handle inside a fire alarm box was pulled, the device transmitted a Morse code style identifier that could be used by the fire department to locate the call or broadcast via diaphone.

Beyond their ease of use and necessity in the days before people had telephones — nevermind 4G smartphones with GPS — the boxes were also used in the advanced planning of fire response in that fire crews could pre-assign certain apparatus and personnel to respond to calls from specific alarm boxes based on the number and type of buildings nearby. 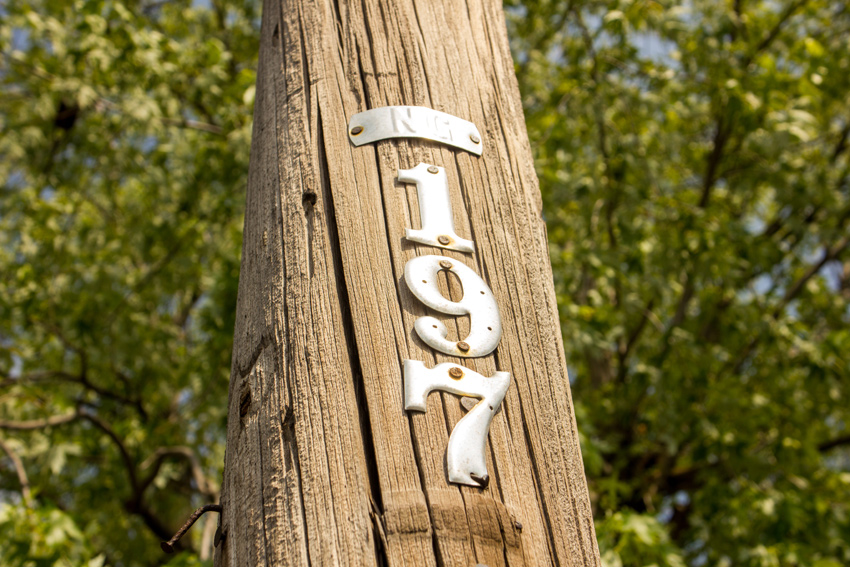 The fire alarm box from my childhood was removed sometime prior to September 2008, although I was not able to pinpoint the exact time without contacting the City of Tonawanda. The Buffalo News ran an article entitled "WNY communities are saying goodbye to their fire alarm boxes" on Monday, 25 February 2008 about how "the Village of Lancaster will likely become one of the last suburban municipalities to bid a fond goodbye to an American icon: the street corner fire alarm box." Their system east of Buffalo — about sixteen miles from the City of Tonawanda by car — was "officially disbanded in March 2008," the fire alarm street boxes subsequently bagged with black bin liners and then removed from telephone poles.

Indeed, the Buffalo News article also notes that the Village of Depew, whose system was first activated in 1894, was to "become the sole remaining suburban holdout in Erie County relying on a fully functioning street box alarm system" after the neighboring Village of Lancaster removed theirs in March 2008. Most of the City of Buffalo's alarm boxes have been similarly dismantled, but a few were still reported to exist in February 2008.

"It's hard to let go, because it's sort of a tradition — they give you a warm, comfortable feeling. I can remember eyeing my street corner fire alarm as a boy and wondering what it would be like to pull that lever inside."

After Channing and Farmer invented the fire alarm telegraph system, it would go on to have an interesting history. In lieu of my own write up, I am instead presenting a historical acccount in the form of a three-page May 1902 article from Municipal Journal and Engineer magazine. Not only is this great because of its age, but more modern sources have less detailed and incorrect information. The pages are presented inline below; you can also download larger images and the entire volume of 286+ pages. 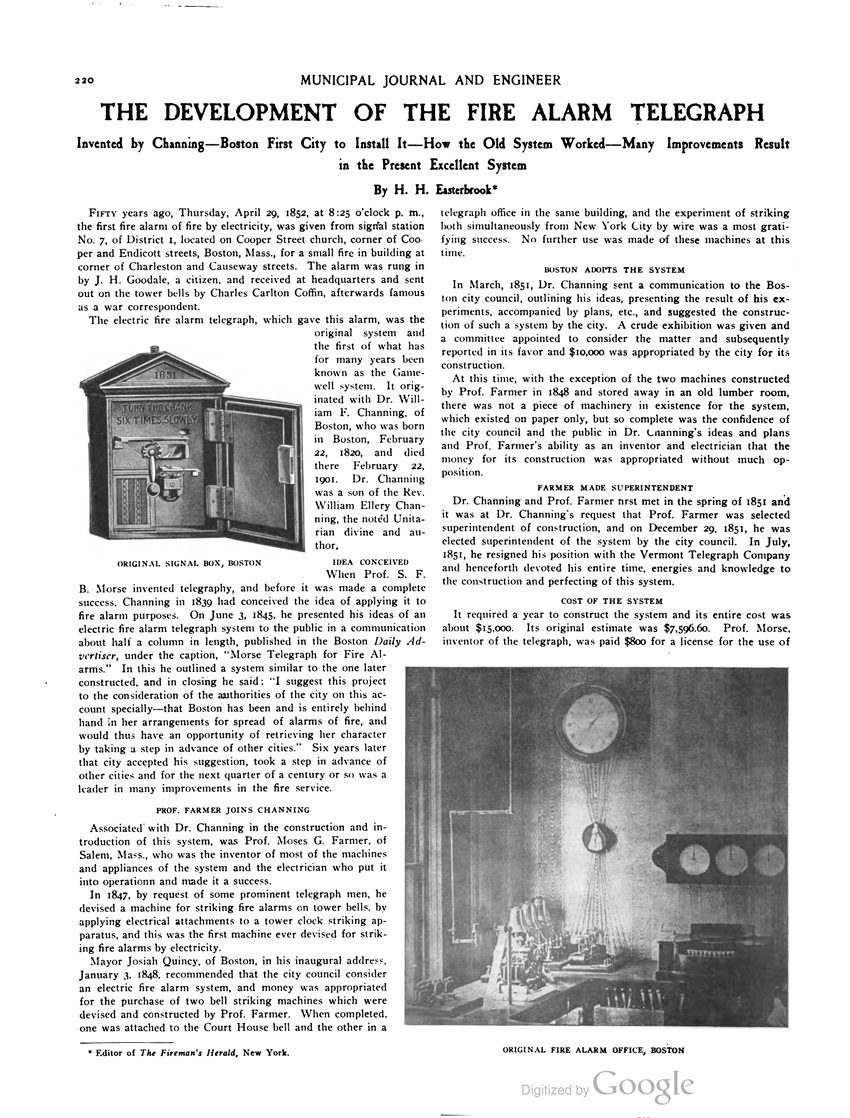 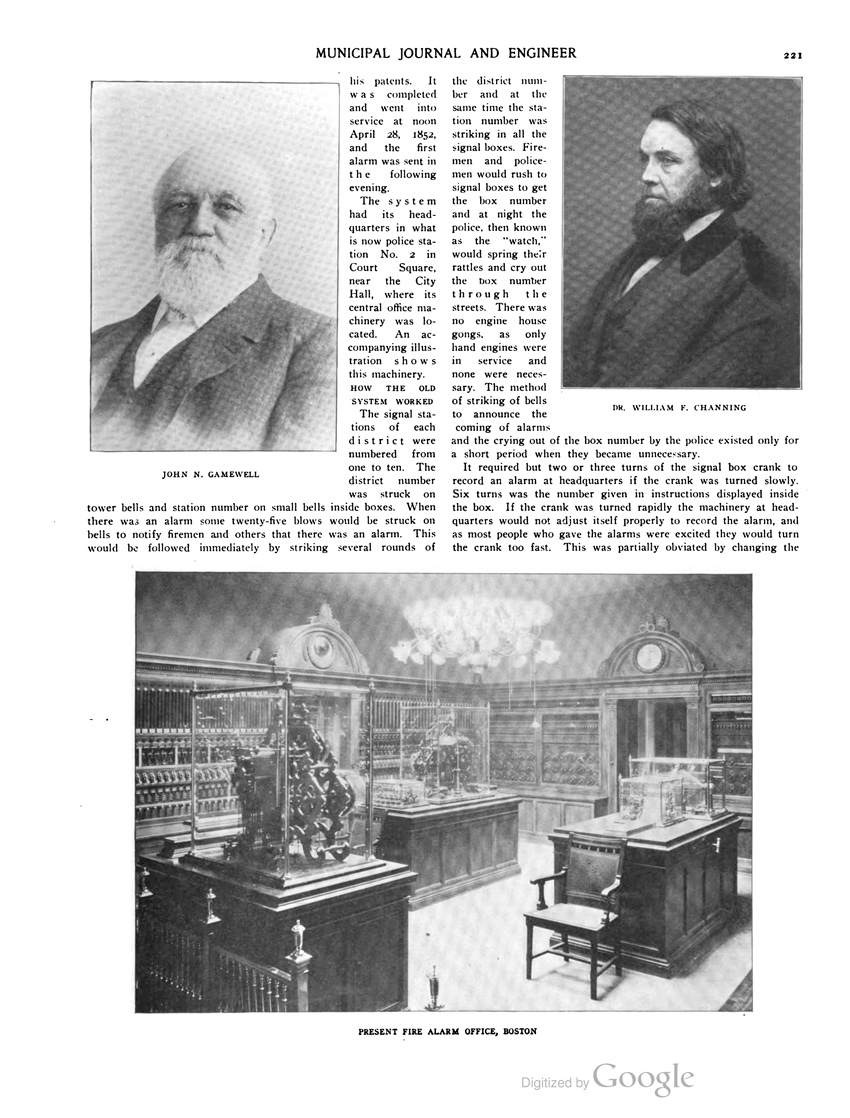 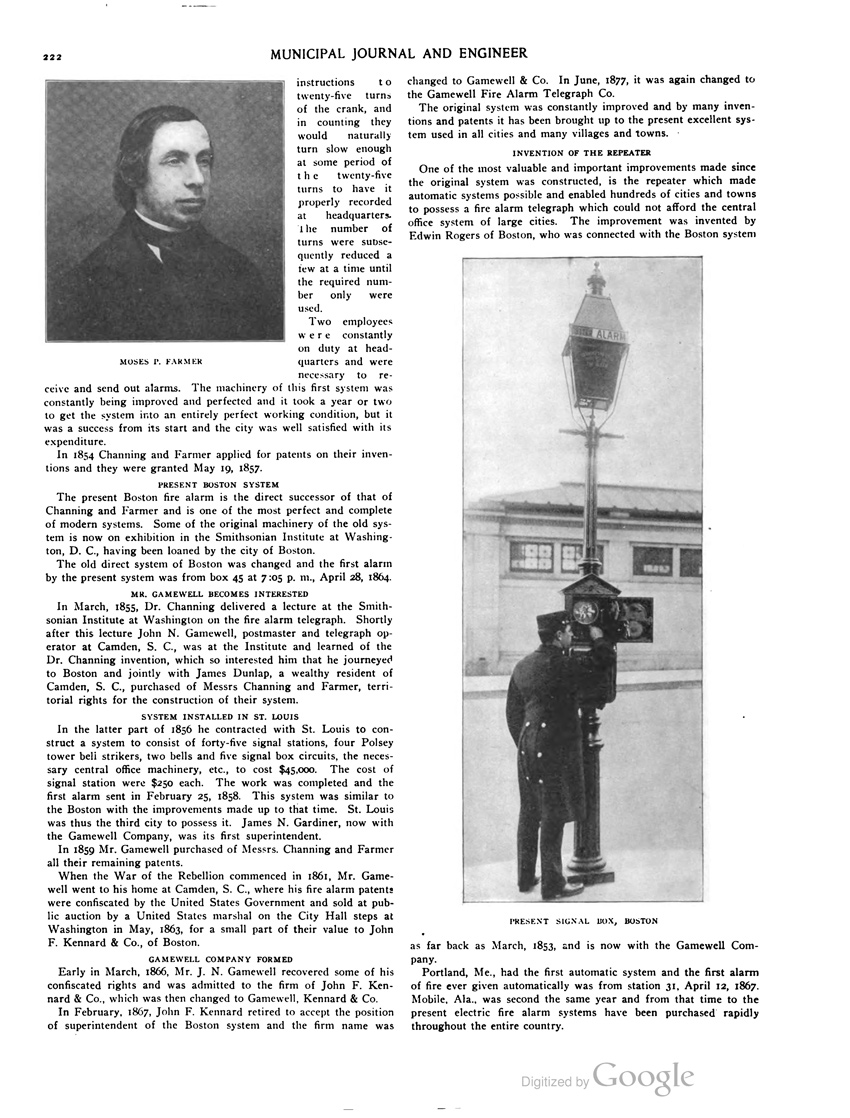