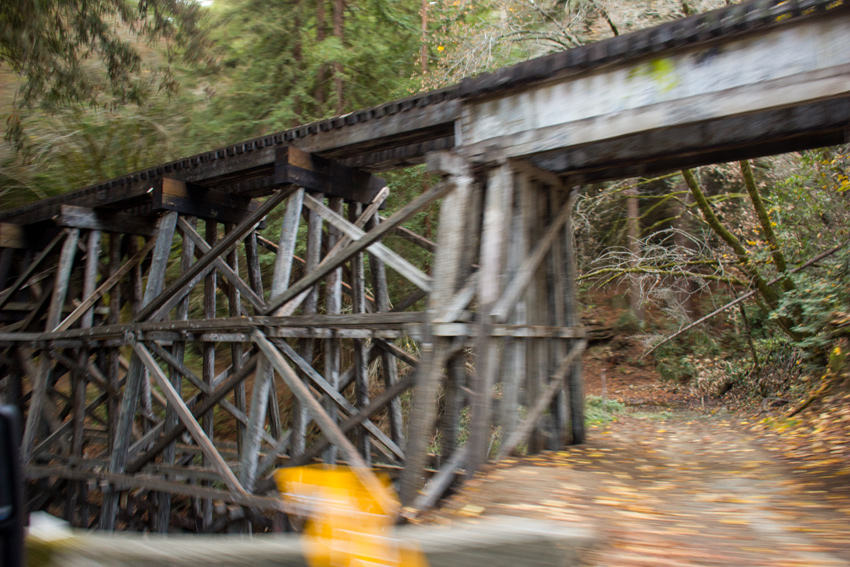 part of the Santa Cruz album

While visiting Santa Cruz during my family Thanksgiving in 2015, we stayed about seven miles north at Smithwoods RV Park on State Route 9 in Felton, California. Nestled in the woods adjacent to Henry Cowell Redwoods State Park, this was an ideal location. The twenty-minute trip from Santa Cruz to Felton is a beautiful one, as the winding two-lane State Route 9 traverses a hilly and forested terrain with several vistas.

I would have several opportunities to travel up and down State Road 9 during my visit. I was too busy navigating on the first trip up to Smithwoods to be taking photographs, but I did spot a wooden railroad trestle that I knew I wanted to capture when driving back to the city shortly thereafter. The photograph above is the result — an imperfect but surprisingly decent image with some well-placed motion blur, shot from the back passenger window as we drove south.

We were not travelling very fast but the trestle passed quickly nonetheless. I did manage to pivot aft and shoot one additional frame six seconds after the first. Most surprisingly, I somehow managed to get the trestle (mostly) in focus. I think that the blur of the plants on the roadside cliff to the left make it look as if we are going to warp. 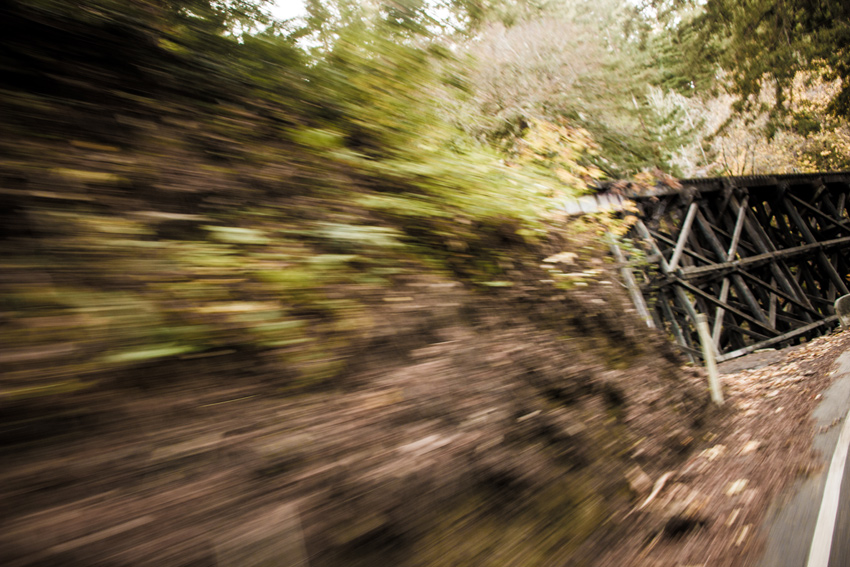 Thanks to the informative Santa Cruz Trains website by Derek R. Whaley, I was able to pinpoint and identify the structure as the Shady Gulch Trestle (c. 1895–1905) and learn a few things about its history.

An original trestle and railroad bridge was "built around 1875 by the Santa Cruz and Felton Railroad to cross a small ravine." This location was proximate to the California Powder Works manufacturing facility as well as a Rincon paper mill. The original trestle was also built over Eben Bennett's toll road, an early route from Santa Cruz to Felton.

Around the turn of the twentieth century, "the bridge was replaced with a broad-gauged trestle that appeared amazingly similar in style to the earlier trestle." It remains in service today, although crossings are far less frequent than in the past. Santa Cruz, Big Trees and Pacific Railway, offering seasonal round-trip service between Felton and the Santa Cruz Beach Boardwalk, is one example of a train that crosses the Shady Gulch Trestle.

In addition to Whaley's page, I found an awesome 2014 photograph by Elrond Lawrence of the trestle with a train on it and four photographs at Blackstone Falls Rail Photos — one from 1937 including a train and three trestle-only from 2003.

There was one last opportunity for me to photograph the trestle on the final day of my visit. As before, I would have to make due with another in-motion attempt, this time with some forethought. Approaching the trestle from the south, I would only have a few seconds to compose, focus and take the picture.

I readied myself just before we rounded the last corner and the trestle came into view. Considering that I was in the backseat of a moving vehicle and shooting through a windshield, I think that it came out fairly well. However, the next time I find myself in the area, I do hope to have a chance to stop and get a close up and stationary look at the Shady Gulch Trestle. 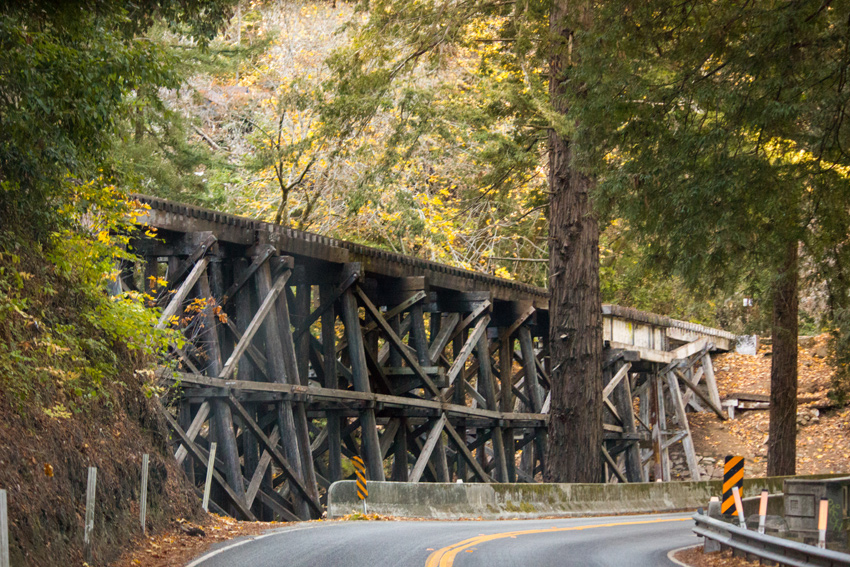 David July
"The Sun Will Rise And Set Tomorrow" https://mtsutro.org?p=1203