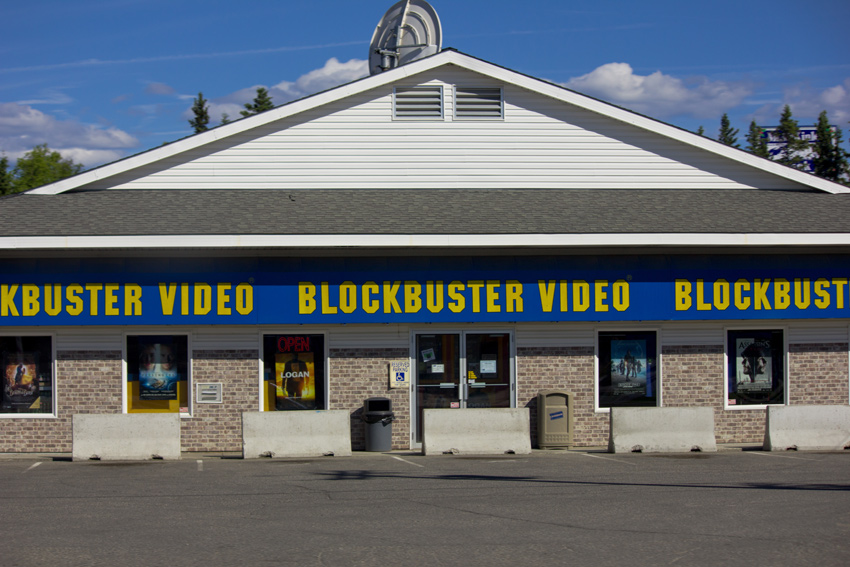 Did you know that Blockbuster Video still has retail locations in business? I did not until Wednesday, 14 June 2017, when I spotted one in Fairbanks and another in nearby North Pole, Alaska. I would pass a third location in Wasilla a few days later. Although there are many unique and wonderful aspects to the forty-ninth state, the sight of Blockbuster Video stores was unanticipated and rather surprising. Knowing that I would learn more after the trip, I hypothesized that high-speed internet must not be widely available or is still too expensive for Alaskans to switch to streaming services.

Even when they were ubiquitous, I never cared for Blockbuster Video. My first experience with them was in the early 1990s after they took over a local video store in Altamonte Springs, Florida where I used to rent movies on VHS cassette as well as the occasional Nintendo game. I recall Blockbuster trying to overcharge by adding late fees for items previously returned on time, that is when they actually had the titles I wanted in stock.

As it turns out, I saw half of the Blockbuster stores still open today in Alaska. In addition to the ones in Fairbanks, North Pole and Wasilla, there are also two stores in Anchorage plus one in Soldotna near Kenai. The six Alaska locations are not the only surviving ones, however; there are also three stores in Oregon and one in Texas for a total of ten nationwide. Despite their continued operation, Blockbuster and other independently-owned video stores in Alaska have not been completely immune to the shifts in how people consume film and television media.

When Dish Network, the satellite television provider that acquired Blockbuster in 2011, announced the closure of the final 300 remaining corporate stores on Wednesday, 06 November 2013, there were thirteen locations in Alaska staying open. As the Midtown Anchorage location prepared to close in September 2016, it was noted that Kenai's store closed earlier in 2016 and that "other locations in Juneau, Kodiak and Anchorage have also gone in recent years." Most recently, the store in Eagle River northeast of Anchorage closed in July 2017. 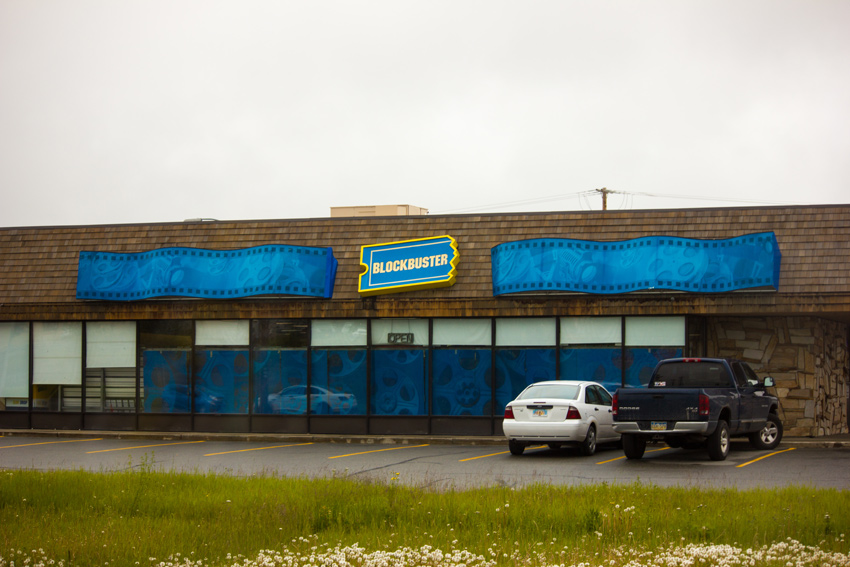 Returning to my hypothesis, articles published on Wednesday, 26 April 2017 and Sunday, 30 July 2017 support my original conclusion — "internet service is substantially more expensive than in most states, since most data packages are not unlimited." There are additional contributory factors, however.

First, Alaska has a strong but small retail market. Even as stores in the lower forty-eight close, locations in Alaska frequently remain open. Reasons cited include a lack of retail supersaturation, fewer competing businesses and the high cost (and long wait times) for shipping items purchased online to Alaska addresses. Second, many Alaskans have higher median household incomes than in other states. Third, Alaskans maintain a desire to use retail outings to socialize in a place where winter is very cold, dark and long.

Even as their website proclaims that "Blockbuster stores may be a thing of the past," there continues to be a market in Alaska for the traditional way of browsing the rows and rows of titles and renting videos for home entertainment. With the closures over the past two years alone, Blockbuster's future and that of local video retailers is far from certain in the last frontier. Even if broadband internet becomes more affordable, there is still the social aspect to help keep the businesses afloat. I may feel no nostalgia for Blockbuster, but the closure of the remaining video stores in Alaska will signal the unfortunate conclusion of an era.