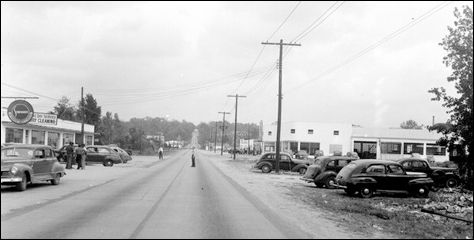 Driving late at night is always an activity I particularly enjoy. It expanded my horizons and brought to me to new places while living in Orlando, allowed me to learn the streets and neighbourhoods of Jacksonville, Florida in less than four months and continues to provide me with a stress relief that is unmatched.

When I moved to Tallahassee, I had always envisioned spending my evenings alone, driving around the area. But when I got here a combination of my almost instantaneous induction into two social circles and the high price of gasoline prevented that idea from ever taking form. Instead the most driving I have done resulted from working across town from my apartment and regularly attending my friend's flag football games at Tom Brown and James Messier Park. It was while driving to Tom Brown Field for the first time I saw The Capitol Building in my rearview mirror, the sun setting on it and the moon rising next to it. From the Post Office where my box lives, I can see straight up College Avenue to Westcott Plaza.

There was only one occasion where I did venture off into the night without a particular destination in mind. I only knew I was hungry for something different and I would not know what that was exactly until I saw it. Turns out that "something" was Village Pizza off Thomasville Road; cold beer, tasty stromboli and reasonably priced.

Interestingly enough, that little trip was the last time I drove on Interstate-10. Coming from a city where interstate, toll and other freeways are the primary arteries of transportation, I have very nicely acclimated to the fact that I-10 is simply a gateway to the rest of the country. The next time I anticipate driving on I-10 is when I head back to Orlando for several days sometime at the end of December. I laugh aloud just thinking about it.

I finally decided the other night that it had been too long since I drove for driving's sake, so I took off in my car with the windows down, the sunroof open and the heat blowing. It was an absolutely perfect night for a drive around town, the temperatures plummeting from the fifties down to eventual record lows. As I turned onto Gaines, I was immediately enamored by the fluorescent office lights of the Department of Education's Ralph Turlington Building. Those lights are so terrible when you are in the office they illuminate, but when viewed from the outside in the middle of the night, that unusual building seems to stand as the guardian of downtown, the lights bringing the structure together. Bringing it to life.

After making that trek I decided to drive on the southern segment of Capital Circle, past the Tallahassee Regional Airport (KTLH) and back around and up to my office building near Apalachee and Capital Circle. I had to test if my newly activated access badge was functioning after-hours. From there, I continued up to Miccosukee and took what I call the "back way" home from there.

In all, it was an experience I am looking forward to repeating. Who knows? Maybe tonight's foggy slumber into the high fifties will provide a chance to see something new and wonderful. Either way, I leave you with a present-day look at South Monroe to compare with its 1946 counterpart above.

Photo Credit: Forrest Granger, State Library and Archives of Florida
1 Comment https://mtsutro.org?p=344
The apartment that I live in is located on the "college" side of town, meaning that it is in western Tallahassee in proximity to Florida State University (FSU), historically black1 Florida Agricultural and Mechanical University (FAMU) and Tallahassee Community College (TCC). Originally when I was moving to town, I had selected an apartment complex on the east side of town as being further away from campus life was a strong selling point. But when the "Palms of Apalachee" turned out to be the perfect exemplification of the type of place I would never want to live, I decided to part with my application fee and deposit and move on.

That decision, as it turns out, was one of the best ones I have ever made. My small apartment complex while near to the heart of university life in Tallahassee, remains a quiet, wooded and perfectly situated community.

After spending the Sunday before Labour Day at Brothers with my friend Pam, I asked her about the place — how much is rent, are the neighbouring tenants rowdy college kids and most importantly, are there any openings? Just under one hour after that conversation, I had verbally contracted a one-year lease on a two bedroom, one bathroom unit in a building adjacent to Pam.

Most people think my balcony is the best single stand-out attribute of my place. It is quite large and private, a result of the large oak tree that sits between my building and Pam's. That tree was a selling point, itself. My electricity bills have been far lower than I expected.

I have already had work done on the place to improve some of the features, such as a new bathroom sink with a counter and top to follow in the near future. The dishwasher does not work so well, but I do not even use it. One person in an apartment does make for a practical dishwasher user. I cannot use dishes fast enough to justify not having access to dishes in the washer for weeks at a time. And given things will start to grow and fester in there if the stuff is not cleaned ahead of time, I have elected to just hand wash everything.

I have had my windows open for several weeks now, with the exception of a few nights where Tallahassee experienced record lows (~34° F). The gentle breeze that makes it way through the unit is refreshing. Popular Ocala Road does add to the noise factor I was trying to avoid, but at least it is not bass-pounding music and obnoxious frat boy parties. Besides, my bedroom is on the inside of the apartment and away from the street side and I can hardly hear the road when the doors and windows are closed. I do enjoy listening to the Godby High School band practice and can often hear their sports teams practice and games.

I am getting ready to head to the store to pick-up some Coke and pretzels to bring along with me to my neighbour's place where a group of people are going to watch the last home game for the FSU football team. Tomorrow, I am expecting my mother and Ross to drop in to town. With them they are bringing my cat Russ to live with me while they RV travel the country for two months. It will be nice to see her again and have her hang out with me for a while.


1 I say "historically black" as a jab to the media who always try to stick that line in any story covering FAMU. Even when that particular fact is of little or no relevance to the story.
1 Comment https://mtsutro.org?p=356
←12