A change of pace is always welcome. Even though my new routine is still fairly fresh, the enjoyment of spending time with someone familiar was timely, if not belated. Chris came up to Tallahassee last Wednesday night and has been here providing company up until about an hour ago. He now headings back toward central Florida via Interstate-10, driving through the gently cool but breezy evening.

Although the opportunity to visit sites such as the Old Capitol Building and the 22nd floor observatory and tour at the current Capitol was nonexistent due to the holiday, we managed to spend the time with ease. In fact, it is truly hard to believe that these past days have gone by so quickly. But then again, I do suppose that is how the aphorism "time flies when having fun" came to exist in the first place.

Regardless, tomorrow marks the resumption of the standard daily routine. Work, laundry, grocery shopping and the need to clean. But the current backlog of these tasks was all worth it, of course. I again conclude with with a present-day look at McCord Point where Thomasville Road breaks away from North Monroe Street to compare with its 1966 counterpart above. Just to the right outside of the frame is the notorious Prince Murat Motel.

Since I have been enjoying That '70s Show season three on DVD and discovered the development folder containing the Easter Egg — a hidden message or feature in a movie, book, CD, DVD, or computer program — planned for this site when it was last rebuilt in February 2005, I decided that it was fine time I complete that little project. But instead of continuing work on the Gattaca-themed Easter Egg already in progress, I decided to make a little tribute to That '70s Show.

Let me know what you think if you find it.

I have been having trouble with the driver's side window in my car for a few years now. Fortunately, the problem was never severe enough to warrant a trip to an automotive professional. Unfortunately, this problem I have successfully ignored and dealt with for all this time finally stood-up to be noticed.

The trouble first started back when I was working at the real estate company in September 2003. I would have difficulty raising and lowering the window, an apparent result of the seal loosening and failing. The solution that would prove effective for over two years was to simply push on the interior door panel when adjusting the window's position. In all, it was a fairly minor problem effectually "fixed" with very little effort.

Getting home the other night, I went to close the window as always but instead discovered the glass has come off the track somewhere inside the door. As the window closes, you can see where it is no longer surrounded by the seal. This leaves a three to four inch gap of open window, which is not a problem per se where I live. But the National Weather Service has been forecasting — and subsequently pushing back — rain for this week. Either way, it now requires action.

Rather than throwing money at the problem, money I can most certainly use for other, more pressing engagements, I have decided to throw myself at the problem. I have decided to remove the interior panels of my car door and reset the window's position on the track. The light is particularly favourable for work outdoors today. The temperature is a comfortable 73 degrees Fahrenheit and the relative humidity is 53%.

Please feel free to wish me luck, hope, pray or whatever it is you do to help ensure I do not make it worse. 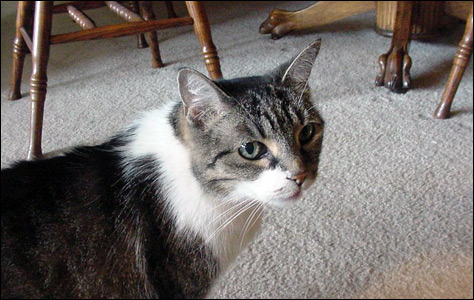 As I write this, my cat Russ is en route from Orlando to my Tallahassee apartment where she will live for the next few months. My folks will be traveling the country by RV during that time and while they do, Russ will be my roommate. It has been a few months since I have seen her, so I am especially looking forward to her arrival tonight.

The plan is for them to arrive at my apartment and see it for the first time since helping me to move. Then, we will move a couch from the next building over into my place; I am "storing" it for a neighbour. After that, a bite to eat and a bon voyage farewell to Carol and Ross as they continue on their journey west. Figuring that Marie Livingston's is probably a little too pricey, I am going to pitch Julie's for dinner on suggestion from my friend and co-worker Marc. Plus it is close to I-10 and convenient to get in and out of with a large truck and RV.

More photographs of Russ are available in the Mount Sutro Gallery. Pictures of the move are also coming soon, just as soon as I re-install my scanner.

UPDATE
She is still pretty uneasy with her new and strange surroundings, but I think Russ is coming around nicely. She is still very cautious in her movements, but still obviously in full cat mode; ready to pounce or jump at a moment's notice. But alas Russ is old and her younger days of playfulness have passed. I imagine in no more than a day, she will be curled up to me on the couch watching a movie as happy and content as possible.

Speaking of Village Pizza and Pasta, I was running an errand in that part of town a few days ago and decided to treat myself to dinner and a few beers. Unlike the last time I ate at this shopping centre eatery, closing time was not around the corner. Many other tables were filled with happy diners and the staff was obviously not going home anytime soon.

When I was getting out of my car I realised I had inadvertently parked in the same space I had parked in previously. Upon entry I was told to seat myself, so I entered the main dining room and made an assessment. From left to right: man dining alone, older couple, mid-aged couple finishing pizza but chatting with the waiter, family of four, random assortment of four and a table of two women. I decided to sit at the booth between the man dining alone and the older couple.

As soon as I sat down I again realised that it was this exact booth I was seated in during my previous visit. Can anyone say The Twilight Zone? The older couple behind be talked about their friends and family, breaking them down into categories like "still alive," "on the way out" and "six feet under." Their callous judgments and respectless attitude were overpowered only by the chatter from across the way.

There they are, the mid-aged pizza eaters looking to pay their bill. They have the check in hand, but are talking — excuse me, listening — to the incessant ramblings of their eighteen year old waiter. While the couple seemed generally interested in his unending banter, like they knew him when he was growing up or something, he continued on and on moving from topic to topic with paced breaks to allow the man an occassional few words. I was really glad I elected to sit as far away from them as I did.

I ordered the spaghetti with sausage ($7.95) which came with a salad and some of the best garlic bread rolls I have had recently. With it, a few Anchor Steam beers were enjoyed. When I was waiting for the waitress to bring me a box and the check, the waiter across the way finally finished chatting with those people and went back to work, allowing the diners to leave.

And people think I am crazy for so carefully selecting seats in a restaurant.