I am starting to get the feeling like tropical cyclones have a bounty out on my head. Last year's hurricane barrage by Charlie, Dennis, Frances and Jeanne more than made up for the relative lack of tropical activity during the balance of my nearly seventeen years in the Sunshine State.

Then, just as I was moving to Tallahassee last year, Hurricane Katrina threatened the area but shifted course only a day or two before. Looking back on the events that followed that change in weather gives me some pause, realizing how things may have turned out had a Category Five hurricane made landfall the weekend I moved to town.

In all of those cases, luck was on my side. And now, only thirteen days into the official tropical season the first named storm of 2006, Tropical Storm Alberto, makes waves nearby. It currently looks to make landfall in the "Big Bend" region sometime early this morning, but some of the outer bands have already blown through the area.

Earlier tonight there were some gusty sustained winds and heavy rain that proceeded through the region for a good hour or so. Since then, the weather has been rather calm, with only light winds and residual precipitation peppering the area. I imagine that by the time I awaken tomorrow for work—which is still open according to the emergency status number—the situation may very well be different as Alberto will have moved inland.

Hopefully my luck with tropical cyclones did not end with the conclusion of the 2005 season.

UPDATE: 13 June 2006, 1807
The wind and rain continued overnight and through most of the day with some stronger bursts here and there. Overall, it has been a pleasant day with temperatures in the mid-seventies. Local news reported some trees and power lines were downed before dawn, but nothing so severe as to keep any roads closed.

Now the only thing to look forward to is the oppressive heat that we have been promised. The forecast from the National Weather Service has only this to say about the expected conditions Friday: Hot.

When I last changed hosting providers nearly four years ago, I made sure that my plan had room to grow. I wanted plenty of monthly data transfer, a decent chunk of hard drive space and various other bells and whistles. My industry friend Marty fixed me up well and thus I shall remain with TLC Web Enterprises indefinitely.

With ample features in hand, the current iteration of Mount Sutro took form and in its own way gained some popularity. Certainly there has always been more traffic from people using web and image search tools versus that from regular readers, but never disproportionately so.

That is, until January of this year rolled around. Between connectivity issues—which, aside from a few recent examples, have been fixed—and my lack of interest in writing for the site, regular updates have been notably infrequent in the time between then and now. I naturally expected to see a drop-off in overall traffic as a result.

When I checked the site logs in early February 2006, I was rather surprised to see January 2006 was the new record holder for data transfer used. Over ten and a half gigabytes of data passed from my server to the world that month.

These figures may seem small in comparison to hard drives you can purchase for $100 today or the amount of transfer seen by mainstream blogs and websites, but for my little operation I have to admit being a bit impressed.

February rolled through and with under eight gigs transferred, I assumed the expected slow down was occurring. While the hiatus continued, traffic did its normal ebb and flow, but kicking between nine and eleven gigabytes of transfer monthly instead of the usual six to nine.

I knew there must be a logical reason for all this so I set out to find it. You do not have be no Sherlock Holmes to figure out this mystery, either. A simple in-depth review of the log files told the story loudly and clearly.

First, and these are in no particular order, not since GeoCities has there been so impressive a centralized repository of ugly, unreadable, compliance-hating, auto play multimedia-filled sites. At least GeoCities users have the excuse of time, since the mid-nineties saw the web come into its own. I will take animated GIFs and <BLINK> tags over MySpace sites any day.

Second, as with other social networking sites like Friendster, after some initial amusement I find no real purpose or need for them. I maintain my own website so I can advertise the information I choose to advertise, without the help of any profiles or three page forms. Specific to MySpace, I am not at all interested in the daily ramblings of high school students, nor do I have a desire to meet other people on the basis of which American Idol star I may or may not prefer.

Third, embedded auto play multimedia sucks. Yes, I know I mentioned this item already, but it is so offensive I had to mention it again. It used to be cool to have music play on your pages, I feel mostly because MIDI technology was just getting to the point where commercially-available sound cards could adequately play those nifty rock band songs. Share all the music you want, but at least make me have to press play first. And if you cannot comply with that simple wish, at least stream me something decent.

Fourth, did you know that when MySpace was acquired by News Corporation, the terms of service contract was modified to include a clause (6:1) effectively giving MySpace and hence News unrestricted rights to "use, copy, modify, adapt, translate, publicly perform, publicly display, store, reproduce, transmit and distribute" any and all content posted by users. Without having to pay for it, I might add. All this from a free service actively inviting bands and musicians to set-up a MySpace account and post their otherwise copyright protected lyrics and music.

Fifth, the leeches and yes, the main point.

Search engines have always been friendly to my site, but the multimedia searches can be deadly. As I posted more and the search engines indexed more, incoming traffic for and the leeching of images increased. At first I would check out the offending site and decide if I cared or not. Most often I did not if the site contained nothing objectionable and if it was personal or non-profit.

But the growing popularity of MySpace has served to exacerbate this issue. After recently reviewing my logs, I quickly concluded that although my downloadable assets for Sutro Tower and the MasterCard advert featuring Robert De Niro accounted for a noticeable portion of the increased data transfer, the majority of it was the result of leeching from MySpace.

One by one I identified the graphics most commonly hotlinked and decided on an appropriate bait and switch tactic. Instead of simply renaming the images and leaving "red x" placeholders on the leeches' pages, I knew I wanted to program a redirect so that an alternative image would instead be displayed. Further, I was going to use a public resource I (indirectly) support to host the replacement graphic, therefore achieving two goals: data transfer reduction and leech dissuasion.

Wanting to take the high road while also selecting a replacement image that would not be legally dubious, as my plan would affect countless minor's pages, I narrowed down my choices to one. 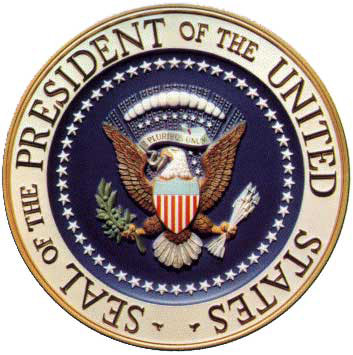 I only wish I could have been there as the junior "webmasters" came to their site and found hero Johnny Cash replaced with that. Not to mention the proprietors and users of the forums and other sites I took action against.

Return visits to leech sites have shown most people have now removed the offending hyperlinks, but the Seal still decorates some Spaces. A picture of the Constitution was the runner-up, by the way. The Seal won in the end because of its size and dimensions.

The lesson here, kids, is to not leech images. Upload them to your own space. That is why they call it MySpace, after all. Are you given insufficient space? If so, you should complain! I think the $23.9 billion dollar father News should be able to swing an upgrade.