If you click around YouTube long enough, you are bound to come across homemade music videos usually in the form of movie and television clips edited to a related (or not) song. I seldom watch videos of this nature, but on a day in early July 2008, I happened to be looking for something in particular.
UPDATE: Check out The 30 Century Man Returns for the 2010 re-release.
Having always enjoyed the animated television program Futurama, I was excited to learn of the four direct-to-DVD movies resurrecting the once-cancelled series. When I finally saw the first of these new productions, Bender's Big Score, I was very impressed with it overall. I thought the story, the careful attention to the series continuity and the presence of the original cast all made for a fantastic return from the television grave. As you might expect knowing me, the music made an impression as well. The score by series composer Christopher Tyng really helped bridge the television elements to the larger film as did the cool extended remix of the Futurama theme. The soundtrack is rounded out by a few amusing character performed musical numbers by Ken Keeler and a song called "30 Century Man" performed by The Jigsaw Seen. Written by Scott Walker and originally released on his 1969 album Scott 3, the "30 Century Man" cover by The Jigsaw Seen—from their 2002 Songs Mama Used To Sing—is heard during a pivotal point in the movie and is particularly moving and appropriate. Interested in hearing the song in its entirety, I went to YouTube and began my search. The video I found by Araka5i was of the type I mentioned before, featuring clips from a few films and set to the Scott Walker cut of the song. I found the original version quite different from the cover and although I enjoyed it, I still wanted to hear The Jigsaw Seen performance. It turned out I was not alone as one commenter, taylorthebarbarian, wrote of his desire to hear the cover on YouTube. In reply to this comment, the band wrote, "feel free to post a video of our version." You have to love a band that realizes the potential the internet has to introduce music to new and diverse listeners worldwide. Why not let fans promote you for free, right? I practically surprised myself having the thought, but before long I decided to take this invitation and produce a video myself. After purchasing the song from Amazon.com and encoding the movie into an editable format, I fired up Sony Vegas 7 and got to work. It took me about twenty-four hours from start to finish, but if I may say so myself, for a first attempt I think the final product turned out well.

UPDATE: This video is no longer available. Check out The 30 Century Man Returns for the 2010 re-release. 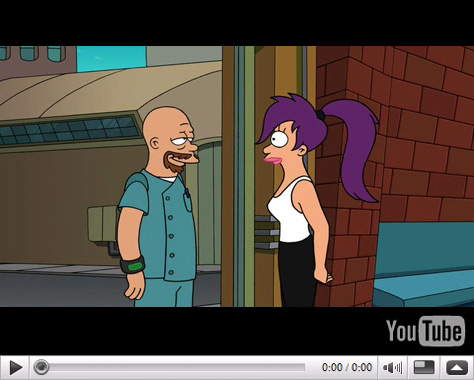 Given the scene in which the song appears in the movie, I thought it would be appropriate to follow the character of Lars and his relationship with Leela. Even as of this writing, six months later, I still receive positive comments and e-mail. The best one, of course, was from The Jigsaw Seen's co-founder Jonathan Lea who said the video looked "fantastic." They even placed a link to it on their website's news page on 07 July 2008. It was a fun experience making this video and I gained a better appreciation for film and television editors. I would not expect many future releases of this sort, but you never know what may inspire me one day.
Photo Credit: David July
Photo Credit: Twentieth Century Fox Film Corporation
"The 30 Century Man" https://mtsutro.org?p=781