I spent several hours on the telephone this afternoon with my friend Marc who is currently in California on business. When not working near Sacramento, he has been spending time in San Francisco where his friend Danny moved a few years ago. Knowing my affinity for the city, he has been calling me from various locations to let me know how cool something is or to get directions and hours of operation. Today's call was to let me know he was finally embarking on a journey to Twin Peaks, to see the view of the city I recommended and to take pictures of Sutro Tower and the vista for me. As I joined in, Marc and Danny were heading south on Castro Street between 14th Street and 15th Street, where Marc expressed his surprise and displeasure that numbered streets while consecutive are not necessarily exclusive, as in this case where Henry Street comes in-between. Acting as navigator, I launched Google Maps Street View and could see (basically) what they were seeing. Marc kept me apprised as to their progress naming off intersecting roads as they went. After heading down into the Castro looking for a photo shop that has apparently closed, they backtracked and headed west on 17th Street. Marc reminds me of the stairway I saw on the map while planning this little trek last week and asks how to get there. To my knowledge, there was nothing special about it, a typical San Franciscan residential stairway connecting Ord Street to Levant Street, but Marc and I were both amused at the name Vulcan Stairway. As they ascended the stairs, Marc and Danny encountered someone who lives there. The nice woman said she is the oldest resident on the Vulcan Stairway, living there for some twenty-six years now. Following Levant to Lower Terrance, down Saturn Street and finally to Temple Street, the duo is back on track, continuing on 17th toward Clayton Street where Twin Peaks Boulevard begins. As they begin the final ascent, I assure Marc and Danny the trip will be worth it and that little previews of the outlook to come will pepper the route. Passing Raccoon Drive and Burnett Avenue, stopping to take pictures as they go, they decide to take a page from my past and detour. Instead of following the winding path of Twin Peaks Boulevard to the summit, it is possible to climb up to the observation point on Christmas Tree Point Road if you are careful. They made it without incident and agreed that it was worth it, albeit questioning why they did not simply take the car. I am told the sun made things more difficult for some Sutro Tower shots, but Marc did get some good ones from Twin Peaks, as well as of the rest of the city. I am looking forward to his return to Tallahassee so we can chat and look at the pictures. Having been a part of this experience remotely, the images will round things out nicely. I will update this article with the photos as soon as I have them and no doubt include a few new Sutro Tower pictures on its site. 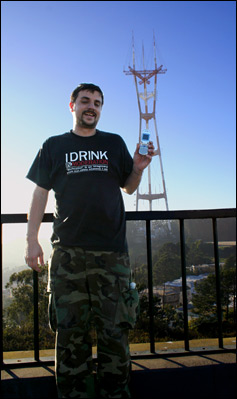 In a final virtual moment, Marc had Danny take this picture of us at Sutro Tower together—I was saying "hello" over the telephone at the time. Better still, I will have the chance to relive this journey in person when I take my own trip to the bay area this year. Having been one decade since my last vacation to San Francisco following my graduation from high school, I decided recently it was about time. The tentative schedule has me depart Tallahassee in the early morning on Thursday, 21 May 2009, connecting through Memphis—intentional after my positive layover there on "The Day Trip" to Las Vegas—and arriving at San Francisco International after 1100 PDT. I will head back after noon on Wednesday, 27 May 2009, change planes again in Memphis and get back home just before 2200 EDT. To save money, I will be using my frequent flyer miles with Northwest Airlines to book my seats. I will have to pay only $187 to make up for the 5,246 WorldPerks miles I lack toward the needed 25,000. And thanks to the generosity of my friend Ernie, I will be staying at his Mission District apartment to save on a hotel room. With those two essentials taken care of, I can focus on saving for my time there. I am not going to get too excited yet as I have been here before, making and cancelling plans a few times over the years. There should be nothing to stop me from going this time though and as soon as I book my flights in the next week or two, I will know it is for real.
Photo Credit: Josiah Mackenzie Original Photo Credit: Marc Malonzo IV and Danny Patterson
"The Remote Experience" https://mtsutro.org?p=663