Back in May, I went down to Fort Lauderdale to attend the Florida Governor's Hurricane Conference (GHC). An annual event for emergency management professionals, the GHC offers attendees a selection of over forty training sessions and nearly sixty workshops.

It was an exciting time for me. I had recently been promoted at work and on the day before I drove to the GHC was named the Child Advocates II Board Member of the Year at the Second Judicial Circuit Guardian ad Litem Program's annual Guardian ad Litem Appreciation Day. A week in a beachfront hotel, albeit during a business trip, was certainly welcomed.

Both an excellent educational and networking experience, I was impressed with the overall organization of the event. In the future, they need to blanket the place with wireless internet though. I had to rely on my personal smartphone's cellular connection to monitor email, occasionally tweet and refer to the schedule.

Perhaps the highlight of the week for me, however, was the tour of the National Weather Service's (NWS) National Hurricane Center (NHC) that I was able to take on Tuesday, 15 May 2012. 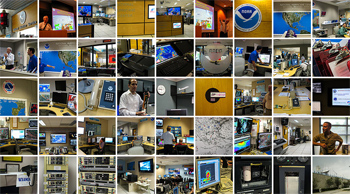 It was a forty-five minute transit south by coach from the Greater Fort Lauderdale/Broward County Convention Center. Looking out the window and spotting familiar locations along the way—like the large shark painted on the side of Paul W. Bell Middle School—I could not help feeling as if I was heading to Key West, my destination every other time I passed through here.

Upon our arrival, we were met by National Oceanic and Atmospheric Administration (NOAA) Public Affairs Officer Dennis Feltgen who guided us to the security reception desk where we showed our government IDs and signed in.

It was Feltgen I asked if photography was permitted and his affirmative response elicited both joy and regret in me. Since the trip was not recreational, I had previously decided to bring only my pocket-sized workhorse, the Canon A540, but I immediately wished I had my Canon EOS 550D for the tour. 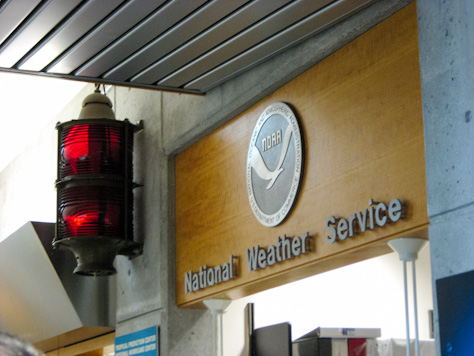 Our first stop was the Media Briefing Room, which is used for training, public outreach and media broadcasts during tropical events. Broadcast studio lights hanging above, the entire left wall of the room is made up of floor to ceiling sliding glass doors beyond which is the broadcast desk and Operations Area. 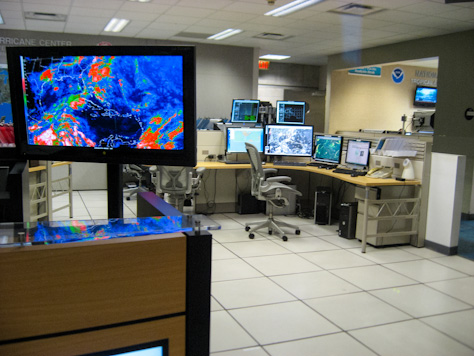 Feltgen and his colleague first went around the room having us introduce ourselves. Our contingent was fairly diverse with members of state and local government, military, law enforcement and a few non-governmental organizations like the Red Cross. 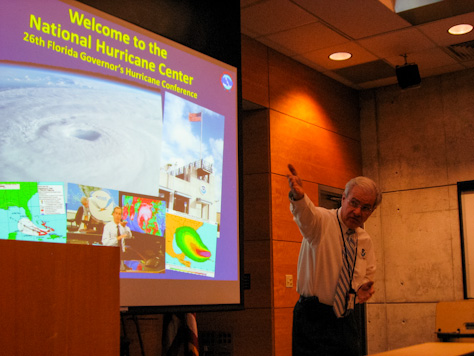 After describing the history of the NHC and describing its present-day organization and functions, we split up and my group started the tour.

With two forecasters on duty at all times during hurricane season, the operations area is the heart of the NHC. Hurricane Specialist John Cangialosi showed us the various tools and resources staff use to collect data, analyze it and apply computer models, eventually producing public forecast products and guidance. 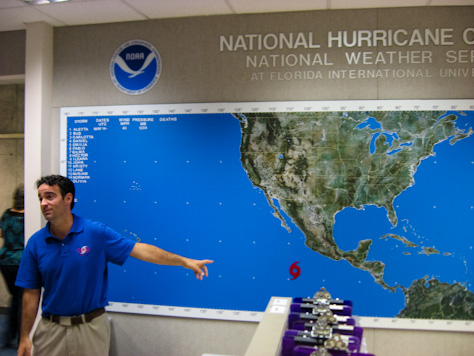 It was the first day of the Pacific hurricane season and the day before, a tropical disturbance organized sufficiently to be designated as Tropical Storm Aletta. It was cool to watch as the forecasters on duty in operations processed real-time data on Aletta and prepared for the upcoming Atlantic season (which ended up spawning two pre-season storms as well).

Senior Hurricane Specialist Daniel Brown was present and working as well, pausing from his paperwork to say hello. 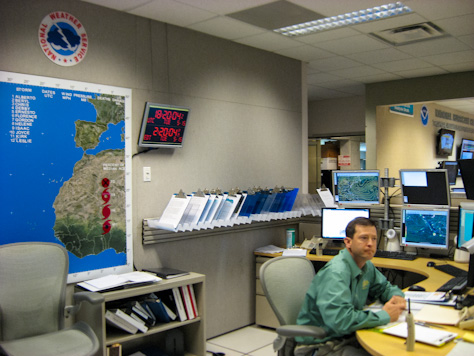 Public tours of the NHC are only offered from 24 January to 26 April, obviously to avoid distractions to the staff during tropical events. Even though Aletta did not become very strong and never posed any danger to land, I felt fortunate to be able to tour the facility while something was going on. 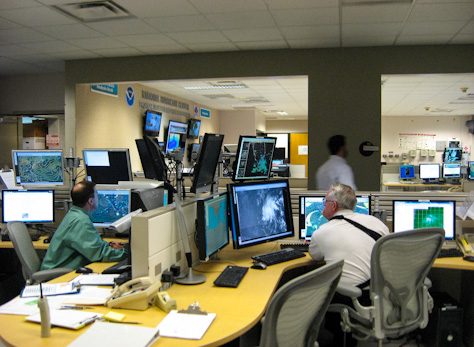 The NHC frequently holds coordination conference calls with other NOAA weather entities when preparing forecasts. During tropical events, they also provide daily briefings and expertise to the counties and State Emergency Response Team (SERT), of which I am a member. 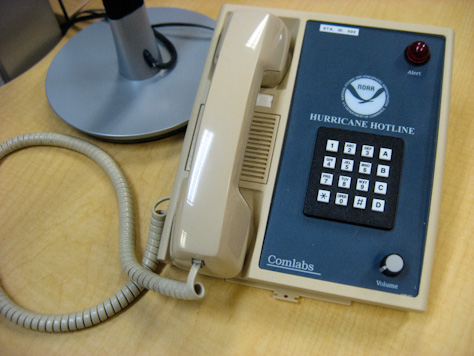 The part of operations area familiar to most people is the broadcast desk from which NHC personnel broadcast tropical updates and provide media briefings. 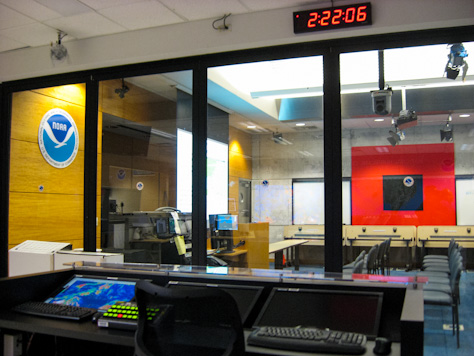 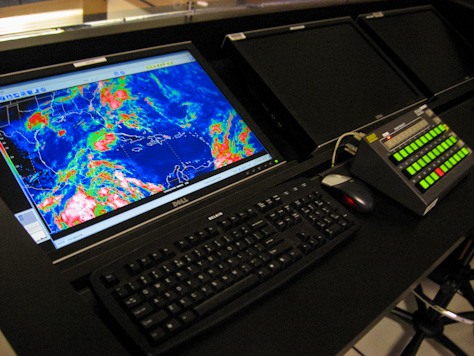 Next, we walked to the Chief Aerial Reconnaissance Coordination All Hurricanes (CARCAH) office and met Meteorologist Steve Feuer. Feuer briefed us on the fleet of US Air Force and NOAA aircraft deployed by CARCAH to investigate a storm, the technology used and their flight plan methodology.

A typical "hurricane hunter" mission lasts ten or more hours, permitting a multi-vectored course through the storm in different directions and at different altitudes. Despite it likely being a bumpy ride, I would jump at the opportunity to go on a CARCAH flight and photograph the crew, equipment and storm. 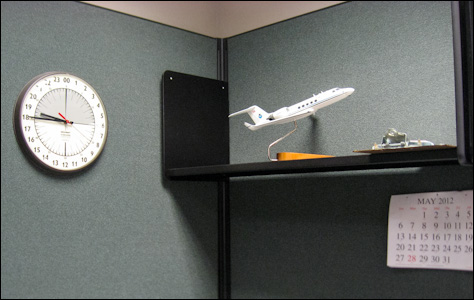 Complementing on board instrumentation, dropsondes are also deployed from the aircraft allowing for the collection of data in and around the storm and water. 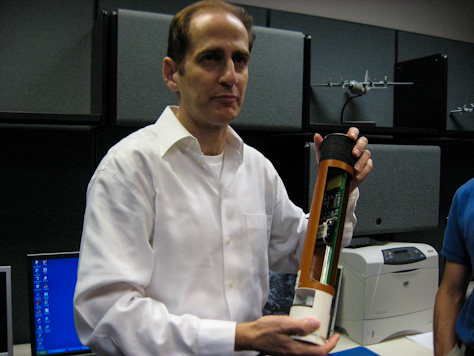 I asked Feuer if dropsondes are collected and reused, but he said that they are designed to be expendable and contain some components—the batteries for one, if I am not mistaken—designed to be more bio-friendly.

Moving on to behind the operations area, Cangialosi next took us to Tropical Analysis and Forecast Branch (TAFB) workspace. 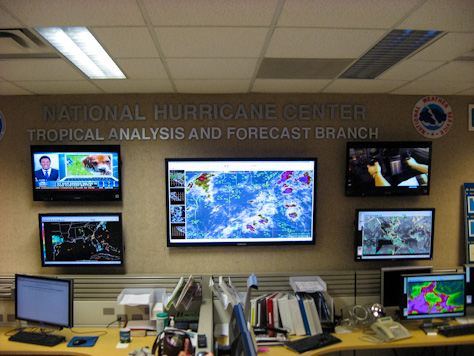 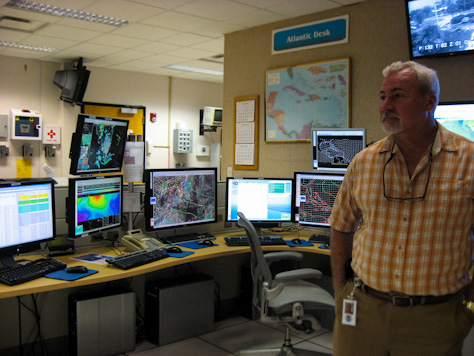 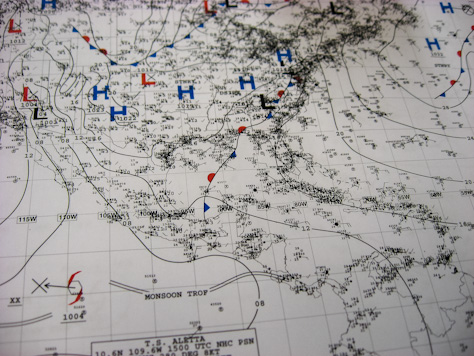 Our next stop was the NHC Storm Surge Unit (SSU), responsible for forecasting the abnormal rise of water from a tropical system above the predicted astronomical tide. 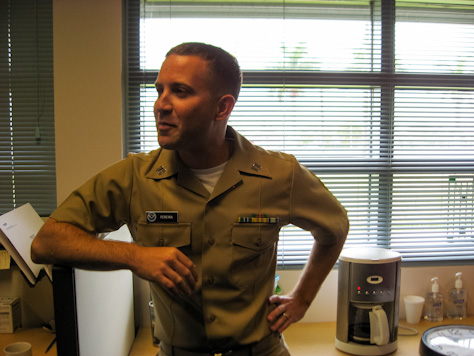 While their acronyms may be amusing, the SSU's role at the NHC is critical. Storm surges are "often the greatest threat to life and property" in a tropical system.

Backtracking through offices, we made our way to the other entity that calls the NHC home, the Miami-South Florida Weather Forecast Office (MFL WFO). Providing full-time weather services for the region, MFL WFO was originally established as Miami's first Weather Bureau Office (WBO) in June 1911. 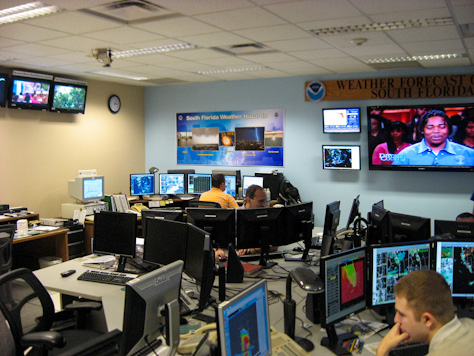 On this day, WFO staff were closely monitoring a local storm system with the potential to produce severe weather. As a staffer briefed the group on the office, I watched as meteorologists analyzed the storm and prepared their forecasts. 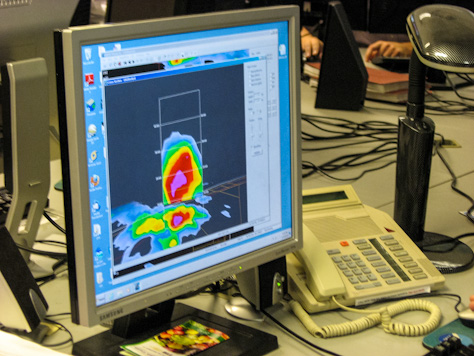 I was also interested in three things located in the back of the room. First, I discovered the WFO's amateur radio station used for Skywarn and its amusing vanity call sign WX4MIA. 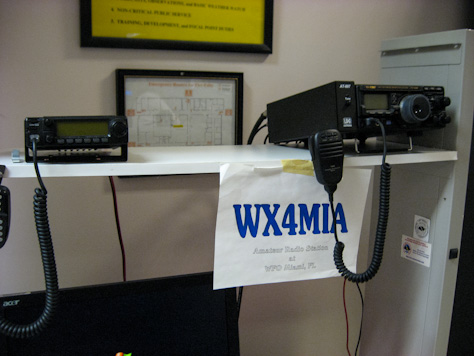 To the right of the ham radio desk stands a black equipment rack housing vintage weather station equipment including an anemometer and a barograph. My photograph's resolution is unfortunately too low to make out the hardware's date of manufacture, but I would guess late 1950s or early 1960s. 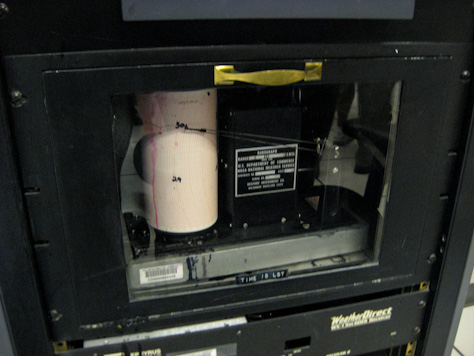 Finally, next to the weather station is a beige rack holding the equipment and control panels for NOAA Weather Radio (NWR) in south Florida. Now automated by computer, this NWR console has manual control interfaces for WXM58 162.400 MHz in Belle Glade, KEC50 162.475 MHz in West Palm Beach, WWG92 162.525 MHz in Naples and KHB34 162.550 MHz in Miami. 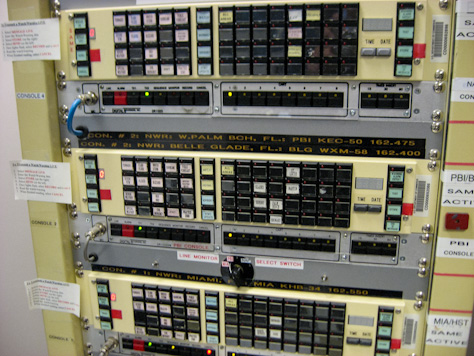 Before I knew it, an hour and a half had passed and it was time to head back to Fort Lauderdale. I am glad to have been able to take part in this special NHC tour, especially after being in classes taught by many of its staff the day prior. 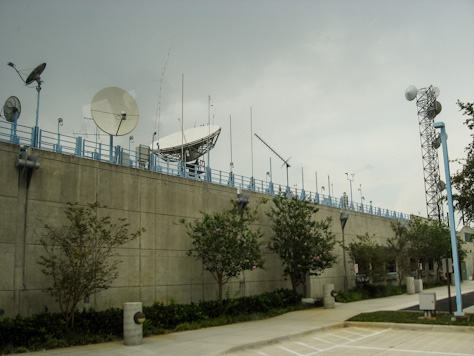 I would like to thank all of the NHC staff who hosted and spoke with our group. After having hosted the Federal Highway and Safety Administration (FHWA) in April for a briefing and tour of the State Emergency Operations Center (SEOC) in Tallahassee, it was fun to be on the other side. 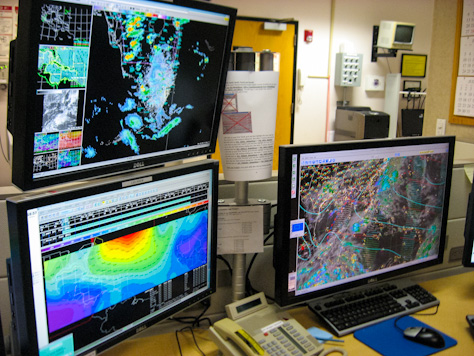 The balance of my time down south was great for many different reasons. I may elaborate on the GHC and trip more in a future article, but in the meantime I present these four groups of additional notes and highlights.