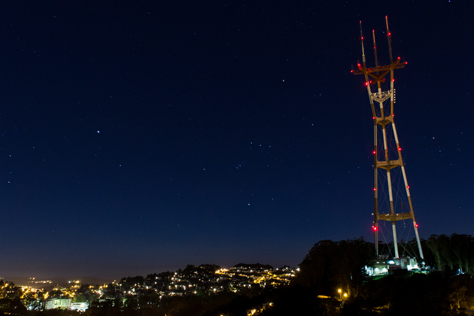 Thirty-second exposure from Twin Peaks of Sutro Tower (1972), the sky and lights from the western neighborhoods beyond.

I have wanted to take long exposure photographs in California and from Twin Peaks in particular ever since my last visit in May 2009. As Marc has a tripod, we were able to visit some key shoot locations—including Yerba Buena Island, Twin Peaks and the Marin Headlands—and do just that.

This was my first real experience with a tripod, not counting the two Milky Way Galaxy pictures Erik took at St. George Island with my camera, and it was a true learning experience.

Consequently, the results are a mixed bag of successes, near misses, beautiful mistakes and garbage. I had some difficulty getting clear and still shots, especially when using longer lenses.

I guess that wind gusts in a few of the locations were a contributory factor, but I really think that for my setup I need a heavier, more sturdy tripod. Not only will that help support the weight of my longer lenses, but should make it easier to stabilize the tripod on inclined or unpaved surfaces.

Fortunately, many of my long exposure shots seem to have come out well, including the thirty-second exposure of Sutro Tower atop this article. It was taken in the early morning hours of my last day in California—one last trip to Twin Peaks and the city before heading back to Florida.

Like most of the days of my visit, the weather on this night was perfect for outdoor photography. In fact, the weather during my entire trip was uncharacteristically nice, a fact which locals continued to mention to me with their thanks and appreciation. The moon was also still nearly full, providing an incredible amount of ambient light.

When I first saw this photograph, I had very mixed emotions. The lighting, the colors, the sky; everything turned out perfectly except for the wide-angle lens perspective problem. As close as I was to Sutro Tower and shooting at 18 mm to fit the tower in frame, it gives the appearance that Sutro is leaning to the left.

In the end, I was not pleased with any of my attempts to correct the problem in Lightroom and accepted it as-is without perspective correction, rotation or cropping. After all, many of the 2,493 photos that I took this trip are of Sutro Tower and are not shot the same.

Besides, should I discover that I failed to adequately capture something I had planned, I will simply have to return for a re-shoot.