Eric Rewitzer's and Annie Galvin's logo in metal in the spacious backyard of 3 Fish Studios.

I cannot remember when I first came across the original artwork of Eric Rewitzer and Annie Galvin, the husband and wife team that call 3 Fish Studios their home away from home.

Presumably the discovery was via a piece of Sutro Tower artwork, as Annie and Eric have featured my favorite tower in numerous pieces over the years.

Since I was unable to visit their former studio in the Dogpatch during my last visit in May 2009, I made a point to write Eric and Annie in advance of this trip. We made plans for a visit at their new (as of mid-2012) studio in Outer Sunset, just blocks away from the Pacific Ocean, on Monday, 21 January 2013.

View the entire 3 Fish Studios album in the Gallery

Founded in 2007, 3 Fish Studios "creates a dedicated space where [Annie and Eric] can make and show their artwork together, and invite people to share the joy in doing the same."

When not producing their own work, Eric and Annie regularly host small printmaking classes. All materials and instruction are provided; students leave with new skills, fun memories and an edition of their own prints. 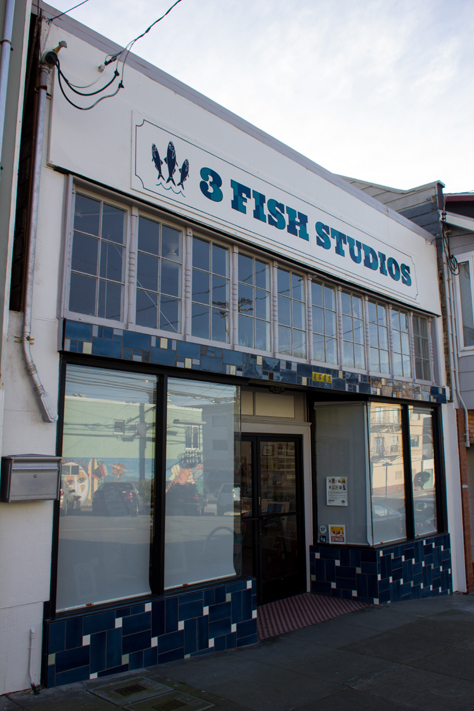 Marc and I started the day by driving from Sunnyvale to the Haight for lunch and a beer at Rosamunde Sausage Grill and Toronado Pub, respectively. It was a short drive from there to the Outer Sunset, where we easily found street parking.

The 3 Fish Studios storefront at 4541 Irving Street has been attractively refurbished and decorated with tiles. The 1917 building was originally used as a grocery store and more recently was home to a local dance studio.

The interior is a pleasant and comfortable space with high ceilings and light colored walls. Those entering the gallery are first met with tables and wall displays with artwork by Annie and Eric in various designs and sizes. Beyond the finished works is the studio area complete with work tables, supplies, printing presses and other equipment. 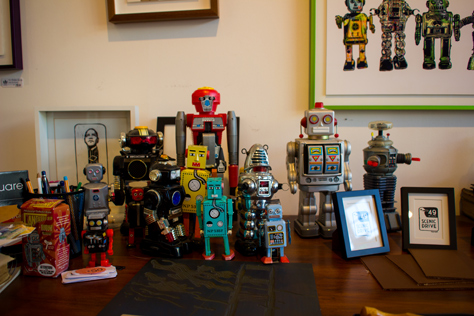 It was a pleasure to meet and talk to Eric and Annie, as well as their studio staffer, a very nice San Francisco native whose name I embarrassingly cannot recall. It is obvious that they are great people who love what they do and the city in which they do it. Annie moved to the area from Dublin, Ireland in 1989 while Eric relocated from Ohio in 1987. They married in 2001. 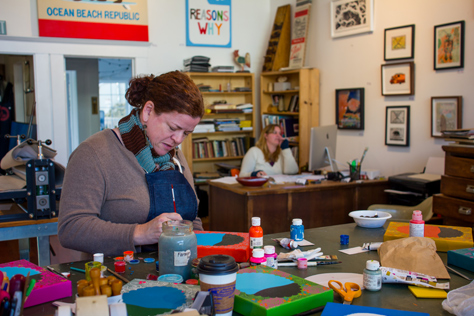 While discussing the inevitable topic of Sutro Tower and sutrotower.org, I mentioned a tattoo based on one of Eric's Sutro Tower linocut prints. He immediately knew that I was speaking of Chris Rosa, who commissioned the tattoo as a tribute to his deceased father.

Rosa had lost track of the original artwork, which he had seen on Etsy, so I put him on the path to 3 Fish Studios and Eric's original print.

Upon hearing this, Eric quickly walked over to a storage cabinet, opened a short but wide drawer and removed the original linoleum sheet carved with the artwork featured in Rosa's tattoo. And with that, he and I were off to create a one-of special edition hand pulled print!

Eric took the carved linoleum Sutro Tower to the painting area in the back section of the studio and presented me with a selection of three colors. I picked the red paint because the shade reminded me of Federal Standard 595 Color 12197 "Aviation Orange," one of two colors used to paint the real tower. 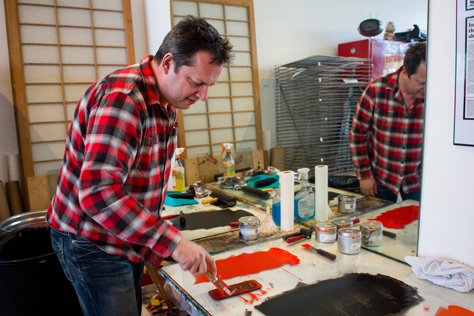 After rolling the paint onto the linoleum, Eric moved it to an alignment page on the printing press and placed a piece of thick paper on top. He then positioned the press blanket and readied the machine for use. I was pleasantly surprised and amused when I was told that I would be operating the press myself. 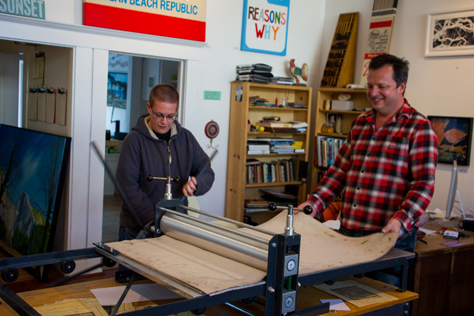 Turning the large, plus-shaped handle of the press for about a minute, the blanket, paper and linoleum moved slowly through the contraption. When complete, Eric signed the work and embossed it with the 3 Fish Studios logo.

My contribution was small, but it was a fun experience. I can only imagine how fulfilling an entire printmaking class would be here.

Marc and I spent the rest of our time chatting with Eric and Annie, who also graciously served us delicious pints of beer, as well as looking around the rest of the building. 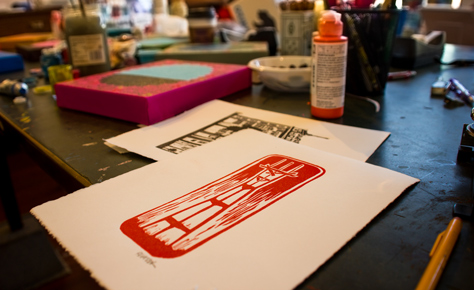 The spacious but cozy fenced-in backyard seems like a wonderful place to spend time outdoors with friends, family and customers alike. Eric's wooden table in the shape of California sits at the center, while gardens and other adornments complete the space.

Whether you are looking for affordable local artwork, clever one-of-a-kind gifts or to learn and make your own linotype prints, no visit to San Francisco would be complete without a trip to 3 Fish Studios.

Thanks to Annie and Eric for their hospitality! 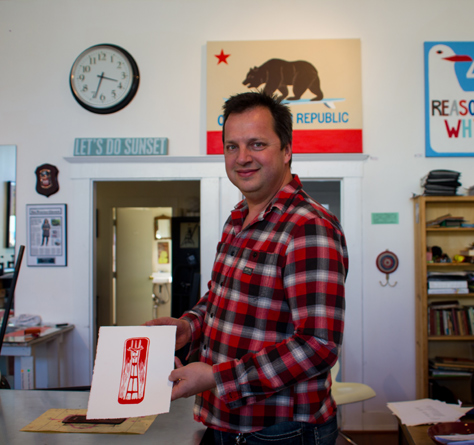