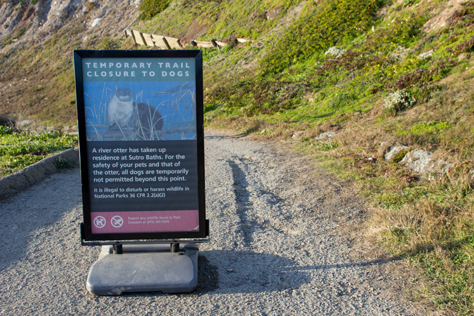 "Temporary Trail Closure to Dogs" sign on the trail down to Sutro Baths (1896) due to Sutro Sam the river otter's unusual visit.

Generally known for being cute, playful and curious, the North American river otter inhabits inland waterways and coastal areas in the Pacific Northwest, New England and Atlantic states, the Gulf of Mexico, Alaska and Canada.

They are also known to live in parts of northern California but in recent years have been spotted closer to the San Francisco Bay Area, including Muir Woods, Tennessee Cove, Rodeo Lagoon and elsewhere along the Marin Headlands.

In order to study, better understand and provide public outreach on the river otter's habitat ecology and conservation status there, the River Otter Ecology Project was established in February 2012.

The Marin County-based project has logged over 200 sightings, including one that would make headlines and help publicize the non-profit's work. In late September 2012, volunteers noticed a rare sight—a river otter at the Sutro Baths ruins, the first such observation in San Francisco in at least fifty years.

Before long, news spread of the Sutro Baths river otter and the one-to-four-year-old male got the nickname "Sutro Sam", an unofficial Twitter account, paintings of himself, a leading role in a children's book and possibly too much in-person attention from humans and canines.

Concerned for the health of Sutro Sam, a wild animal living in a popular tourist and local attraction, the River Otter Ecology Project worked with the National Park Service at Golden Gate National Recreation Area who posted signs warning of the unusual presence and temporarily restricting access.

Over the course of the next months, Sutro Sam spent time sunning himself on the ruins, dredging the muddy bottom of the pool and eating carp, fish and later on water birds like ducks.

Given the proximity, I had scheduled to follow our visit at 3 Fish Studios on Monday, 21 January 2013 with a trip to Sutro Baths. I wanted to show Marc the area, take photographs, and yes, perhaps catch a glimpse of Sutro Sam myself.

There were a few other people who had obviously come to Sutro Baths to do just that. I do not know if they were successful, but Sutro Sam did not make any appearances during our time there.

The last sighting of Sutro Sam was on Saturday, 23 February 2013. In the weeks leading up to his final appearance, volunteers had noticed he was catching fewer and smaller fish.

Either that lack of food or his natural instinct to find a mate are the likely causes for his departure according to Megan Isadore, co-founder and director of outreach and education for the project.

To view some great photographs of Sutro Sam like this one, browse these sets by Jouko van der Kruijssen and Natures Lantern. 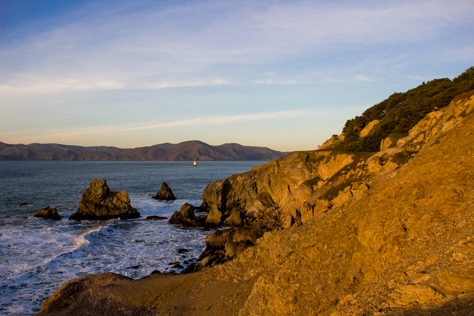 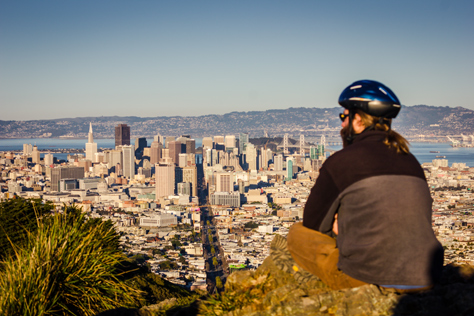 A bicyclist sits atop the northern peak of Twin Peaks looking out over San Francisco on a clear day.

On Wednesday, 30 January 2013, I had an opportunity to visit Google headquarters in Mountain View for a brief tour. Marc and I were to meet up with his friend and our host Matt for lunch.

We first drove to the quad on North Whisman Road and picked up Christan at Google Building QD6, next door to Symantec and just up the way from Roger's Deli—great breakfast, sandwiches and freshly baked breads.

We arrived in the midst of lunch hour, making parking difficult. Google offers a free valet parking service at the Googleplex and there were lines at each of the three valet stations we visited. However, all valet lots were full and we were directed to the subterranean parking garage. It did not take long to see that it too was completely full.

I ended up finding free street parking on Landings Drive near Building 1965. This worked out well since our first stop was the triad of Buildings 1900, 1950 and 2000 located nearby on the other side of Charleston Road.

We gathered a few more Googlers and headed east toward Building 40, crossing a small pedestrian bridge over Permanente Creek. After a quick stop at a small office where Matt signed Marc and I in as guests, we put on our white badges and continued. 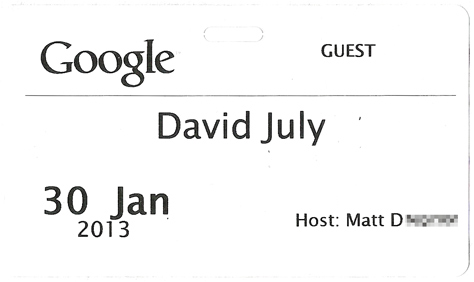 It was extremely crowded as we entered Building 40 and made our way through the main corridor. Even more crowded was the food-court-style room filled with restaurants of varied cuisines and where everything is free. I filled my tray with items from several eateries, grabbed a drink and made a beeline for the exit away from the crowds.

Like most of the days on this trip, the weather was beautiful so the outside tables were at a premium. We managed to find a one that was too small, but we made it work anyway. After all, we were hungry and several members of our party were due in meetings shortly.

Meandering through the complex, it is amazing to see how many people work here. Some 3,500 staffers commute in daily from San Francisco, Marin, East Bay and other nearby areas on the free Google Shuttle coach service. To help people move about the various buildings that make up the Googleplex, colorfully painted bicycles are available for use.

As far as the well-known tourist attractions, we saw Stan, the life-sized Tyrannosaurus Rex replica skeleton; the replica of suborbital air-launched spaceplane SpaceShipOne; a neat Google Earth demo with huge LCD televisions arranged in a circle around the console; and the Android lawn statues.

It was fun, different and I enjoyed myself, but it was really just an office complex. We let everyone get back to work, gave a few people lifts to other Google buildings and then headed back to Sunnyvale.