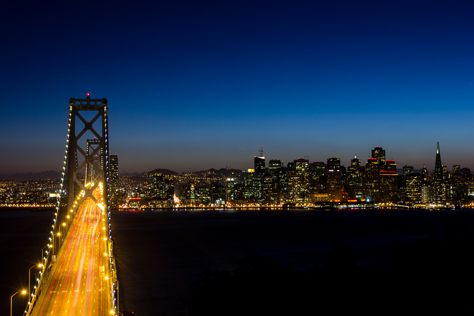 Interstate 80 over the western span of the San Francisco–Oakland Bay Bridge (1936) and downtown San Francisco from Yerba Buena Island.

After seeing amazing photographs of the Bay Bridge and downtown San Francisco taken from Yerba Buena Island, I knew that a visit there was mandatory for this trip.

I took Marc to The Boulevard Café in Daly City for lunch and then to The House of Shields for a drink. I had been to both previously and thought that they would provide a nice and laid back day for us prior to heading to Yerba Buena Island, tripod in tow, to find the spot from which I wanted to shoot.

I could have done five seconds of research to find out exactly how to get to the shooting location, but that sometimes takes all of the fun out of things. We parked in a lot along Yerba Buena Drive and walked through the adjacent wooded area for our first views of the city, coyly peeking through the trees.

Walking east to Forest Road, it seemed that it would take us to the point over Interstate 80 where the road emerges from the tunnel and crosses the Bay Bridge western span. Past some parked cars and trash receptacles was the spot indeed; an area without vegetation on a sandy hill with a mostly unobstructed view of the bridge and city.

I say mostly because the installed fence did provide a small challenge for photography. The sandy surface also gave the lightweight tripod some trouble. To mitigate, we maneuvered its legs into the sand against rocks — right along a spot in the fence where a conveniently lens-sized hole had been fashioned. 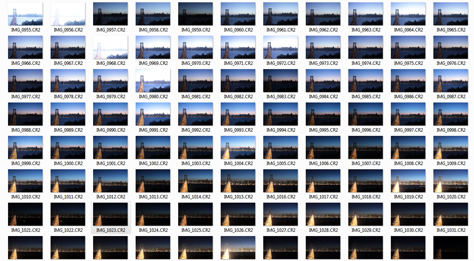 There was someone else already taking pictures from this vantage and in hindsight, I believe he was in the precise spot to capture the bridge head-on. I did not recognize the fellow, though I had been hoping that it would be a local photographer whose work I follow.

Honestly, my results were mixed. All of my shots are a touch crooked which is not a big deal considering the excellent crop tool in Lightroom 4. I experimented with many settings and configurations over the course of an hour, coming away with 130 shots including the above eight-second exposure.

It took a bit of work to get all of the elements correct to achieve my goals. I specifically wanted to capture the streaming light effect of the traffic driving over the bridge and the starlight effect in the presumably halogen lamps. Even if not head-on with the bridge, I really like this angle and the lighting. It looks particularly nice on my television, too.

There may be a few other workable shots in the mix, but I am happy enough to have met my goal in at least one capture. Most importantly, Marc and I had an absolute blast at this location watching the light fade through the blue hour. I will definitely go back on my next visit for this and a few other locations on the island that will be fun.