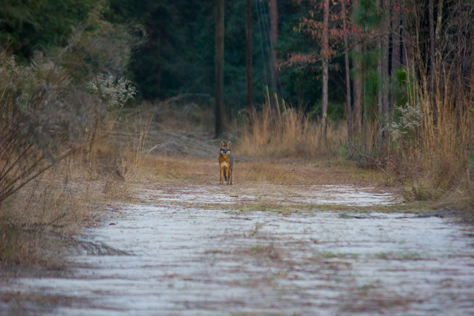 A gray fox (Urocyon cinereoargenteus) on the Stagecoach Road Trail east of the trail to the Lime Sink youth campground in Suwannee River State Park.

My family and I are no stranger to Florida's wonderful state parks. For the past several years, we have dispensed with the traditional approach of Thanksgiving at home instead selecting from one of 180 parks and camping for the holiday.

While this creates more work for Mom and Ross, we all enjoy having an opportunity to get together and camp one more time per year. Thanks to Mom's advance food preparation and their modest RV's kitchen amenities, we are able to have our classic Thanksgiving meal in nature under a tree canopy.

For this year's trip, we decided to revisit a park that we had previously enjoyed, Suwannee River State Park. We always scout for ideal camping sites at each park that we visit and had previously decided on Site 30, situated in the northeast corner of the loop with a lot of open space and relative privacy. 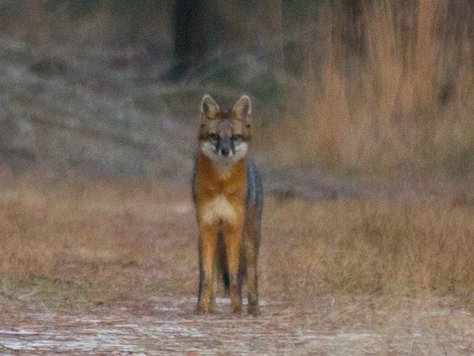 During our four-day visit, we took to the nature trails as usual and located spots where animal sightings, particularly around dusk, would be most likely to occur. There were some white-tailed deer, Florida Sandhill cranes and an armadillo. Fairly standard fare, but unlike Lake Kissimmee State Park which is teeming with wildlife, Suwannee River State Park does not have as many (visible) animals.

After hiking several different trails on Saturday, Mom and Ross decided to return to the campsite to prepare dinner. As we walked back, Mom suggested that I return to the nearby Stagecoach Road Trail to see if I could spot any more animals since we would be leaving late the next morning.

I did so and proceeded east. Not to be confused with the nearby Suwannee County Road 132, the trail called Stagecoach Road was used in the 1800s as a route for stagecoaches carrying people, cotton and other supplies to and from a ferry at the intersection of the Suwannee and Withlachoochee Rivers.

There were a few white-tailed deer foraging, but they ran off before I could even take a photograph. Continuing past the trail leading to the Lime Sink youth campground, I went around some fallen branches and over a hill. I could now see ahead that there was something on the trail that at first looked like a dog. 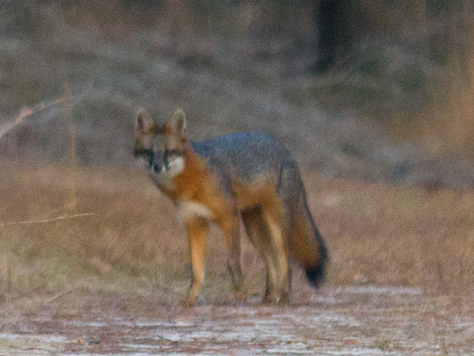 I immediately started shooting with my Canon EF-S 55-250mm f/4-5.6 lens at its maximum focal length. It took but a moment for me to realize that it was fox! It stared right at me as I shot several frames, before moving forward a bit and then to the edge of the trail.

Unfortunately, it bolted as soon as I took a few steps closer for a better view. When it ran, three or four white-tailed deer that I had not seen amongst the nearby trees were startled and quickly ran in the opposite direction. Only two minutes would pass before I was again alone on the trail.

Taking the long way back to the campsite along the Lime Sink Run Trail, I would not see any other deer or wildlife of note. Upon my return, I next had the task of informing Mom and Ross of my luck. Fortunately, the pictures are good enough for Mom; she indicated her plan to show them off proudly.

Looking at the photographs on the camera, we assumed that I had encountered a red fox (Vulpes vulpes) but it was actually a gray fox (Urocyon cinereoargenteus). Due to the abundance of red fur on some gray foxes — referred to as "red-sided grays" by some — the Florida Fish and Wildlife Conservation Commission says that they may be easily confused for red foxes.

With this being my first fox sighting in a state park, I am naturally quite pleased to have had and captured the experience. Although it did not make any vocalizations so that I might answer that now popular question with firsthand knowledge, coming across this gray fox gave me something else wonderful and unexpected for which to be thankful this year. 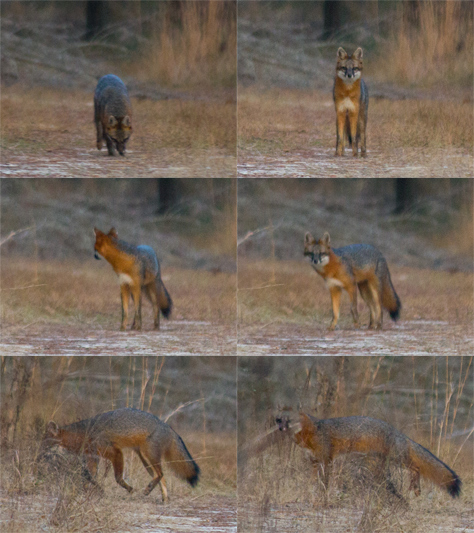