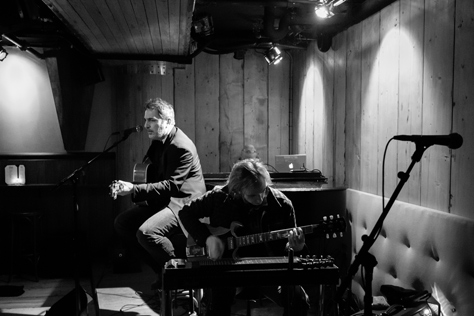 Blow Up Hollywood featuring Steve Messina with Harvey Jones and Thad Debrock during the sound check on Stage 3 at the Rockwood Music Hall in New York City before the premiere show in the "Blue Sky Blond" album tour.

Last year while Blow Up Hollywood was raising money to help promote and tour their new Blue Sky Blond album, band leader Steve Messina posted an essay regarding one of the new songs.

"The story behind the song 'marjorie'…" is a touching and true account about how music can impact us. I had shared it on Twitter at the time, but wish to reproduce it here.

The song "Marjorie" is lovely enough, striking an even deeper chord after one learns the context behind it. You can listen to a clip of the song on the Blue Sky Blond album page and then read Steve's essay below. 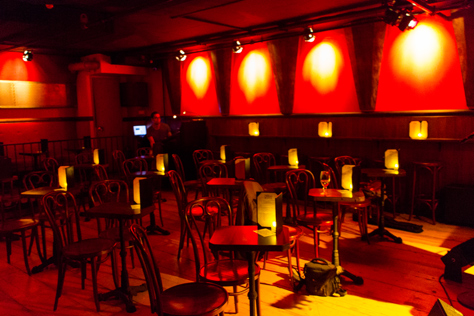 The story behind the song 'marjorie'…
by Steve Messina
Tuesday, 21 May 2013

In 2002, when we first released our self-titled debut CD, there weren't many ways to purchase music from independent artists. Amazon was still new, and had yet to accept independent music. Websites like iTunes and CD Baby didn't exist. One of the only avenues, outside of purchasing music at live shows, was to mail order it directly from us using a check or money order.

That first year, we received a few orders per week. Being the small operation that we were, I would personally fill them myself. On occasion, the customer might write a little note with a special request or just some short nicety, but generally, there was just a check with the request for our only CD.

In the beginning, I enjoyed opening the mail and finding our fan base slowly growing. It was interesting to see where each order came from. Which parts of the state, country and world the music was reaching. But there was one order I received that really stood out among the rest.

It was the only envelope I can remember receiving with actual cash in it; a mixture of some old crinkly dollar bills and at least one dollar in assorted change. It contained a long four-page letter written in pencil with very poor penmanship, making it difficult to understand. After reading it numerous times, I was finally able to decipher the writing.

The letter was addressed from Oklahoma City, Oklahoma, from a woman named Marjorie Van Buren. She explained that she discovered the music one late night, while listening to a local college radio station, and was particularly moved by what she heard. Having fallen ill over the last year, she took great interest in the concept expressed in the lyrics about a soul searching for heaven in the after-life. She also found great comfort specifically in the song "Coming Home."

Marjorie went on to tell me other tidbits about her life and from what I could gather it was one filled with strife and struggle, but with a positive outlook for the future. I was moved by her story and the fact that someone with so little money would be willing to part with it for our music. So I wrote a short letter back thanking her for her kind words and support, encouragement for a speedy recovery, and sent off the CD.

In 2004, our second CD, Fake, was released and by this time there were far more places to purchase it online. The mail orders still came in, but now the majority of people were buying the music online. Again, an envelope addressed from Oklahoma and Marjorie arrived. She told me about hearing the new CD in the feature that was done on NPR and John Diliberto's show entitled Echoes.

She was again very generous about her enjoyment of our music and updated me on her deteriorating health. I replied with a letter of hope and optimism and sent off the CD with a few special items. One was a book I love and often turn to for my own spiritual empowerment, The Mysticism of Sound and Music by Hazrat Inayat Khan, a Sufi philosopher and musical virtuoso who lived in the early twentieth century.

More time passed and we released Stars End and then The Diaries of Private Henry Hill. And again more letters from Marjorie, but this time there was good news, as her condition had seemed to stabilize, if not improve.

After 2006 and the release of The Diaries CD we did not release any music for quite a while. It was a very quiet time for the group, as other things were taking precedence in my life. In the fall of 2010 we released Take Flight and then in the spring of 2011 the Collections CD, but there was no word from Marjorie.

Of course, there was a part of me that wondered if she soured on the music. All of our releases have a wide variety of styles and sonic qualities to them and I can certainly understand that not everything we do will resonate with everyone all the time.

I've often received e-mails and letters from dedicated and supportive customers who have explained that a certain release wasn't their cup of tea, and I always appreciated the discourse and honesty. Maybe we lost her in all the musical changes and all the time that had passed between records.

Then in the June of 2011 I opened my mailbox and noticed a letter addressed from Oklahoma, from a woman by the name of Hazel Van Buren. I immediately recognized the name and wondered if this could be just a coincidence. When I opened the envelope, there was no check or money order inside — nothing but a typed letter on paper with a professional letterhead.

The letter was simple and short, from Hazel, Marjorie's sister. It began…

To Whom This May Concern;

I wish I were writing this letter under better circumstances. My sister Marjorie Van Buren was quite the admirer of your music. Whenever she had the opportunity she would play certain pieces for me, her other family members, and friends with great enthusiasm.

I think you might be aware of her fragile health, as she explained to me that you occasionally exchanged letters. I regret to inform you that she passed away on May 22nd of this year. I was by her side in her final moments and she requested that we play your song "Coming Home" at her funeral. It was an uplifting addition to a very difficult ceremony. I listen to that now quite often and think of her.

I just wanted to thank you for bringing a little light into a dark time for her. It meant a great deal. She's in a better place now and she will live on in spirit.

After reading the letter I was overcome with great sadness. I was stunned and mournful that this young woman had passed away far too early. Then as the moments passed, I became quite moved that the music meant so much to her and that her sister took the time, in the middle of her grieving, to inform us. A few days later I sent a card and a short message with my condolences.

For the first few weeks after receiving the letter from Hazel, I thought about Marjorie quite often. It was strange considering I really did not know her very well, just a few short letters over a period of years, and in none of those letters did she reveal anything super personal, outside of her illness. But knowing her situation and how much the music meant to her made me feel that we were quite close and perhaps somehow spiritually connected.

More time had passed and my thoughts turned to work on our new record, Blue Sky Blond. We had our first session with the band in February and had recorded a dozen songs with multiple versions over the course of two days. Then, as is our habit, we took a little time to assess the results and go from there. We had done a little more work on the music over the coming months, and I knew I needed to do more writing for it to be complete.

Sometime in early September, my wife Kim and I were planning to go out to lunch on a beautiful mid-afternoon day. The sun was shining, and a crisp blue summers' sky filled the air. As she was getting dressed and ready to go, I decided to pick up the guitar and strum a few chords while I waited. It was a very common chord sequence with a folk feel to it. Without thinking I began humming this little sweet and simple melody to go along with it.

There was something to it that just felt right. It was so easy and natural. As Kim finished getting dressed, I began to play the chords and hum the melody for her. I couldn't possibly leave now. I needed to put lyrics to this immediately. So we decided she would bring lunch back instead. In the 20 or 30 minutes she was gone the lyrics just poured out of me. And by the time she returned it was complete. No struggles. No need for rewrites.

It was a tribute to Marjorie, a woman who truly touched me and made me feel like the music was special to her. A song for someone I had never met, but felt very connected to. Someone who gave me the greatest gift a songwriter can ever receive, the knowledge that the music truly matters and can make even the slightest difference. 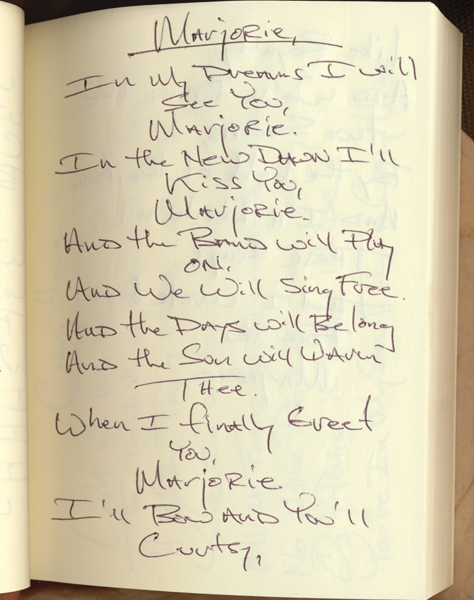 Above: the first part of the lyrics to "Marjorie" handwritten by Steve Messina