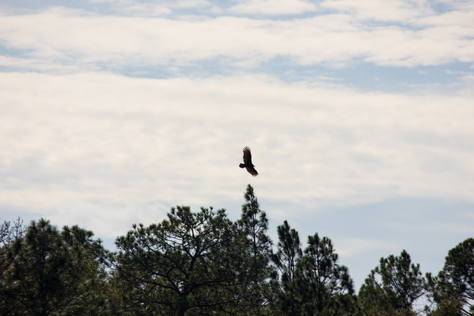 In the three years leading up to their 1939 declaration of war on Germany, the government of the United Kingdom secretly planned and developed the Ministry of Information. A centralized agency from which national propaganda and news releases could be crafted and distributed, a Ministry of Information was first briefly established in 1918 near the end of the Great War.

Correctly predicting the difficult times ahead, one of the earliest tasks assigned to the Ministry of Information by government leaders was to create a series of morale boosting posters that could be displayed in public across Britain. Simple, bold and featuring a graphic of the Tudor Crown[1], three posters were initially designed and produced between 27 June and 06 July 1939.

Displaying the slogans "Freedom Is In Peril / Defend It With All Your Might" and "Your Courage / Your Cheerfulness / Your Resolution / Will Bring Us Victory", the first two posters were distributed within twenty-four hours of the war declaration and posted on public transport, notice boards and in shop windows nationwide.

After "reports on civilian morale pointed to boredom rather than dislocation" and unease with the phrase, it was decided to hold back a third poster bearing "Keep Calm and Carry On" from the public. About 2.5 million copies of "Keep Calm" had been printed and shipped to distribution centers, but not displayed.

Attacked by parliamentarians for "failing to understand publicity" and by the press for wasting money[2] and paper, the entire campaign was terminated after four weeks. The unused "Keep Calm" posters were later destroyed in 1940 as part of the country's Paper Salvage program (1939–1950).

Fast forward sixty years to Barter Books in Alnwick, Northumberland owned by Stuart and Mary Manley. One day while going through a box of old books purchased at auction, Stuart discovered an original copy of "Keep Calm" folded up at the bottom. Liking the poster but not realizing its historical significance, Stuart and Mary framed and hung it in their shop. It was so popular with their customers that they started selling reproductions in 2001. 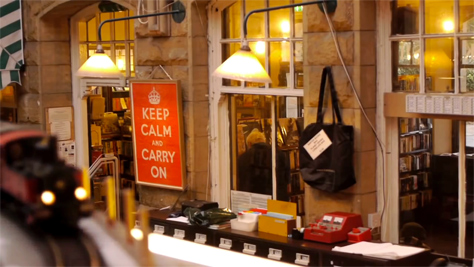 For whatever reason, the poster struck a chord with the modern world and soon other reproductions, parodies and homages were everywhere. As of February 2009, the Manleys had sold "more than 40,000 copies, as well as mugs, T-shirts, mouse mats, tea towels and postcards." It was thought that the only other original lithographs were at the Imperial War Museum, holding several copies in two sizes: PST 14847 at 751×501 mm and PST 14842 at 378×251 mm.

Like the Manleys, Moragh Turnbull of Cupar, Fife did not think much about the "Keep Calm" poster or appreciate its significance until she brought one to a recording of Antiques Roadshow at St. Andrews University in February 2012.

Turnbull explained that she had about fifteen "Keep Calm" posters which were passed down from her father William, who had been given them while serving in the Royal Observer Corps. Antiques expert Paul Atterbury explicated the history and informed Turnbull, much to her surprise, of the unique nature of her collection — the largest surviving cache known to exist. 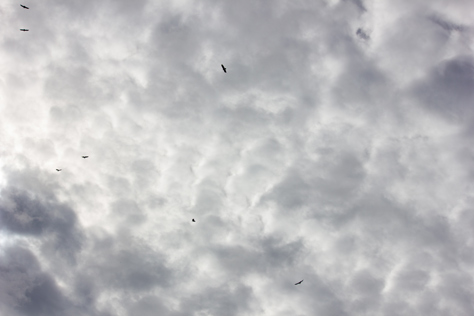 Beyond those in the Imperial War Museum collection and held by the Manleys and Turnbull, there are no other known original copies of the "Keep Calm" poster. Almost certainly there are a few others out there boxed in attics, just waiting to be discovered. In the meantime, the phrase and poster carry on in mainstream popular culture in Britain and worldwide.

Always a fan of paronomasia, I jokingly said the phrase "Keep Calm and Carrion" to my mother after spotting turkey vultures during an October 2014 camping trip. I also made an offhand remark about making a poster of it. While not an original idea, I decided to go ahead and make good on that remark.

It took some searching, but I recently found a free vector image of a vulture in flight that resembled the one in my mind. With that and the excellent "Keep Calm" font by Keith Bates in hand, I was able to make a mock-up in Photoshop followed by a vector drawing in Illustrator. 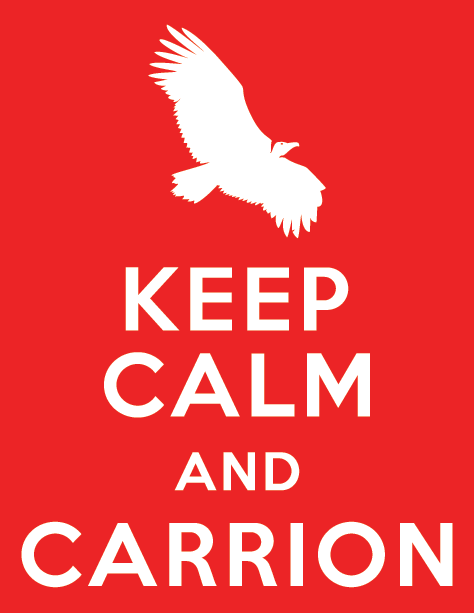 The artwork package contains the Illustrator AI vector original, formatted for print and ready for custom-sized export, along with six sizes of PNG.

If you print a copy of the poster or use it online, I would love to hear from you.

[1] Some refer to this incorrectly as Saint Edward's Crown. King Edward VII requested the standardization of the Tudor Crown image, the result of which was the Crown of King George VI design used in official emblems and "representing the sovereign source of governmental authority" from 1902 to 1953. Upon her accession in 1952, Elizabeth II requested a design change to the current version modeled after Saint Edward's Crown. Comparing the two and considering the timeline, the poster's Tudor Crown is clearly the low arched George VI version. 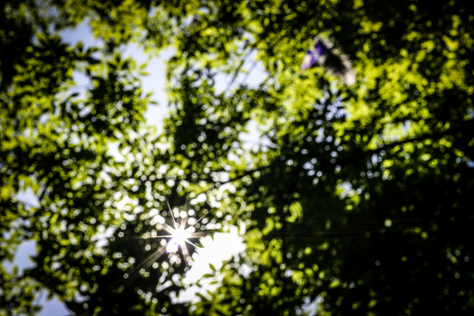 Sun starburst in the mature hardwood hammock canopy along the campground nature trail near a marsh overlook at Faver-Dykes State Park.

A little over a year after getting the Canon EOS 550D/Rebel T2i, my building curiosity about its ability to film high definition video led to an experiment. Taking far fewer photos than usual, I instead used my time camping at Faver-Dykes State Park to shoot 114 video clips on Sunday, 26 May 2013.

Using the strap, I figured out a way to hold the camera somewhat steady but it was still difficult. Despite some footage coming out with a nice Steadicam-esque look, it was too easy to knock the camera and produce a jarring bounce.

On the audio side, the built-in microphone is remarkably good at capturing the soundscape. Unfortunately but not terribly surprisingly, noises such as focusing the lens and adjusting my grip are extremely loud and distracting on playback. 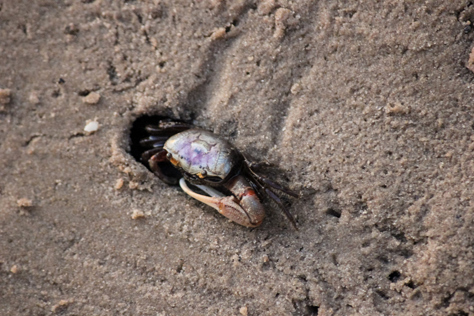 Nevertheless, I wanted to do something with the thirty-three minutes of footage from Faver-Dykes. Although the clips were shot as randomly as I would take pictures, I somehow managed to arrange a visual narrative of sorts and set it all to music by Blow Up Hollywood, naturally.

One of the more eclectic Blow Up Hollywood albums, Collections (2011) ends with one of my favorites, a reserved yet emotional song called "Sweet Memory". The selection of this song helped guide the video editing process and the atmosphere it provided was the perfect accompaniment to the visual style.

A work in progress since August 2013, I recently taught myself to process the video as I would stills for things like color and contrast. Finishing on Saturday, 31 January 2015, I rendered a final cut and then watched it on my television.

Considering that there was no planning beforehand, no shot list and it was my first attempt at such a venture, I am actually quite pleased with the result.

The above embed uses HTML5 to stream a 474×268 copy in either MP4 or WebM format to your browser. You can also download one of these smaller files directly if the embed does not work.

These options are faster to download, should suit a casual visitor and help me from burning through my monthly data transfer allocation. That notwithstanding, the full HD 1920×1080p MP4 (327.1 MB) is also available to download and watch.

Enjoy the film and if you like the song, please purchase yourself a copy.