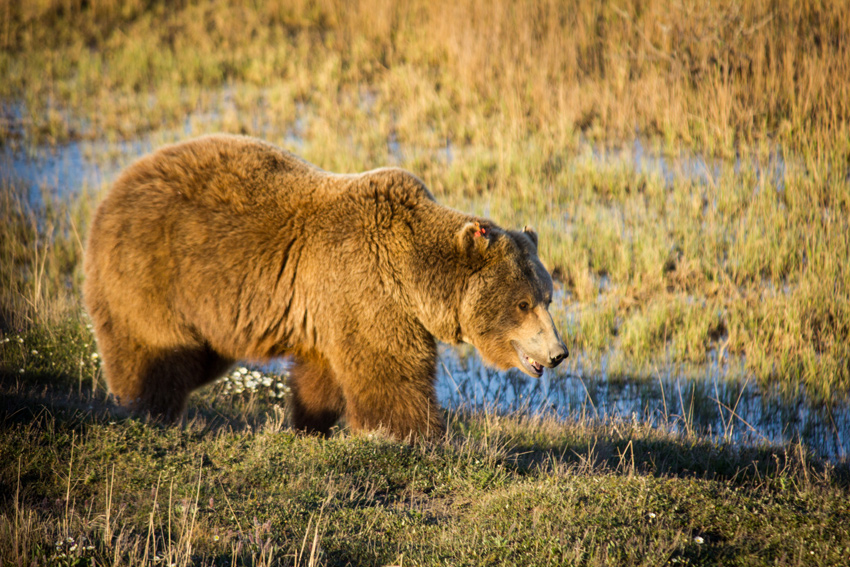 A brown bear (Ursus arctos) sow with two cubs walks past while hunting for Arctic ground squirrel (Spermophilus parryii) on the permafrost tundra near the Sagavanirktok River.

part of the Alaska 2017: Prudhoe Bay and Deadhorse album

I did not have the best view when the first encounter took place. Most of my photos of the brown bear sow with her two cubs in the tundra across the James W. Dalton Highway (AK 11) from Deadhorse Camp were shot through the windshield, covered in dirt from the mostly gravel roadway and filled with spidering cracks stretching across the length of the glass. Regardless, I tried my best to capture clear shots of the bear while she hunted for Arctic ground squirrel and her cubs amused themselves playing nearby.

We were just about two miles away from the end of the Dalton Highway, the conclusion of a unique and beautiful two-day journey from Fairbanks to Prudhoe Bay at the shore of the Arctic Ocean. Even though Deadhorse Camp was our lodging for the night and everyone, including myself, was very much ready to eat and sleep, I insisted that we finish what we started by driving to the very end of the Dalton at East Lake Colleen Drive. Just as we were passing our lodging to the left, Mom and Ross signaled about bears to the right. I pulled over to the shoulder and Mom and I started taking pictures in a frantic whirr of shutter clicks. 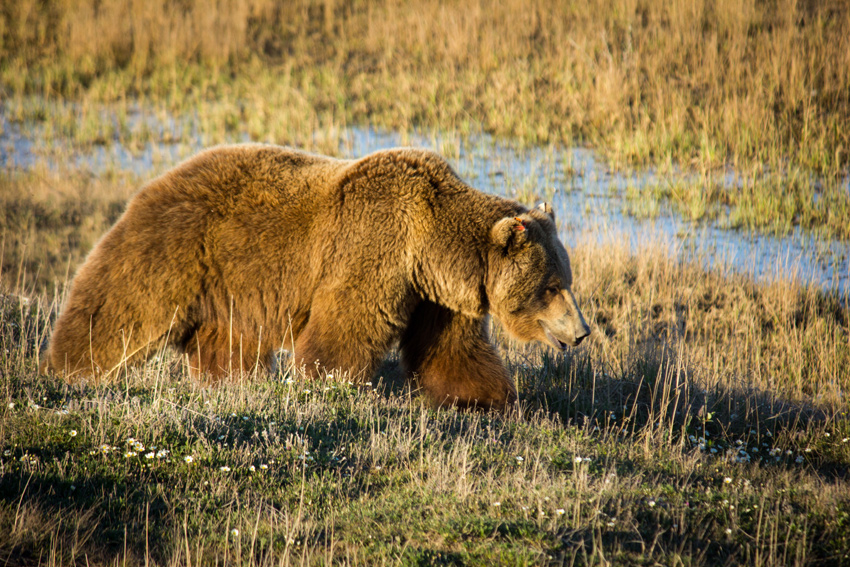 We watched in awe as the large brown bear, a grizzly but for her coastal habitat, jumped and pounded her paws on a sandy mound in the tundra, inside which was the shallow burrow home of some Arctic ground squirrels. Seemingly without much success, the bear performed her hunting dance again and again before moving to another nearby mound. Given our hunger and exhaustion, we watched for about ten minutes and then drove the final two miles of the Dalton. With the late hour, we decided to next return to the camp to get checked into our rooms and eat.

Returning to the tundra across the street from our prefabricated dwelling, elevated above the ground as most structures in the North Slope are to keep warmth away from the permafrost, we were delighted to see that the bear and her cubs were still on the search for food. I again parked along the shoulder of the Dalton, right at the edge to keep the roadway clear for the large trucks and other industrial vehicles that inhabit the region, and gave the passenger side the better view for Mom and Ross. Sitting as far forward as possible, I managed to avoid most of the windshield cracks but many of my shots are still blurry and distorted. 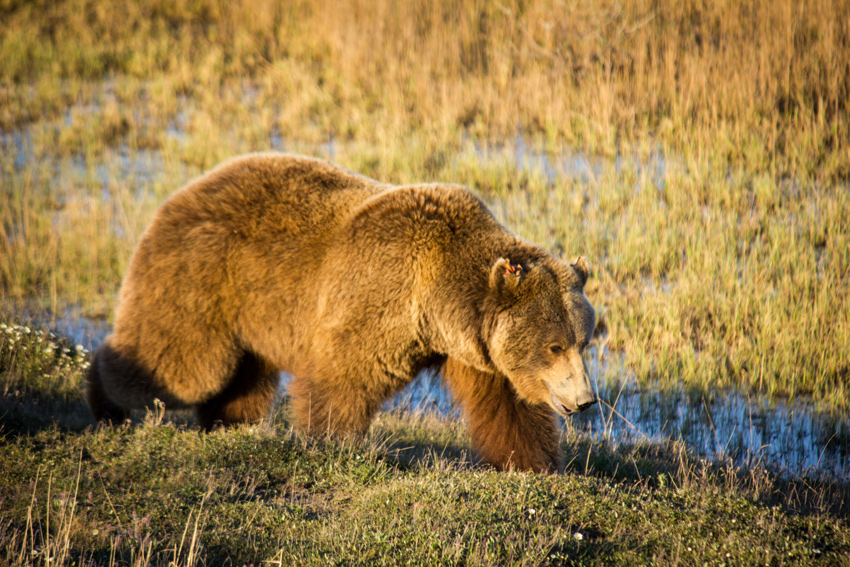 After ten minutes of what was a futile attempt to capture ground squirrels, the bear decided to move on. My excitement and heartbeat quickened as the amazing beast walked through the tundra southward and on a course that was bringing her closer to us. She did not get too far away before the two cubs, as cute as can be, ran along from behind to catch up.

Before I knew it she was alongside the car, still a safe enough distance that I could have gotten us out of there if needed, but close enough for my views of her out the open passenger window to be large in the viewfinder at 250 millimeters. You could even see that her ear was tagged. 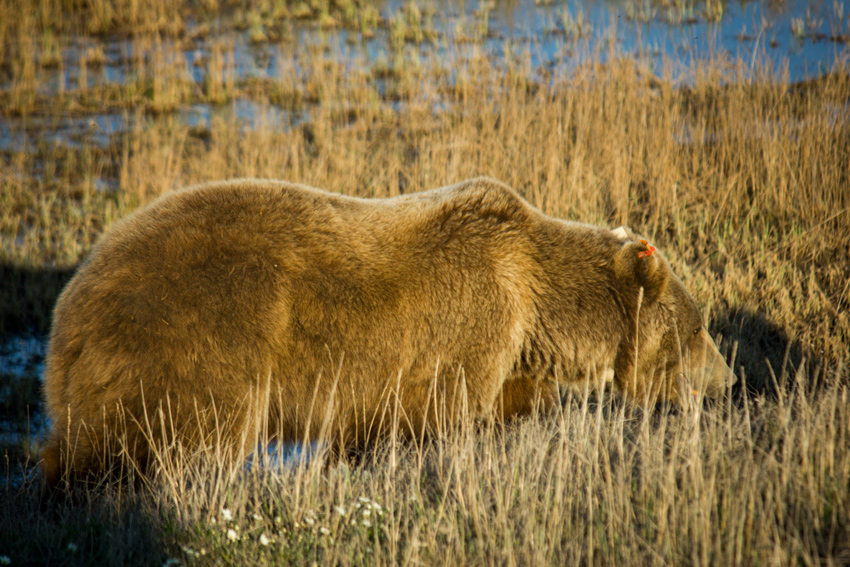 The mother bear paid us no attention as she and her cubs, playing with each other as they slowly tagged along not far behind, walked past and continued south on the tundra. This was no surprise as brown bears, as well as black bears, would generally prefer to avoid humans (polar bears, on the other hand, are ferocious and have been known to kill and eat people).

At one point as the bears walked south and further away from us, one of the cubs stopped to investigate something on the ground. It then turned around and looked in our direction, as if to check us out despite having been much closer moments before. It then turned back and trotted up to its sibling, who joined in resuming their playful outbursts while also following behind mother. 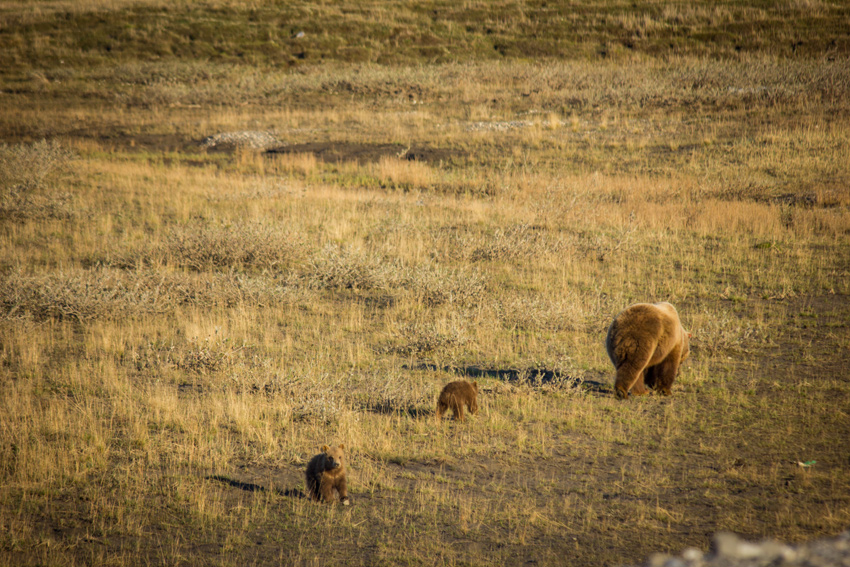 David July
"The Moment She Walked Past" https://mtsutro.org?p=1217