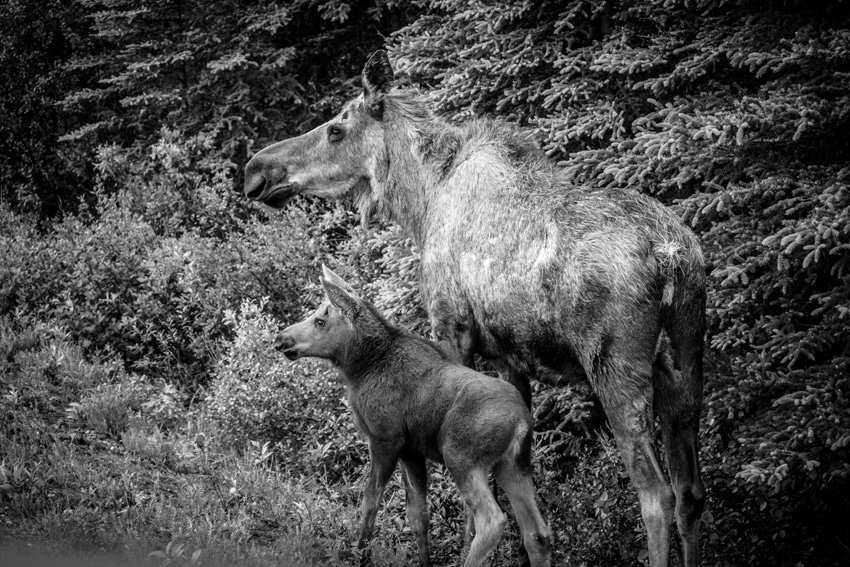 A moose (Alces alces) cow and calf stop to look across the road while foraging on the shoulder of Denali Park Road near C-Camp in Denali National Park and Preserve.

part of the Alaska 2017: Denali National Park and Preserve album

In the second floor area of Fairbanks International Airport where you queue for security screening, Alaska Airlines has a large display inviting travelers to take a selfie with its poster, a closeup of two moose standing and looking toward the camera with curiosity. I wish that I would have taken a picture of that display, because looking back it was an excellent symbol for the incredible journey that was then coming to a close.

My Alaska voyage was filled with amazing wildlife, some of it rather close, but it was the moose that kept making appearances throughout the state. I will even admit to regularly saying "moose moose moose" in a quiet, monotone chant as a way of calling forth those and other wild and native creatures. My first moose encounter in Alaska was a cow and her calf grazing along the road in Denali National Park and Preserve, spotted just after entering the park. I was very excited for this opportunity, little did I know that I would see moose much closer the following day. 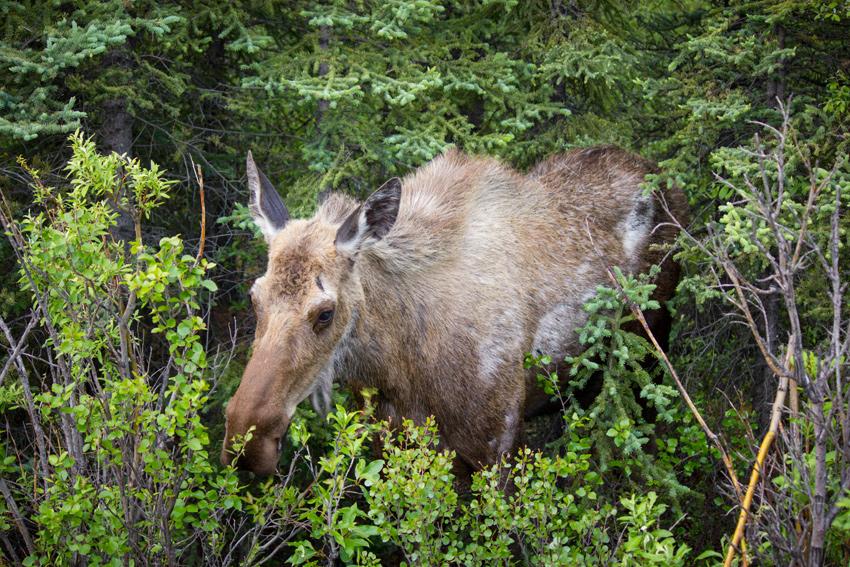 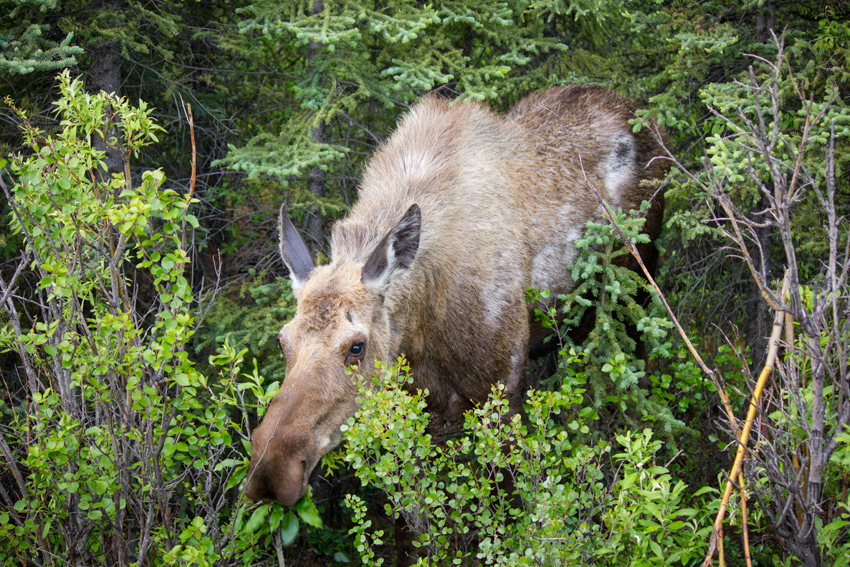 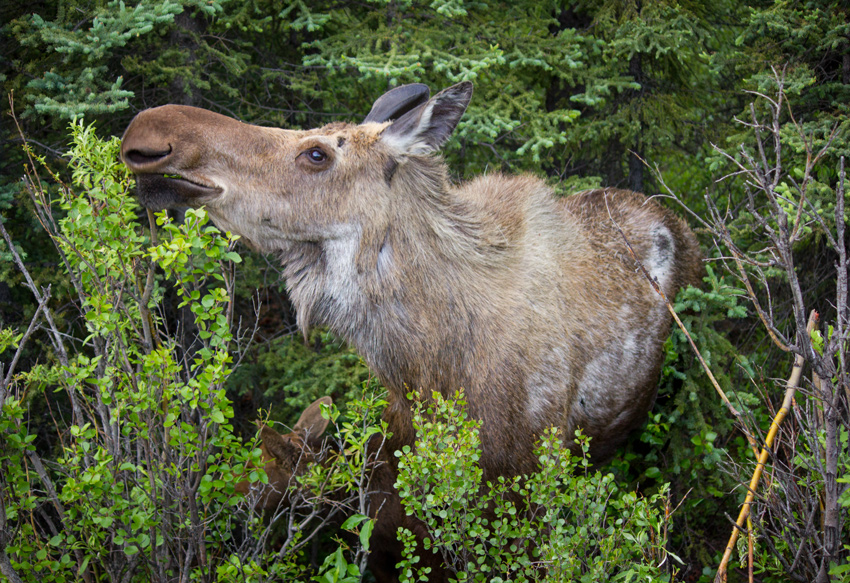 Thirty-one-and-a-half hours later, driving back to the Savage River Campground after having enjoyed dinner in the small commercial area on George Parks Highway just outside the park, we were on the lookout for animals as always. Approaching C-Camp, the National Park Service seasonal housing compound and maintenance yard, we pulled off to the side of Denali Park Road and came to a stop on the shoulder. There was not much room here, so the trees and plants of the forest were just outside my open window.

Looking into the thicket, we could tell that some animal was lurking nearby. It was likely to be a moose but I was not sure until the moose cow decided to approach, emerging from the dense woods into a small clear patch to munch on the leaves growing on plants alongside the road. She softly foraged, seemingly oblivious to the four-door pickup truck sitting a few feet away, its passengers rapidly snapping photographs at a clip modern technology makes all too easy. As she ate, you could see that she was not alone; her calf, lurking behind in the brush, came to stand next to its mother. 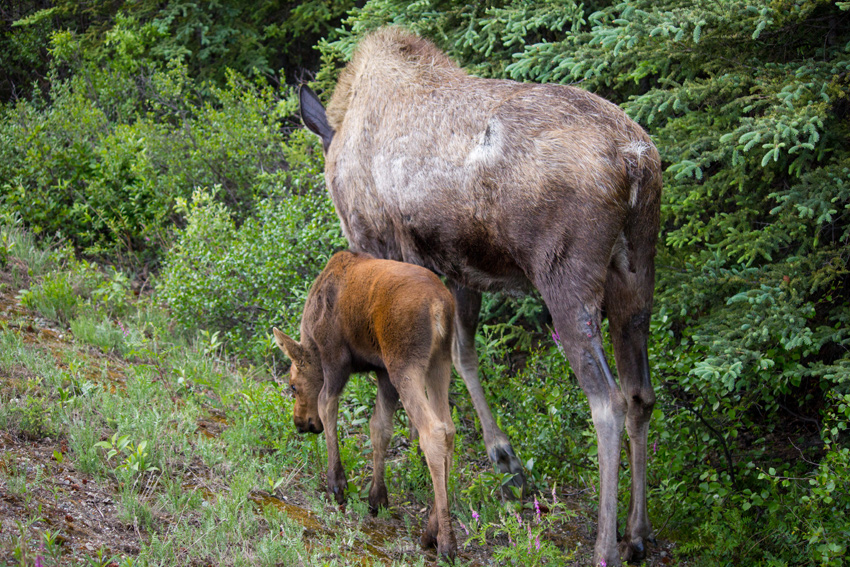 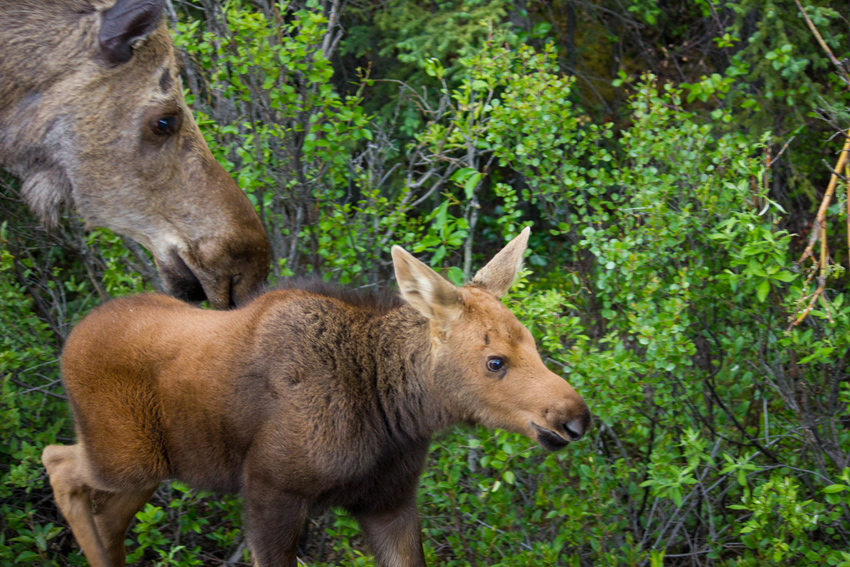 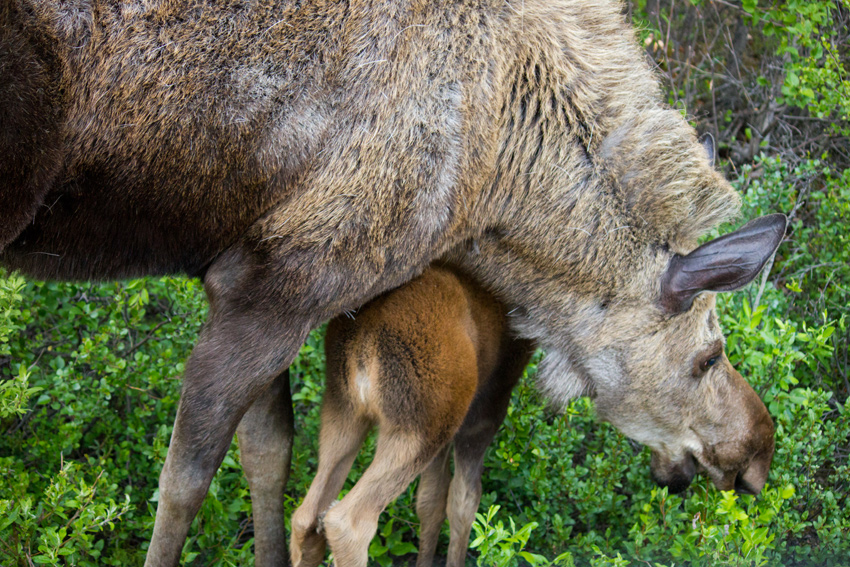 I assumed that after a short time, the moose would decide to withdraw into the forest with her calf, away from our truck and the humans inside. Instead, she approached onto the shoulder and walked forward away from us slowly, inspecting the brush for edibles along the way. The calf followed soon after and walked along closely with the cow, stopping as her mother did to look across the road, possibly at a passing vehicle. With multiple directions available, the moose's next move was a surprising one.

Instead of continuing forward, retreating into the woods or crossing the road to the wilderness beyond, the moose turned around and walked back toward us. As they passed by the truck, the calf first in front and then with its mother, I nearly could have touched them had I reached out the window. Clearly unafraid and not concerned about our presence, the cow even stopped to feed while still right next to us. The calf wandered back into the woods while the cow ate, but soon after reemerged and looked around. 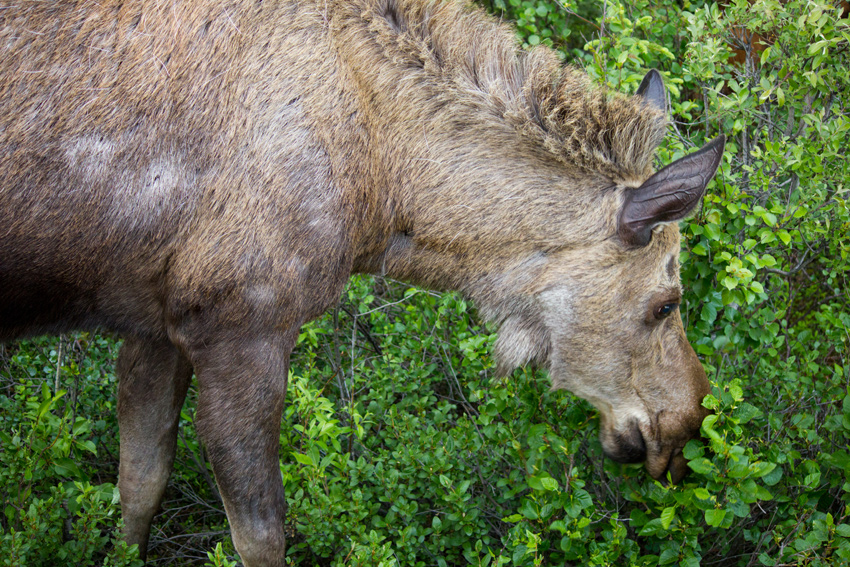 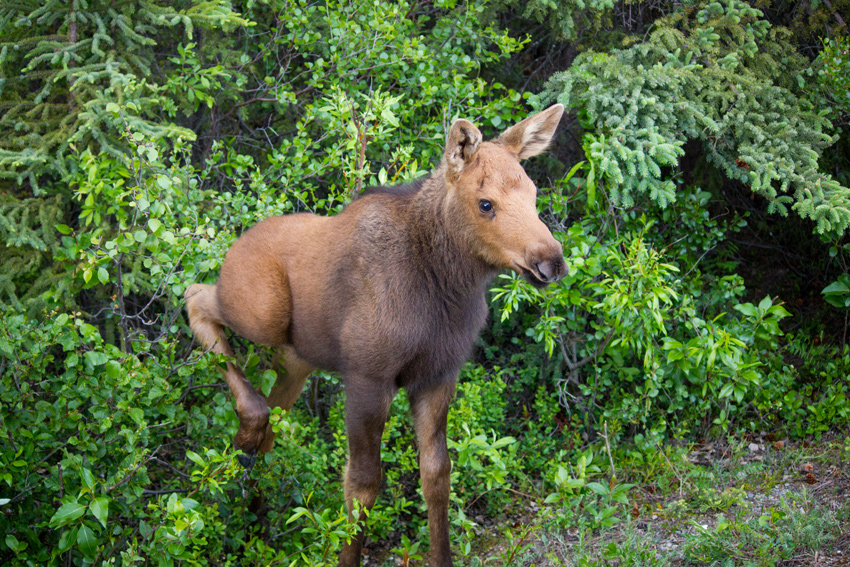 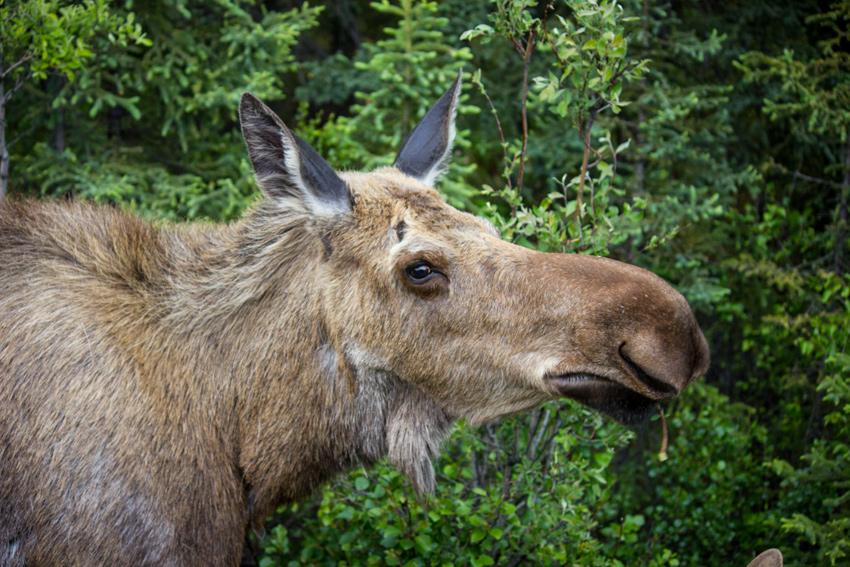 After about three minutes, the two moose resumed their previous course forward and away from us, occasionally stopping as before to enjoy the local herbivorous delicacies. The young calf, seemingly more interested in exploring its environment than feeding, approached the surface of Denali Park Road a few times and finally did eventually run across. The cow signaled for the calf to return and it trotted back across the road. Fortunately, there were few vehicles driving past at this hour.

Our moose encounter of about thirteen minutes looked to end once the moose did return into the dense forest. Based on where they entered the woods however, it appeared as if we might get another chance to see them on the road to C-Camp itself. We moved the truck to that road and pulled over to wait. Within five minutes, the moose reappeared and walked down C-Camp Road toward us and Denali Park Road. With a pace quicker than we had seen thus far, the cow walked along and then past us. The calf was not far behind, taking a more leisurely pace and stopping for a moment on the Roadside Trail to inspect something. 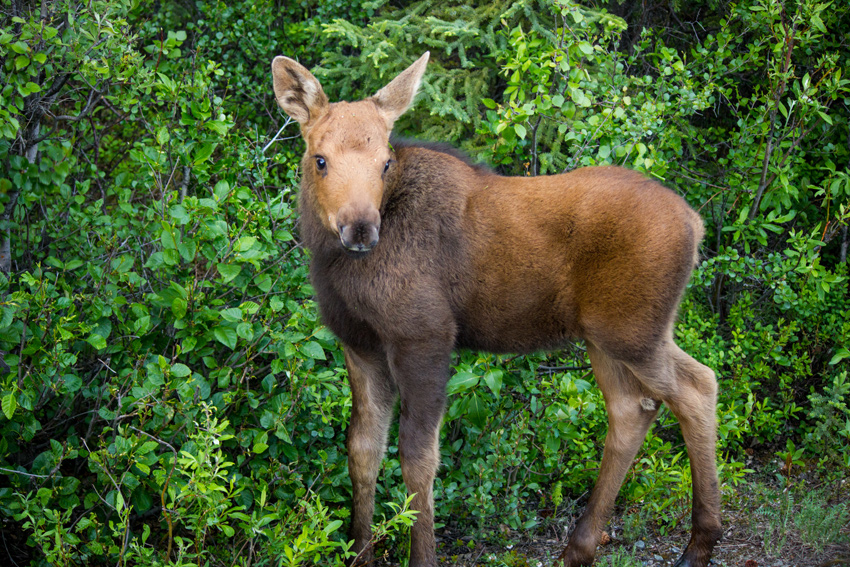 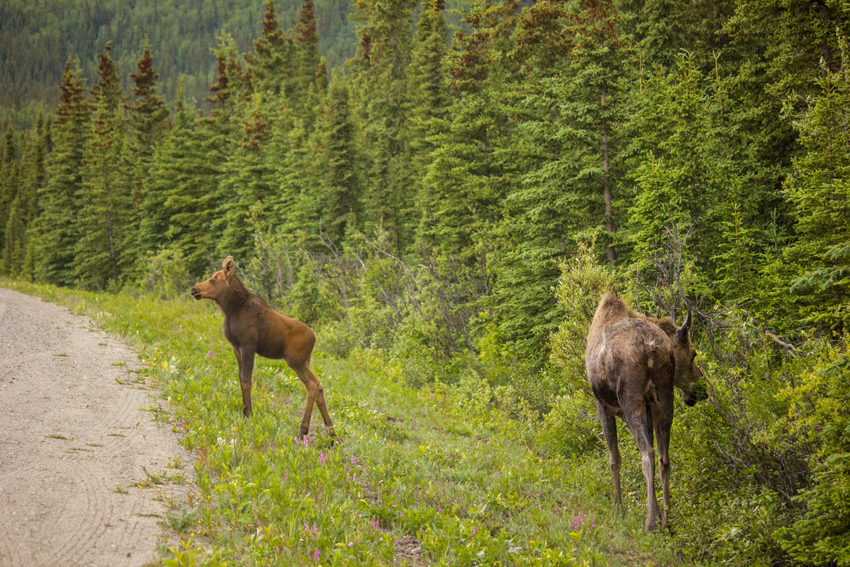 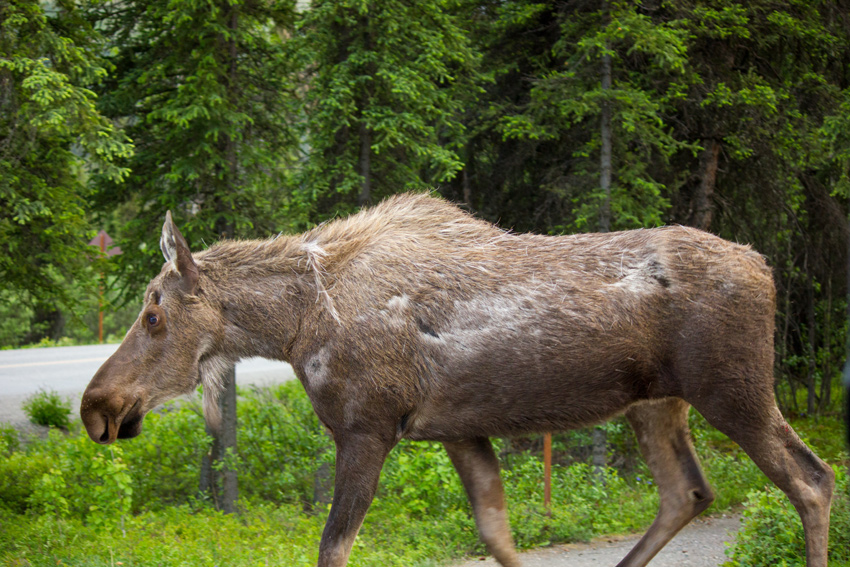 Now behind us and only visible at certain angles through the truck's side mirrors, we turned around and pulled forward to the intersection to watch the moose meandering down Denali Park Road. As we sat there watching the two moose walk away, the cow stopped in the road with the calf at her side. She turned her head left and looked back at us, which her calf cutely mimicked. The cow finally crossed the road and wandered back into the woods, leaving the calf alone on the pavement for a moment before it tagged along and disappeared into the woodland. 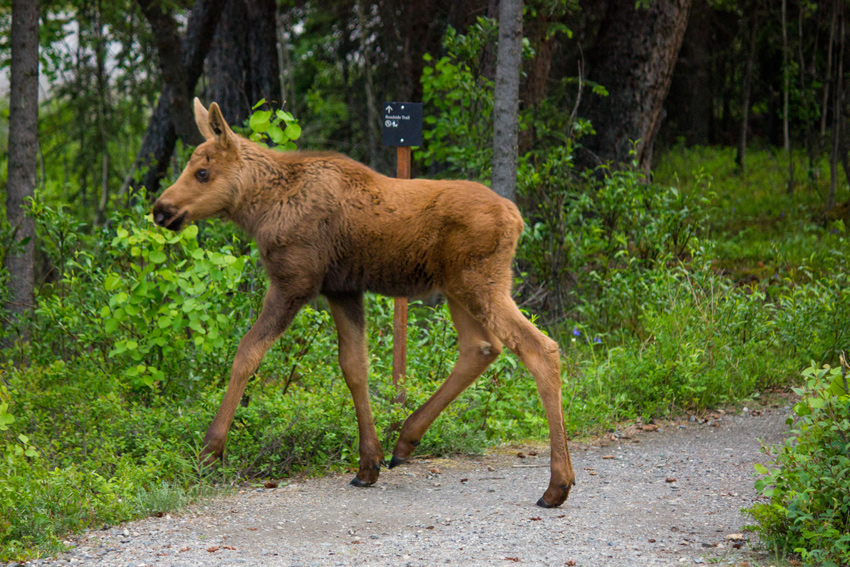 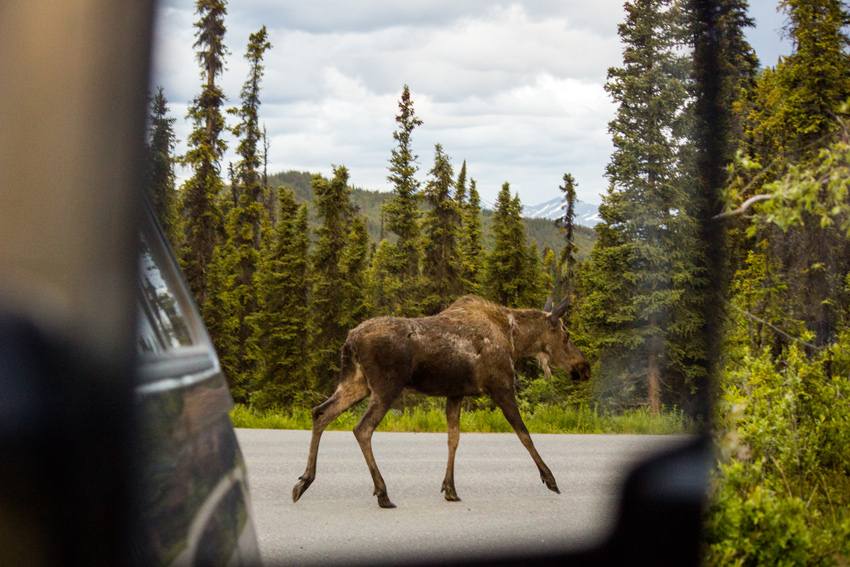 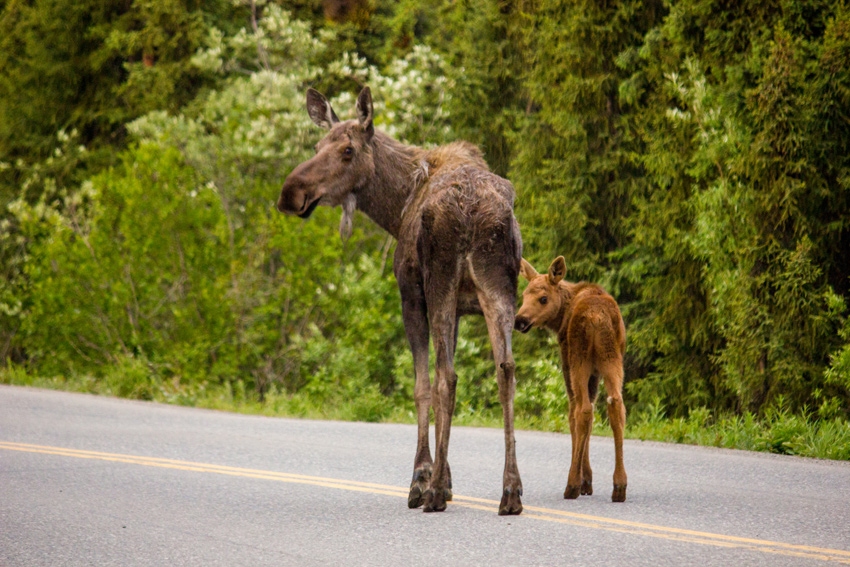